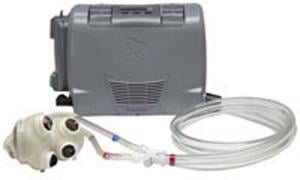 February 17, 2011 – On Jan. 15, after 864 days of life with an artificial heart, Charles Okeke received a dual heart and kidney transplant at the Mayo Clinic Hospital in Phoenix. Okeke had been implanted with the Total Artificial Heart, from SynCardia.

Okeke made headlines in May 2010 when he became the first Total Artificial Heart patient in U.S. history to leave the hospital without a human heart. He was able to return home as part of an FDA-approved Investigational Device Exemption (IDE) clinical study of the 13.5-lb Freedom portable driver.

On Sept. 3, 2008, Okeke was implanted with the device after his body rejected his previous donor heart transplant he’d received at age 30. For more than 600 days, Okeke was confined to the hospital by the only FDA-approved driver for powering the artificial heart, the 418-lb “Big Blue”. Due to the previous transplant, Okeke’s body produced antibodies that made it challenging for him to receive a matching donor heart.

In March 2010, SynCardia received approval from the FDA to conduct an IDE clinical study of the first U.S. portable driver designed to power the device both inside and outside the hospital. On May 3, 2010, Okeke was discharged from the Mayo Clinic wearing the driver in a backpack. He returned home and was supported by the driver for 253 days.

This was only the third time in the world that a patient was bridged to a dual heart and kidney transplant with the Total Artificial Heart.