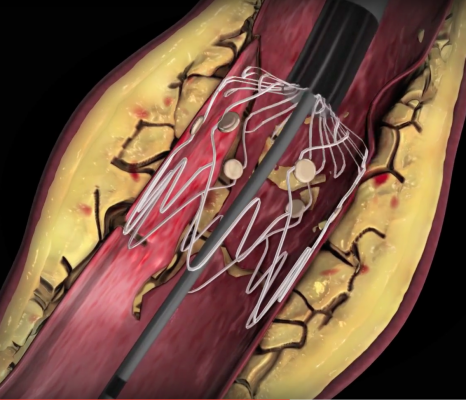 August 24, 2016 — Intact Vascular Inc. announced that the one-year results from its Tack Optimized Balloon Angioplasty (TOBA) clinical study were published in the July 2016 edition of the Journal of Vascular Surgery.

The TOBA study enrolled 138 subjects at 13 sites in Europe. All study participants were suffering from peripheral artery disease caused by blockages in the superficial femoral or popliteal arteries, which are located in the upper part of the leg. All participants underwent percutaneous balloon angioplasty (PTA) with any dissections (or tears) resulting from PTA repaired using the Tack Endovascular System.

The Tack implant is a new technology designed to repair dissections in the artery wall that frequently occur as a complication during PTA. The system allows physicians to repair these dissections while leaving a minimal amount of foreign material in the artery, which reduces mechanical stress on the artery; leaves the artery in its most natural state; and preserves future treatment options. If the dissections are left unrepaired, they increase the probability of acute artery occlusion or may continue narrowing the artery.

Some key conclusions from the TOBA study included:

Marc Bosiers, M.D., A.Z. St. Blasius Hospital, Dendermonde, Belgium, was the principal investigator for the TOBA study. Bosiers stated, “These one-year results from the TOBA study demonstrate that the minimal metal approach associated with the Tack implant produces positive, lasting results in patients with severe peripheral artery disease. This is a high-cost, resource-intensive disease, so treatments with long-term effectiveness, such as combining angioplasty with the Tack implant, bring substantial benefits for patients and payers alike.”

Peter Schneider, M.D., chief of vascular at the Kaiser Foundation Hospital in Honolulu, Intact Vascular’s co-founder and chief medical officer, added, “This first, large-scale study investigating the safety and efficacy of the Tack Endovascular System is a key building block for the broad clinical development program we are pursuing at Intact Vascular. Plain PTA in this setting typically has a one-year patency rate of 30-55 percent. When we added the Tack device to the treatment, the one-year success was improved to 76.4 percent. Our next studies involve combining the Tack system with drug-coated balloon angioplasty, which is the focus of our TOBA II and III clinical trials.”

Based on these results, Intact Vascular has been enrolling participants in an expanded study, TOBA II  that is being conducted at more than 35 U.S. and European centers under an Investigational Device Exemption (IDE) approval. The company plans to submit data from TOBA II in support of a pre-market approval application with the U.S. Food and Drug Administration (FDA).

Recently, the company commenced enrollment in TOBA III, a post-CE Mark study conducted in Europe to assess the combination of the Tack implant and drug-coated balloon angioplasty in the superficial femoral and popliteal arteries.