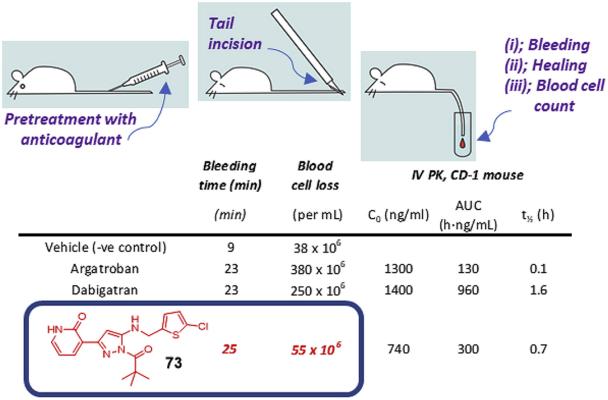 December 14, 2022 — Verseon announced that the European Journal of Medicinal Chemistry has published a paper describing the company’s groundbreaking research that led to promising novel drug candidates for cardiovascular disease. Cardiovascular disease is the leading cause of death and disability in the world. Hundreds of millions of patients worldwide need anticoagulants to prevent clots that lead to life-threatening events like strokes, heart attacks, and pulmonary embolisms.

The peer-reviewed paper documents how Verseon’s medicinal chemistry team optimized various physicochemical properties — including potency, selectivity, and in vivo stability — of compounds from a novel class called N-acylpyrazoles. The resulting selective reversible covalent thrombin inhibitors are highly effective at preventing clots in animal models. Yet unlike NOACs, they do not inhibit thrombin-mediated activation of platelets, a critical step to stop injury-induced bleeding. Because of their unique mechanism of action, Verseon’s drug candidates have shown far lower bleeding risks in animal models.

“We are pleased to document the great work and insights that went into the discovery and development of this novel class of direct thrombin inhibitors with unique pharmacology,” commented Dr. David Kita, Verseon’s Chief Scientific Officer. “We look forward to describing further work behind the development of our first PROAC clinical candidate (VE-1902), which we expect will address a significant unmet medical need affecting a very large number of cardiovascular patients worldwide.”

The scientific paper, entitled “Discovery of novel N-acylpyrazoles as potent and selective thrombin inhibitors,” is available at https://doi.org/10.1016/j.ejmech.2022.114855.