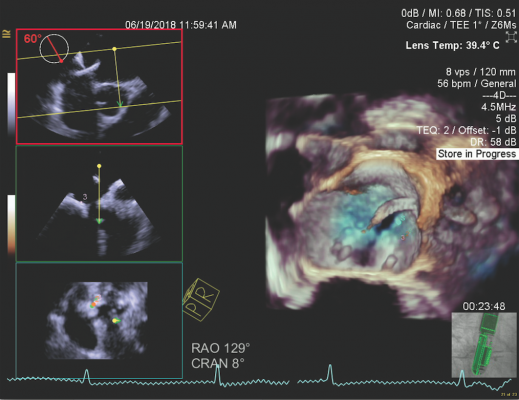 September 11, 2019 — Percutaneous reduction of secondary mitral regurgitation in patients with heart failure does not lower death and hospitalization at two years compared to standard medical care, according to late breaking results from the MITRA-FR study. Results were presented in a Hot Line Session at the European Society of Cardiology (ESC) Congress 2019 together with the World Congress of Cardiology, Aug. 31-Sept. 4 in Paris, France, and published in the European Journal of Heart Failure.[1]

The benefits of percutaneous correction of secondary mitral regurgitation in patients with heart failure is controversial. One-year results of MITRA-FR, first reported at ESC Congress 2018 and published in the New England Journal of Medicine, [2] showed no significant impact of mitral valve repair with the Abbott MitraClip device on death and heart failure hospitalization compared to standard medical treatment. In contrast, the COAPT study found that valve repair significantly reduced heart failure rehospitalization and death after two years of follow-up.[3]

“Many hypotheses have been suggested to explain the different outcomes between the two randomized trials,” said MITRA-FR principal investigator Prof. Jean-Francois Obadia of Civil Hospices of Lyon, France. “One theory is the longer duration of COAPT. We therefore conducted a two-year follow-up of patients in MITRA-FR.”

Watch the VIDEO: Impact of the COAPT Trial on Heart Failure Patients With Functional Mitral Regurgitation

“This analysis confirms the absence of a significant difference in the rate of the composite outcome of death from any cause or unplanned hospitalization for heart failure in symptomatic patients with severe secondary mitral regurgitation treated by percutaneous mitral valve repair plus medical treatment as compared with those receiving medical treatment alone,” said Obadia. “Percutaneous repair remained safe – there was a very small number of prespecified serious adverse events.”

“This repeat event analysis was used as the main endpoint in the COAPT trial and tends to amplify differences compared to the analysis of time to first event, which was the main endpoint in MITRA-FR,” said Obadia. “As for any exploratory analysis of secondary endpoints, the interpretation of such an isolated finding should be viewed cautiously and only considered hypothesis-generating.

Regarding the differing results between the two trials, Obadia said, “In our view, one of the main reasons is patient selection. Differences in inclusion criteria led to more severe mitral regurgitation, less pronounced left ventricular remodelling, lower pulmonary pressure and better right ventricular function in COAPT compared to MITRA-FR. In addition, the run-in period assessed by a central eligibility committee was likely to result in more optimized guideline-directed medical therapy in COAPT than in MITRA-FR. However, this setup may be difficult to implement in everyday practice which rarely achieves optimized therapy.”

Obadia said that medical treatment should remain the first line of treatment for heart failure patients with secondary mitral regurgitation. “MITRA-FR and COAPT provide answers but also more questions,” he said. “The definition of secondary mitral regurgitation has to be revisited taking into account the dynamic function of the heart. More studies are needed to clarify understanding of this complex disease.”