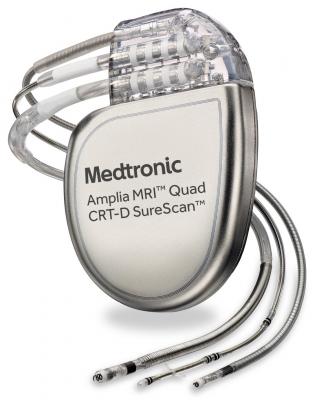 March 7, 2017 — Medtronic plc recently announced an economic analysis of five-year data showing that patients with mild heart failure who get cardiac resynchronization therapy (CRT) devices early in their treatment live longer. The analysis also showed that implanting these devices is cost-effective, compared to optimal medical therapy. Results from the REVERSE (REsynchronization reVErses Remodeling in Systolic left vEntricular dysfunction) trial were published in the Journal of the American College of Cardiology: Heart Failure.

CRT is an established treatment for indicated patients with heart failure that has been demonstrated to improve survival and quality of life, and reduce hospitalizations. However, despite significant clinical evidence and guideline recommendations in support of CRT, studies have shown the therapy to be underutilized in eligible patients.

REVERSE is the largest study to assess the long-term clinical impact and survival benefit of devices combining CRT with a defibrillator compared with CRT pacemakers. It is also the first study to show the cost-effectiveness of CRT when implanted earlier in the disease state, according to Medtronic.

"These new data expand upon the current evidence and guidelines for the treatment of heart failure, by showing that CRT in patients with mildly symptomatic heart failure is beneficial, both from a clinical perspective, as well as from a financial perspective," said Michael R. Gold, M.D., Ph.D., chief of cardiology, Michael E. Assey Professor of Medicine at the Medical University of South Carolina. "REVERSE confirms that implanting CRT earlier slows the progression of heart failure, reduces heart failure-related hospitalizations and deaths, and prolongs life, all while being very cost-effective."

REVERSE was a prospective, randomized, double-blind study of 610 patients with mild heart failure (those designated New York Heart Association Class I/II) from North America and Europe. All patients were implanted with a CRT-pacemaker (CRT-P) or -defibrillator (CRT-D) and randomly assigned (2:1) to either CRT-ON or CRT-OFF.

Previously published REVERSE findings showed a trend that CRT-ON increased survival by nearly 23 percent (52.5 percent vs. 29.7 percent, p=0.21), leading to an expected survival rate of 9.76 years for CRT-ON versus 7.5 years for CRT-OFF.

Based on these findings, the new analysis shows, for the first time under the Medicare setting, that CRT is a cost-effective option for patients with mild heart failure: CRT-ON yields an incremental cost effectiveness ratio (ICER) of $8,840 per Quality-Adjusted Life Year (QALY) gained over a patient's lifetime, compared to CRT-OFF. (ICER is a statistic that summarizes the cost-effectiveness of a healthcare intervention, and QALY is a measure of the quantity and quality of life.)

Additionally, REVERSE has shown that CRT-D provides a significant improvement in survival — 2.77 additional years of life — compared to CRT-P devices. This benefit results in a first-of-its-kind finding that CRT-D is a cost-effective alternative to CRT-P, yielding an ICER of $43,678/QALY gained over the patient's lifetime, lower than the benchmark for therapy cost effectiveness of other serious chronic conditions that cost at least $50,000 per QALY gained. Thus, while CRT-D costs more than CRT-P, the added 2.77 years of life justify the additional cost over a patient's lifetime.

Finally, these analyses show CRT delays disease progression, which means that initially implanting a CRT-D is essentially cost-neutral compared to implanting an ICD and implanting a CRT-D later, when the disease worsens. With early CRT-D implantation slowing disease progress and increasing survival, and without any discounting of future benefits and cost applied, early CRT-D led to 1.24 years of additional survival, resulting in an ICER of $1,829 per year of life gained.