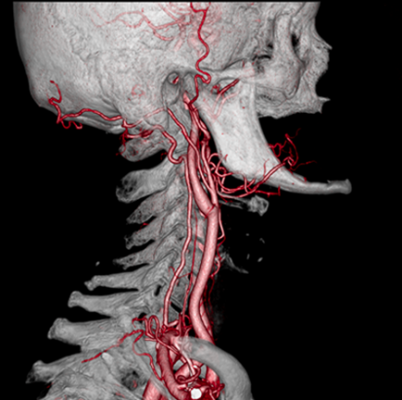 December 18, 2013 — Johns Hopkins Hospital surgeons say skipping one commonly taken step during a routine procedure to insert a wire mesh stent into a partially blocked carotid artery appears to prevent patients from developing dangerously low blood pressure, an extremely slow heart rate or even a stroke or heart attack.
Reporting on results of a study described online in the Journal of Vascular Surgery, the surgeons say inflating a balloon inside the artery after placing the stent greatly increases risk of serious complications. Current standard practice by most physicians is to inflate the balloon to open up the artery before placing the carotid stent and again afterward.
Carotid stents are designed to open up the neck arteries, which carry oxygen-rich blood from the heart to the brain but have been narrowed over time by a buildup of cholesterol, fat and other substances that stick to blood vessel walls. Unstable pieces of this plaque-like debris can break off and travel into the brain, where they can cause strokes.
“In my mind, this is a study that should change medical practice,” said Mahmoud Malas, M.D., M.H.S., associate professor of surgery, Johns Hopkins University School of Medicine, and leader of the study. “Our work suggests that doctors should never balloon a stent after placing it. There is no upside.”
Malas and his team analyzed data from 103 patients who underwent placement of a carotid stent between 2005 and 2012 at the Johns Hopkins Bayview Medical Center. All patients underwent pre-stent ballooning, and 70 percent of the patients also underwent post-stent ballooning. Patients who underwent post-stent ballooning were four times more likely to suffer from dangerously low blood pressure and/or a dangerously slow heart rate during or immediately after the procedure. Although Malas says the study was too small to absolutely end the practice of post-stent ballooning, that approach should be considered.
As part of his study, Malas also looked at data from a past study of more than 1,000 patients undergoing carotid stenting, which also hinted that post-stent ballooning increases the risk of stroke. The number of physicians forgoing this step, however, was too small to get a full picture, he says.
Patients are typically referred for a carotid stent when they have a blockage of 70 percent or more in the carotid artery and would be unsuitable candidates for a surgical procedure that involves cutting open the artery and removing the buildup. That surgery, known as an endarterectomy, is a more permanent fix but involves general anesthesia, which not all people with severe blockages are healthy enough to undergo. Many people with carotid blockages also have blockages in other arteries, including the coronary arteries.
Placing a carotid stent is a minimally invasive procedure that involves threading a catheter from the groin area up to the site of the blockage in the neck. Physicians gently inflate a balloon in the area that is constricted to open the artery wide enough to safely insert the stent. Those who again inflate the balloon afterward say it enables the stent to open as wide as possible and to show surgeons if the opening is large enough to reduce the risk of closing off in the future.
According to Malas, the metals used in the stent will naturally expand over time and that this second ballooning step is unnecessary. He said there is also added risk that repeating the balloon step can push pieces of unstable plaque into the brain, causing the very stroke the procedure is designed to prevent.
He also believes post-stent ballooning wreaks havoc on blood pressure and heart rate, because the pressure of the post-stent balloon on the artery sends confusing signals to the brain. The receptors around the carotid artery falsely sense that blood pressure is high, so they send signals to the brain, which in turn sends signals to the heart to slow down and to the peripheral small arteries to dilate. This can stop the heart or cause dangerous hypotension.
“Every time we use the balloon, there can be a major drop in heart rate, so we have to use it judiciously,” said Malas. “It’s just not needed after the stent is in place.”
Other Johns Hopkins researchers involved in the study include Umair Qazi, M.D., M.P.H.; Tammam Obeid, M.B.B.S.; Ngozi Enwerem, M.B.B.S., M.P.H.; Eric Schneider, Ph.D.; Jessica White; Julie Freischlag, M.D.; and Bruce Perler, M.D.
For more information: www.hopkinsmedicine.org, www.jvascsurg.org