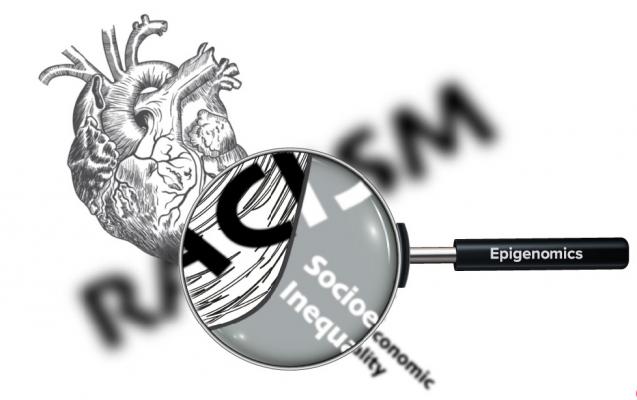 April 26, 2021 – Cardiovascular diseases are the leading cause of death in the United States. Heart failure disproportionately affects African Americans who are 30 percent more likely to die from heart disease than non-Hispanic Caucasian Americans. Despite this, relatively little is known as to why these differences in outcomes exist and what mechanisms might be targeted for individualized therapies.

Researchers at the University of Alabama at Birmingham in the Department of Pathology have now identified an association between molecular programming of gene expression through epigenetics and socioeconomic disparities. The research team, led by Adam R. Wende, Ph.D., associate professor of molecular and cellular pathology, has focused work from his laboratory specifically on DNA methylation. These modifications that occur across the genome alter mRNA transcriptional regulation. Specifically, DNA methylation at the promoter regions of genes is inversely related to their expression. Epigenetic modifications can be inherited, but they also change in response to environmental influences such as diet, exercise, pollution and stress.

The Wende lab-led study, now published in American Journal of Physiology – Heart and Circulatory Physiology, has been highlighted with both a cover and editorial providing additional insight.[1]

Previously, Wende’s group assisted in a study that identified links between DNA methylation in all cause heart failure associated with the ability to use different metabolic fuels to maintain contractility, namely a decrease in oxidative metabolism.[2] An additional study from the group found molecular mechanisms specific to ischemic heart failure, which identified a key epigenetic regulator (i.e. EZH2) as likely having an active role in gene expression regulation involved in both metabolic and structural remodeling.[3]

In the new study highlighted here, the research group and lead investigator, former Medical Scientist Training Program (MSTP) student Mark E. Pepin, M.D., Ph.D., followed up on an observation in the prior ischemia study which pointed to the fact that the greatest differences in DNA methylation in their patient population were between race. The group then received funding from the NIH-funded Center for Healthy African American Men through Partnerships (CHAAMPS) to expand this research.

Cardiac Biopsy Samples Taken From LVAD Cores for This Study

The result was identification of distinct signatures in genome-wide methylation which were then linked to different gene expression pathways. These were distinctly different between the African American and non-Hispanic Caucasian American patients, with inflammatory pathways showing marks that would suggest easier activation in African Americans. Additional analysis by the students and co-authors in Wende’s laboratory with the assistance of another laboratory at UAB in the Department of Epidemiology run by Bertha A. Hidalgo, Ph.D., further showed that these differences in epigenetics were associated with regional poverty and patient survival.

Although preliminary in nature, this study highlights the need for more research in this area as well as follow up studies to determine if any of these molecular marks could represent therapeutic targets for the patients most robustly affected by heart failure.

5 Technologies to Help Overcome Healthcare Disparities in the Next Decade

VIDEO: How Smartphones May Revolutionize Healthcare in the Developing World —Interview with Jacques Kpodonu, M.D.

VIDEO: New PLATINUM Diversity Data Shows Early DAPT Cessation OK in Minorities With New Generation Stent — Interview with Roxana Mehran, M.D., where she explains how trials can be designed to better include minorities.

VIDEO: Using an iPhone to Perform a Cardiac Ultrasound Exam