Spectranetics Asks FDA to Treat In-Stent Restenosis in the Legs 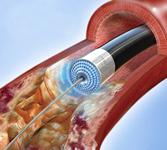 October 1, 2009 – Spectranetics Corp. yesterday said it filed a 510(k) application with the U.S. Food and Drug Administration seeking clearance for the treatment of in-stent restenosis (ISR) in the legs with its commercially available peripheral atherectomy laser products.

ISR is caused by the regrowth of tissue within the stent, known as neointimal hyperplasia, which can lead to blockages in the affected leg artery. The 510(k) application makes reference to the results of bench testing associated with the interaction of laser and nitinol stents. This testing shows that stents subjected to extensive fatigue testing following laser interaction had no fatigue-related failures. The submission also includes reference to clinical data supporting the safety and efficacy of excimer laser treatment in coronary artery ISR and an analysis of interim data from the peripheral artery ISR study, PATENT, which is ongoing in Germany. Although the data from the PATENT trial is preliminary, no evidence of stent damage has been observed during the procedure or during subsequent follow-up evaluations, the company said.

Spectranetics manufactures and markets the only Excimer Laser System approved in the United States, Canada, Europe and Japan for use in minimally invasive interventional procedures within the cardiovascular system. More than 800 Spectranetics laser systems are used in hospitals worldwide.
The company’s vascular intervention products include a range of peripheral and cardiac laser catheters for ablation of occluded arteries above and below the knee and within coronary arteries. The company also markets aspiration catheters for the removal of thrombus and support catheters to facilitate crossing of coronary and peripheral arterial blockages.