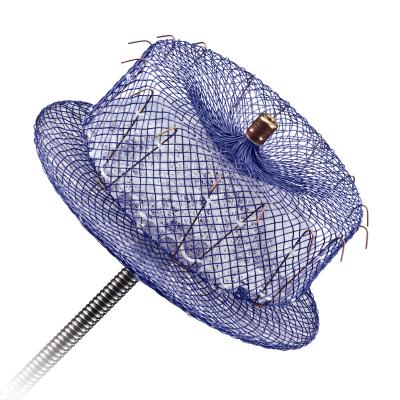 In most people, the LAA — a small appendage connected to the left atrium — does not increase the risk of adverse health effects, but in some patients with atrial fibrillation, the LAA does not contract effectively and it can become a source of blood clots. These clots can then be released into the heart and enter the bloodstream, where they can travel to the brain and cause a stroke. Currently, patients with AF at risk of stroke are often prescribed blood-thinning medication, but this treatment approach comes with a lifetime of medical management and the risk of major bleeding. By closing the LAA with the Amplatzer Amulet occluder, physicians can “seal off” the LAA and potentially reduce the risk of stroke.

The device works by blocking the LAA at its opening, which minimizes the opportunity for blood clots to form in the LAA and migrate into the bloodstream. The Amplatzer Amulet occluder, the second-generation St. Jude Medical LAA occlusion device, is built with a longer lobe and waist than the previous version and designed to allow for easier and more stable placement, which could result in shorter procedure times for patients. The device is also offered in eight sizes to accommodate varying anatomies.

“There’s a real need within the United States medical community for a left atrial appendage occluder that addresses a wider range of complex patient anatomies,” said Dhanunjaya Lakkireddy, M.D., professor of medicine and the director of the Center for Excellence in Atrial Fibrillation and Complex Arrhythmias at the University of Kansas. “The Amulet device has been used successfully in Europe, and I see this IDE trial as the right step toward providing patients with atrial fibrillation the optimal level of care to further reduce the risk of stroke.”

The AMPLATZER Amulet IDE trial is a randomized trial, which will enroll patients at up to 100 sites in the United States and an additional 50 sites internationally. Patients enrolled in the AMPLATZER Amulet IDE trial will be randomly assigned to receive either the St. Jude Medical Amulet device or a U.S. Food and Drug Administration (FDA)-approved LAA closure device in the control arm of the study. Data collected across all trial sites will be used to support FDA approval of the Amplatzer Amulet Occluder.