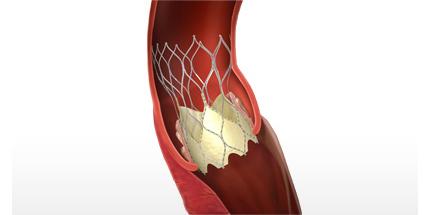 October 31, 2013 — St. Jude Medical Inc. announced positive results for the 23 and 25mm Portico Transcatheter Aortic Heart Valves in the Portico Transfemoral CE mark trial (Portico TF CE Trial). Patients enrolled in the study experienced a significant improvement in valve function at 30 days.
The preliminary findings indicate exceptional hemodynamic performance and improvement in the severity of heart failure symptoms as measured by the New York Heart Association (NYHA) functional classification system. The data was presented at the 25th Annual Transcatheter Cardiovascular Therapeutics scientific symposium (TCT 2013).
Dr. Ganesh Manoharan, Royal Victoria Hospital, Belfast, United Kingdom and lead principal investigator, Portico TF CE Trial, presented preliminary data on the Portico 23 and 25mm valves from 83 patients diagnosed with severe aortic stenosis, a narrowing of the aortic valve that obstructs blood flow from the heart. These patients are candidates for a transcatheter aortic valve replacement (TAVR) procedure, as many are considered high-risk for conventional openheart valve replacement surgery.
Key findings at 30 days:
Paravalvular (PV) leak was reported as follows:
Additional study results reinforce safety and efficacy of the Portico valves beyond 30 days in the subset of patients that have completed longer-term follow up.
“The data presented today demonstrates the benefits of the Portico Transcatheter Aortic Heart Valve in treating sick and critically ill patients with symptomatic aortic stenosis, who simply cannot withstand the rigors of a surgical heart valve replacement procedure,” said Manoharan. “The Portico valve’s self-expanding stent design and ability to be repositioned prior to deployment helps ensure precise valve placement, potentially improving patient outcomes and reducing the likelihood of complications such as a post-procedural pacemaker.”
The non-randomized, multi-center Portico TF CE Trial was initiated to evaluate the Portico 23 mm transcatheter heart valve, which received CE mark in November 2012 and was later expanded to include the Portico 25mm valve. Clinical results for the 25 mm Portico valve are currently under regulatory review to support European CE mark approval.
The Portico valve is the first transcatheter aortic heart valve that can be completely resheathed, repositioned at the implant site or retrieved before being released from the delivery system. During transfemoral delivery, the Portico valve is implanted through a small incision in the femoral artery. The procedure uses a catheter to deliver and position the valve in the heart while it continues to beat. This avoids placing the patient on cardiopulmonary bypass, where a machine takes over heart and lung function during surgery.
The Portico Transcatheter Aortic Heart Valve are not approved for use in the United States.
For more information: www.sjmportico.com