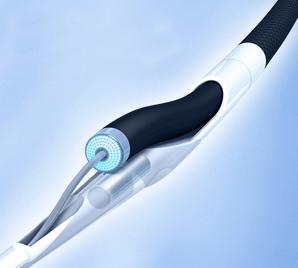 January 13, 2010 – A study evaluating the effectiveness of the Clir-Path laser atherectomy system met its primary endpoint by reducing the diameter of stenosis. Results from the CELLO (CLiRpath Excimer Laser System to Enlarge Lumen Openings) study were published in the December issue of the Journal of Endovascular Therapy.

CELLO evaluated the effectiveness of the FDA-cleared excimer laser ablation system with the Turbo-Booster for patients with peripheral artery disease (PAD).

On average the percent diameter stenosis was reduced from 77.3 percent to 42.5 percent immediately post Turbo-Booster use. This exceeded the goal of a 20 percent difference. Additionally, the Turbo-Booster had a low number of repeat vascular interventions, while safely improving a range of clinical and functional status assessments, researchers said

The CELLO study is a prospective, 17-center study that enrolled 65 patients with claudification, or walking impairments caused by PAD. Direct laser ablation was performed on above-the-knee arteries (in the superficial femoral and popliteal arteries) that were at least 70 percent blocked. It is common for these patients to require frequent revascularization of the target artery blockage. However, the CELLO study demonstrated 76.7 percent of patients did not require revascularization procedures one year post-treatment. Additionally, treatment demonstrated a strong safety profile, with no major adverse events through the six-month follow-up period.

Excimer laser ablation procedures are typically prescribed in combination with conventional therapies, such as balloon angioplasty and stents. While adjunctive therapies remain an important part of the PAD treatment toolkit, the CELLO trial demonstrates that the Turbo-Booster may reduce the need for stent use above the knee. For instance, only 23 percent of the study population required them. A significant proportion of the nonstent subpopulation, 74 percent, did not need revascularization within one year.