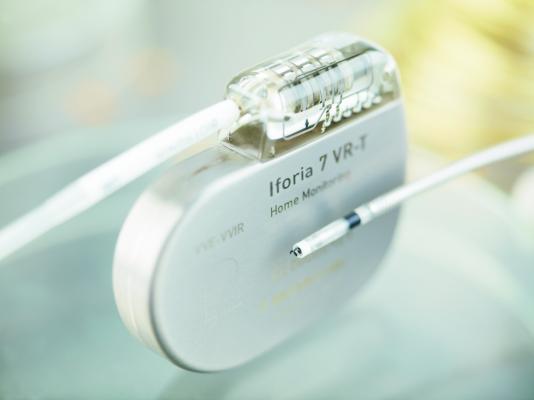 January 17, 2017 — Of patients over age 65 who received an implantable cardioverter-defibrillator (ICD) after surviving sudden cardiac arrest or a near-fatal arrhythmia, almost 80 percent survived two years, according to a new study in the Journal of the American College of Cardiology. This is a higher rate than found in past trials performed to demonstrate the efficacy of the devices in this situation.

Patients who survived sudden cardiac arrest or had a near-fatal fast heart rhythm, called an arrhythmia, are sometimes treated with an ICD to prevent future cardiac arrest. An ICD is placed under the skin and connected to the heart with wires, which detects when the heartbeat is irregular and can return the heart rhythm to normal with an electrical shock—also known as defibrillation.

“In this population, there is a very high risk for these cardiac events to happen again,” said the study’s lead author, Frederick Masoudi, M.D., MSPH, professor of medicine at the University of Colorado Anschutz Medical Campus and the chief science officer of the American College of Cardiology’s National Cardiovascular Data Registry. “I was surprised to see the survival rates in our study were as high as they were.”

Masoudi said the findings suggest that physicians are doing a good job of selecting elderly patients for the implantable defibrillators.

Past randomized clinical trials of ICDs were relatively small, were conducted several decades ago and did not include many older patients. ICD technology and treatment for underlying heart disease have since improved, Masoudi said. In an analysis of these clinical trials, the risk of death for patients at least 75 years of age was approximately 35 percent among those receiving an ICD, compared with 22 percent in the current study, in which 75 percent of the population was at least 75 years old.

“It’s important to study older patients, because they often have other co-existing medical conditions, which may have an impact on their outcomes,” Masoudi said.

The researchers noted that the high hospitalization and skilled nursing facility admission rates, particularly among the oldest patients, indicate there are substantial care needs after an ICD is implanted.

“This gives us a good picture of the healthcare needs of this population after their procedure,” Masoudi said.

Limitations include that the study was not designed to evaluate the effectiveness of ICDs and did not compare the patients receiving the devices with a control group who did not receive them.

In an editorial accompanying the study, Sumeet S. Chugh, M.D., associate director of the Cedars-Sinai Heart Institute, wrote that the findings from the new study would suggest that although patients over age 75 implanted with ICDs after a sudden cardiac arrest or near-fatal ventricular arrhythmia “may have reasonable overall survival, they also have significantly high rates of admission to hospitals and skilled nursing facilities, with no clear evidence of mortality benefit from the device.”

He said that until more research is done about the devices in elderly patients, doctors should consider non-heart-related co-occurring medical conditions and frailty along with age in their decision-making process about ICDs. They should provide the patient with a clear understanding of the rationale and limitations of the ICD, encourage advance directives and bring up the possibility of deactivating the ICD if the patient is nearing end of life.