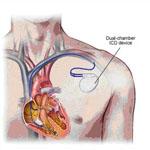 "There are a number of factors that may explain why women experienced a greater benefit than men," said Arthur Moss, M.D., professor of medicine at the University of Rochester Medical Center and principal investigator of the MADIT-CRT trial. "CRT-D therapy is designed to improve the heart's overall pumping ability and women are more likely than men to have non-ischemic heart disease, which typically affects the entire heart rather than a single region and can lead to reduced pumping strength, abnormal heart rhythms and disturbances in the heart's electrical system. Men are more likely to have ischemic heart disease, also known as coronary artery disease, which often leads to a more localized impact on the heart."

MADIT-CRT is the world's largest randomized CRT-D study of New York Heart Association (NYHA) Class I and II patients[1], with more than 1,800 patients enrolled at 110 centers worldwide. Results of the MADIT-CRT trial were published in the October 2009 issue of the New England Journal of Medicine. Boston Scientific currently has an application under review with the U.S. Food and Drug Administration for the expansion of its CRT-D indication to include high-risk [2] NYHA Class I and II patients with left bundle branch block.

1. The NYHA clinical classifications of heart failure rank patients as Class I-II-III-IV, according to the degree of symptoms or functional limits, from asymptomatic to bed-ridden. MADIT-CRT patients are asymptomatic or mildly symptomatic, NYHA Class I (ischemic) and Class II (ischemic and nonischemic).