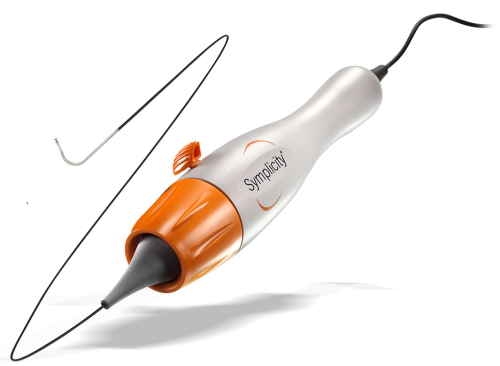 This pooled analysis included change in blood pressure at six months for all patients randomized to receive renal denervation with Symplicity at baseline (n=49), as well as patients in the control group (n=35) who met entry criteria and crossed over to the treatment group following assessment of the initial six-month primary endpoint.

Renal denervation therapy is a minimally invasive, catheter-based procedure that modulates the output of nerves that lie within the renal artery wall and lead into and out of the kidneys. These nerves are part of the sympathetic nervous system, which affects the major organs that are responsible for regulating blood pressure: the brain, the heart, the kidneys and the blood vessels.

The Symplicity system’s catheter and proprietary generator and algorithms were carefully and specifically developed through years of
clinical experience to enhance the safety and effectiveness of the renal denervation procedure. The Symplicity renal denervation system has been successfully used for nearly five years to treat more than 4,000 patients with treatment-resistant hypertension worldwide.

“New treatment guidance issued by the European Society of Hypertension on the use of renal denervation to treat resistant hypertension supports the use of technology that has demonstrated enduring safety and effectiveness safety in clinical studies,” said Sean Salmon, senior vice president and president, Coronary & Renal Denervation, Medtronic. “We believe our Symplicity technology specifically designed for this procedure, coupled with encouraging results from the Symplicity clinical trials with three years of follow-up, fall within these renal denervation treatment guidelines.”

The Symplicity HTN-2 triali is an international, multi-center, prospective, randomized, controlled study of the safety and effectiveness of renal denervation in patients with treatment-resistant hypertension. One hundred-six (106) patients were enrolled from 24 investigational sites. At baseline, the randomized treatment and control patients had similar high blood pressures: 178/97 mm Hg and 178/98 mm Hg, respectively, despite both receiving an average daily regimen of five antihypertensive medications. Patients in the control arm of the study were offered renal denervation following assessment of the trial’s primary endpoint at six months following randomization. Pre-randomization, all patients in the study had an office-based systolic blood pressure ?160 mm Hg despite adherence to at least three antihypertensive medications given at optimal dosage. Mean change in systolic and diastolic blood pressure was -28/-10 mg Hg (n=84) from baseline (p<0.001) to six months post-treatment. Renal function measures were unchanged (eGFR: 82.1±20.2 vs. 80.5±18.9mL/ min/1.73m2; p=NS). There was one right artery dissection in a crossover patient, which occurred while injecting contrast during angiography. No other serious procedure-related adverse events occurred.

Treatment-resistant hypertension, defined as persistently high blood pressure despite three or more anti-hypertensive medications of different types including a diuretic, puts approximately 120 million people worldwide at risk of premature death from kidney disease and cardiovascular events such as stroke, heart attack and heart failure. Research suggests that nearly one third of treated hypertensive individuals are considered resistant to treatment.ii Additionally, these patients have a three-fold increase in risk of cardiovascular events compared to individuals with controlled high blood pressure.iii

About the Symplicity Renal Denervation System

The Symplicity renal denervation system consists of a flexible catheter and proprietary generator. In an endovascular procedure, similar to
an angioplasty, the physician inserts the small, flexible Symplicity catheter into the femoral artery in the upper thigh and threads it into the renal artery. Once the catheter tip is in place within the renal artery, the Symplicity generator is activated to deliver a controlled, low-power radio-frequency (RF) energy routine according to a proprietary algorithm, or pattern, aiming to deactivate the surrounding renal nerves. This, in turn, reduces hyper-activation of the sympathetic nervous system, which is an established contributor to chronic hypertension. The procedure does not involve a permanent implant.