TAVR Anticoagulation With Apixaban Not Superior to Standard Care 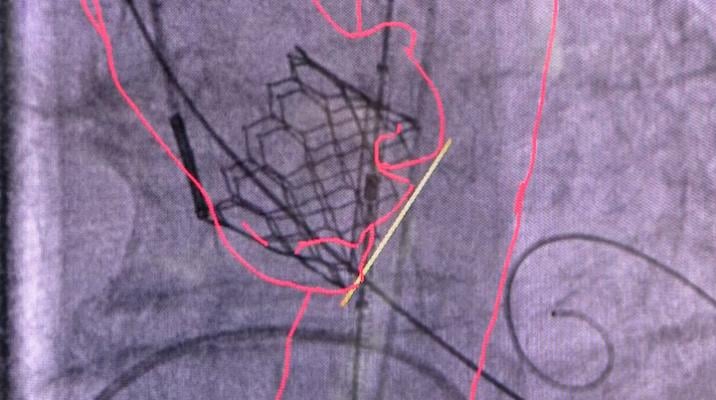 An Edward Lifesciences Sapien TAVR valve during an implant procedure on angiography. There are still questions on how to best anticoagulate TAVR patients and the ATLANTIS study found Eliquis is not a good solution.

May 15, 2021 — The anticoagulant apixaban (Eliquis) was not superior to standard of care following transcatheter aortic valve replacement (TAVR), according to findings from a new trial called ATLANTIS presented at the American College of Cardiology (ACC) 2021 virtual scientific session. Researchers found that while apixaban reduced the formation of thrombosis around the implanted valve with no increased bleeding risk, a subset of patients taking apixaban who did not have an indication for anticoagulation apart from the TAVR procedure showed a tendency toward a higher rate of non-cardiovascular death, a finding researchers said deserves further exploration.

TAVR is a minimally invasive procedure to replace the aortic heart valve through a transcatheter delivery system and eliminates the need for open heart surgery. The procedure carries a risk of adverse events related to bleeding and blood clots, and previous studies have offered conflicting findings regarding the best strategy for preventing these complications. Researchers have also struggled to determine the benefits and risks of antiplatelet or anticoagulation medications in patients who require them for managing heart conditions, like atrial fibrillation (AFib), that are not related to the TAVR procedure compared with patients who would not otherwise need anticoagulants.

Apixaban is a non-vitamin K antagonist blood thinner that has demonstrated better net clinical benefit than vitamin K antagonists (VKA) like warfarin and antiplatelet drugs in some patients with AFib. The ATLANTIS trial, conducted by the Allies in Cardiovascular Trials Initiatives and Organized Networks (ACTION) Group, tested whether apixaban was superior to standard of care antithrombotic treatment, comprising either VKA or aspirin, after successful TAVR.

“Our results do not suggest we can routinely use apixaban as the default antithrombotic treatment after successful TAVR,” said Jean-Philippe Collet, M.D., a professor of medicine and interventional cardiologist at Groupe Hospitalier Pitié-Salpêtrière in Paris, France, and the study’s lead author. “Although the safety of apixaban is the same as standard care and it better prevents valve thrombosis, we observed an unexplained signal on non-cardiovascular mortality among patients who do not need oral anticoagulation. In patients with an indication for oral anticoagulation, apixaban compares favorably with VKA on all endpoints and remains easier to use.”

For the trial, researchers enrolled 1,510 patients at 50 centers in four countries who underwent a successful TAVR procedure between 2016-2019. About one-third of the patients required anticoagulation therapy for reasons other than the TAVR procedure, mainly for AFib. Half of this group and half of the remaining patients were randomly assigned to receive apixaban. The remaining patients received standard care, which consisted of the VKA warfarin in patients requiring anticoagulation and an antiplatelet medication alone (typically aspirin) in those not requiring anticoagulation.

At one year, the study found no significant difference in the primary endpoint, a composite of all cause death, stroke, heart attack, valve thrombosis, pulmonary or systemic embolism, deep vein thrombosis or major bleeding, which occurred in 18.4% of those taking apixaban and 20.1% assigned to standard care. According to statistical thresholds specified for the trial, these results show that apixaban was not superior to standard care in terms of the primary endpoint. In addition, there was no interaction according to the need for oral anticoagulation; however, there were numerically higher numbers of secondary endpoints including death, stroke, heart attack or systemic embolism in the apixaban group compared to the standard care group.

“This difference, although not significant, was unexpected and driven only by the cohort of patients who did not have an indication for oral anticoagulation and only by the rate of non-cardiovascular death,” Collet said. “Among the subset of patients who are in need of oral anticoagulation, the results suggest that apixaban may be the default treatment given its ease of use and track record in atrial fibrillation.”

The signal on non-cardiovascular mortality reported in the subset of patients taking apixaban who did not require anticoagulation is consistent with findings from a previous trial, GALILEO, although the ATLANTIS trial did not find an excess of bleeds as was found in GALILEO, nor an excess of ischemic events (stroke or heart attack). Collet said that the absolute number of non-cardiovascular deaths was low in the cohort without indication for anticoagulation, adding that these deaths were mainly due to sepsis or acute renal failure and were rarely preceded by minor bleeding events.

“We cannot exclude a play of chance,” Collet said.

The study was sponsored by the Assistance Publique des Hôpitaux de Paris and funded by the ACTION fund and the Bristol Myers Squibb/Pfizer Alliance.