At one year, TAVR linked to better outcomes with fewer deaths, strokes or hospital visits 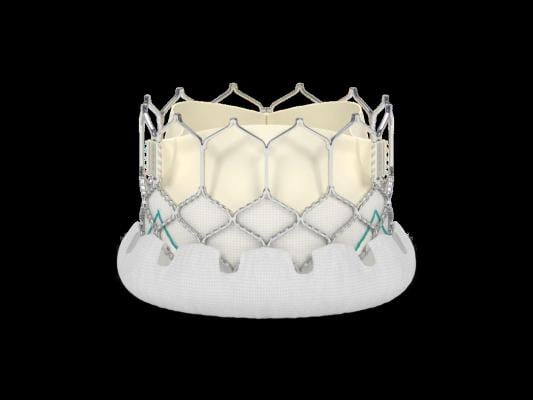 March 22, 2019 — Among patients with severe symptomatic aortic stenosis at low surgical risk, transcatheter aortic valve replacement (TAVR) using the Sapien 3 valve compared with conventional surgery significantly reduced the primary endpoint of death, stroke and re-hospitalizations by 46 percent at one year. The data, from the latest PARTNER trial, were presented at the American College of Cardiology’s 68th Annual Scientific Session, March 16-18 in New Orleans. In addition, the rates of death from any cause, stroke and repeat hospitalizations independently favored TAVR at 30 days and at one year, researchers said.

Unlike open surgery, TAVR involves threading a replacement valve through a catheter in the groin. TAVR is currently approved by the U.S. Food and Drug Administration (FDA) for the treatment of severe aortic valve stenosis in patients at intermediate and high risk for complications associated with surgery.

PARTNER 3 is the fifth randomized trial of the PARTNER series of studies, which collectively includes over 9,000 patients with severe aortic stenosis, a problem that occurs when the valve in the heart's main artery does not open fully, forcing the heart to work harder to pump blood. The earliest trials evaluated TAVR in the “sickest” patients — many of whom cannot be treated with surgery — with subsequent research moving down the spectrum of risk. This study was performed in patients at low surgical risk, which comprise the majority of patients who are candidates for surgery to have their aortic valve replaced.

“This is a landmark study because it involves 80 percent of the people who are currently being treated with surgery for aortic stenosis. Our hope was that TAVR would be non-inferior or comparable to surgery, and we were surprised to find an almost 50 percent reduction in the primary endpoint, from 15.1 percent in the surgical group to 8.5 percent with TAVR,” said Martin B. Leon, M.D., director of the Center for Interventional Vascular Therapy at New York-Presbyterian/Columbia University Irving Medical Center, professor of medicine at Columbia University Vagelos College of Physicians and Surgeons and lead author of the study. “This is beyond anything we could have expected, mostly because surgery is so good in treating aortic stenosis in these low risk patients.”

PARTNER 3 included 1,000 patients with severe aortic stenosis at 71 centers in the U.S. and several other countries, with over 95 percent of patients enrolled at U.S. sites. Participants were carefully screened to be low risk for either TAVR or surgery, and were randomly assigned to receive the Sapien 3 TAVR valve or surgical valve replacement. Compared with the earlier PARTNER trials with intermediate- and high-risk surgical patients, this low-risk group was younger (73 years on average), had fewer comorbid conditions and had fewer symptoms. There were also more men than women enrolled (67.5 percent vs. 32.5 percent, respectively).

The primary endpoint was the combined rate of all-cause death, any stroke and re-hospitalizations (those related to the valve, the procedure or heart failure) at one year after the procedure.

“Taken by themselves, each component of the primary endpoint also favored TAVR, which is confirmatory evidence of the outcome,” Leon said.

A total of 16 patients died during follow-up. Of these, 11 were in the surgery group and five were in the TAVR group, so the one-year mortality rate was 1 percent for TAVR and 2.5 percent for surgery. Twenty patients suffered a stroke, 14 of which occurred in the surgery group (3.1 percent) and six in TAVR (1.2 percent). Patients in the surgical group were also more likely to go back to the hospital compared with those in the TAVR group (11 percent and 7.3 percent, respectively).

Several secondary endpoints were also analyzed. The length of hospital stay was reduced from seven to three days with TAVR. Patients in the TAVR group also had more rapid 30-day functional recovery based on six-minute walk tests and other self-reported quality of life measures.

“Surgery eventually catches up to TAVR in terms of functional recovery and quality of life, but it takes several months,” Leon said. “TAVR is a less invasive procedure, so we expect an earlier return to normal daily activities compared with surgery. There has also been an evolution of TAVR technology, increased operator experience and enhanced procedural techniques, all of which combine to lower complications after TAVR especially in the lowest risk patients.”

Post-operative or new onset atrial fibrillation was found in almost 40 percent of the surgical patients compared with only 5 percent of those receiving TAVR. Major vascular complications were similar between the groups, as was the need for new permanent pacemakers (4 percent after surgery vs 6.5 percent after TAVR). However, Leon said that the incidence of new left bundle block was higher with TAVR, which may be a predictor of needing a new pacemaker in future. Moderate or severe paravalvular leaks, leaks around the valve, were similar in the two groups.

“The results of this trial in low-risk patients indicates that the choice of TAVR versus surgery for severe aortic stenosis should be independent of surgical risk profile assessments,” Leon said. “The combined rate of death and disabling stroke at one year was only 1 percent with TAVR, which was an unexpectedly favorable outcome. Based on these findings, the choice of TAVR versus surgery should be a shared decision-making process that respects patient preferences and considers some of the knowledge gaps, especially in treating young patients.”

There are two major limitations to the PARTNER 3 trial. First, the data are limited to one-year follow-up, and longer-term follow-up is needed to be certain that the transcatheter valves are as durable as surgical valves. The patients in this trial will be followed for 10 years. Second, certain patients were excluded in this study, such as patients with bicuspid aortic valve disease and those with poor anatomy such that the valve could not be threaded through the femoral artery in the groin.

The study was funded by Edwards Lifesciences.