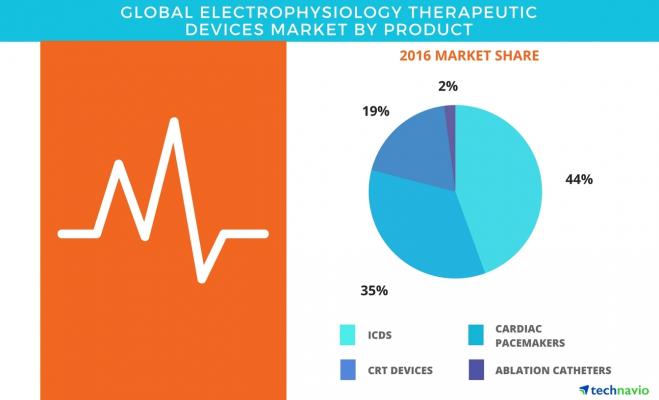 September 11, 2017 — According to the latest market study released by Technavio, the global electrophysiology therapeutic devices market is expected to grow at a compound annual growth rate (CAGR) of more than 9 percent between 2017 and 2021.

This research report titled ‘Global Electrophysiology Therapeutic Devices Market 2017-2021’ provides an in-depth analysis of the market in terms of revenue and emerging market trends. This report also includes an up-to-date analysis, and forecasts for various market segments and all geographical regions.

According to Srinivas Sashidhar, a lead analyst at Technavio for orthopedics and medical devices research, “The global ICD market is expected to rise during the forecast period due to the growing incidence rate of CVD [cardiovascular disease]. The market is also witnessing an increase in the demand for ICDs in emerging regions like APAC [Asia-Pacific] and the Middle-East. Several healthcare awareness programs have been organized across the world for increasing the adoption rate of ICDs. Subcutaneous ICDs are one of the widely used ICDs, which are popular due to fewer complications during implantation.”

Several investments in research and development (R&D) have been made to create technologically advanced pacemakers that are more compact and cause minimum discomfort. Such advancements have encouraged the use of cardiac pacemakers in cardiac rhythm management. The demand for implantable cardiac pacemakers is expected to witness rapid growth during the forecast period.

CRT devices are one of the main revenue contributors to the global EP therapeutic market. The key vendors of the global CRT devices market are Medtronic, Boston Scientific, St. Jude Medical and GE Healthcare. According to the report, Claria MRI CRT-D by Medtronic is one of the most magnetic resonance imaging (MRI)-friendly CRT devices used for cardiac rhythm management.

“The adoption rate of CRT devices is likely to rise due to the complications associated with the other implantable devices such as ICDs and cardiac pacemakers. The procedure cost of CRT devices is comparatively low. The use of MRI-friendly devices helps in better management of cardiac diseases,” said Srinivas.

The rise in atrial fibrillation is expected to propel the market growth during the forecast period. The leading players in the market include Medtronic, Boston Scientific and St. Jude Medical. The launch of new products and expected new regulatory approvals is likely to boost the global electrophysiology therapeutic devices market, according to Technavio.