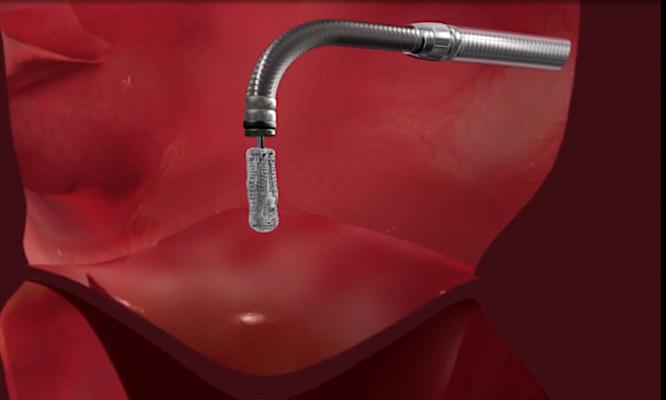 October 15, 2020 – The MITHRAS randomized clinical trial found that interventional closure of an iatrogenic atrial septal defect (iASD) driven by transcatheter mitral valve repair (TMVR) was not superior to conservative medical treatment with regard to the primary endpoint of change in six minute walking distance.

TMVR requires transseptal access to the left atrium, which creates an iASD that remains with detectable shunting across the intra-atrial septum. While the induction of an iASD has been linked to improved hemodynamics in specific heart failure populations and is currently being investigated in large-scale clinical trials in patients with heart failure, the presence of a persistent iASD is also associated with increased long-term mortality and morbidity following TMVR.

The MITHRAS trial investigated whether the closure of a TMVR induced iASD is superior to medical therapy alone. In this prospective, randomized, single-center trial, patients with a persistent iASD one month following TMVR and relevant left-to-right shunting (Qp:Qs ≥1.3) were randomly assigned in a 1:1 ratio to standard medical therapy alone or closure of the iASD using the Occlutech ASD occluder. The primary endpoint was change in 6-minute walk distance five months after iASD occlusion. Secondary endpoints included all-cause mortality and rate of heart failure hospitalization at one year.

“Interventional closure of iASD one-month post transcatheter mitral valve repair was not superior to conservative treatment with regard to the primary endpoint six-minute walking distance,” said Philipp Lurz, M.D., Ph.D., Deputy Head of the Cardiology Department at Heart Center Leipzig at the University of Leipzig, Germany. “The results are corroborated by no difference in secondary endpoints such as heart failure symptoms or hospitalization and survival. The presence of an iASD is associated with a higher rate of HF hospitalization irrespective of its management when compared to patients without relevant iASD following TMVR. The presence of an iASD following transcatheter mitral valve interventions might be a prognostically relevant surrogate, but not necessarily causative for inferior outcomes.”

Between January 2016 and October 2019, a total of 80 patients were enrolled. All patients underwent TMVR with 95% using the MitraClip device one month prior to enrollment and were diagnosed with an iASD with relevant left-to-right shunting on transesophageal echocardiography. Overall, 40 patients were randomized into the iASD closure group and 40 patients into the medical therapy only group.

There were no differences observed in change in the primary endpoint of six-minute walking distance or any of the prespecified secondary endpoints at five months between groups.