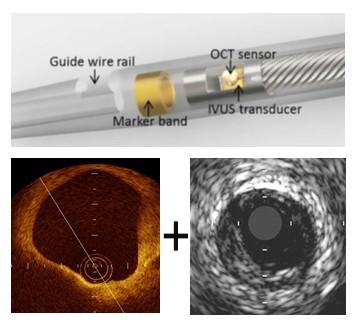 The dual catheter OCT-IVUS imaging device can be inserted into an artery to simultaneously capture an infrared image of the arterial wall (OCT, at left) and an ultrasound image (IVUS, right) that doctors use to determine the potential that a plaque is susceptible to rupture that could cause a heart attack or stroke.

May 12, 2016 — Collaboration between two National Institute of Biomedical Imaging and Bioengineering (NIBIB)-funded labs has revealed a promising new method for identifying atherosclerotic plaques. These encased deposits in arteries restrict blood flow and can lead to heart attack or stroke.

The technique combines two different types of imaging, allowing for an unprecedented combination of depth and detail. The hybrid technology will provide doctors with a better diagnostic tool for identifying particularly problematic plaques.

Heart disease is the leading cause of death worldwide. The majority of deaths from heart disease are caused by the rupture of a plaque lining an artery; identifying vulnerable plaques may help create more targeted and effective treatment. One type of plaque that carries the greatest risk is the thin-cap fibroatheroma (TCFA). TCFAs are susceptible to rupture because they contain a large necrotic core, filled with lipids and dead cells, and the region surrounding the core (the fibrous cap) has thinned.

Existing techniques to visualize plaques include intravascular ultrasound (IVUS) and optical coherence tomography (OCT), but neither gives doctors the full picture. IVUS can image deep into the vessel, revealing the necrotic core size, but lacks the resolution to identify the thin fibrous caps. OCT, on the other hand, gives excellent detail of the caps, but can’t show deeper structures.

The work, reported in the Dec. 18, 2015, issue of Scientific Reports, details a hybrid approach that integrates IVUS and OCT, providing both the imaging depth and resolution necessary to identify TCFAs.

“The combined optical-ultrasonic system is a promising and powerful tool for identifying vulnerable plaques,” said Behrouz Shabestari, Ph.D., director of the NIBIB program in Optical Imaging and Spectroscopy. “The system has the potential to increase detection and diagnostic accuracy of vulnerable plaques and will allow for better treatment options.”

The two centers provided complementary expertise: The UCI team specializes in OCT, while the USC group focuses on IVUS. “The advantage of the center funding is that we have flexibility,” said Kirk Shung, Ph.D., a professor of biomedical engineering at USC and one of the authors of the paper. “We came up with the idea, and because we have the funding, that allowed us to immediately start working together.”

Until now, both technical issues and safety concerns prevented combining the two techniques. Each technology has a different optimal imaging speed; IVUS takes about 30 frames per second, while OCT uses a speed of more than 100 frames per second.

Increasing IVUS’s speed sacrifices image quality, while slowing OCT extends procedure time, increasing the risk of both side effects from the imaging agents used and false diagnosis from catheter spasm. The group’s previous attempt at integrating the two used 20 frames per second but was abandoned because of the long procedure time. Alternatively, doing one procedure after the other would require two separate catheters and cost a lot more.

This time, the breakthrough came as a result of many technical advances, including a customized catheter, improved ultrasound transducer and faster graphical processing unit. The result was a hybrid IVUS-OCT imaging system that could take pictures at a rate of 72 frames per second. Although there was initially a slight decrease in IVUS image quality, it was offset by increased sensitivity of the transducer. The hybrid system can visualize 7 centimeters of artery in 4 seconds.

The new system was first tested in healthy rabbits and rabbits with a build-up of plaque (atherosclerosis), and proved the mechanics of the ultrafast system worked well and that plaques could be clearly characterized from the resulting images. Next the team used the hybrid approach to visualize plaques in human tissue obtained from cadavers. After IVUS-OCT imaging, the tissue was sliced and stained to confirm locations of TCFA plaques. Two doctors independently evaluated images from IVUS alone, OCT alone or the IVUS-OCT images together. While they were unable to identify TCFAs using either IVUS alone or OCT alone, the doctors made accurate classification of these plaques when IVUS and OCT images were evaluated together.

The technique could also be used to image other structures and lesions, such as calcification, noted Shung. Most people who are older than 60 have deposits of calcium mineral in their major arteries, which cause the vessels to be less elastic over time and are a factor in heart disease.

“This work has overcome many of the challenges of doing IVUS and OCT simultaneously,” said Zhongping Chen, Ph.D., a UCI professor of biomedical engineering and senior author of the paper. “When you use a single catheter, you don’t have to worry about matching two images, which enables physicians to look at co-registered ultrasound and OCT images simultaneously in real time. It will make identifying plaques easier and more precise, allowing for better treatment decisions.”

The OCT-IVUS technology has been licensed by OCT Medical Imaging Inc., a company that Chen co-founded, which recently received a Small Business Innovation Research (SBIR) program grant from NHLBI to fast-track the translation of this technology for clinical applications.