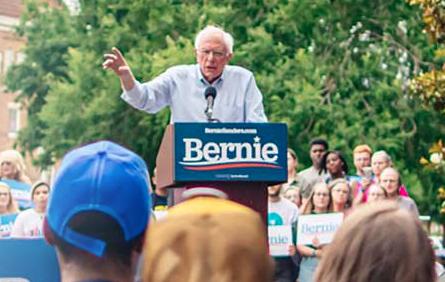 October 2, 2019 — Democratic presidential candidate Sen. Bernie Sanders (D-VT) was hospitalized with chest pain on Oct. 1 and went to the cath lab to have two stents implanted in his heart, according to news reports (see breaking ABC news report).

(This article was updated Oct. 4 with information in a statement Sanders sent to supporters)

The 78-year-old senator reported chest pain after a campaign rally in Las Vegas yesterday and went a hospital where he underwent the emergency procedure.

Sanders has cancelled the rest of his presidential campaign events until further notice.

Based on a letter from one of his doctors in 2016, he had no previous cardiovascular history.

"I am feeling good, and am fortunate to have good healthcare and great doctors and nurses helping me recover," Sanders wrote in a letter to supporters Oct. 3. "None of us know when a medical emergency might affect us. And no one should fear going bankrupt if it occurs. But the truth is, millions of Americans are not as lucky as I am right now. Today in America, there are some 87 million Americans who are uninsured or underinsured. That is unacceptable to me."

Sanders is a big supporter of providing healthcare to all Americans as a right, not a privilege under the current insurance system. A big plank in his campaign platform is the so called "Medicare for all" proposal. It would be similar to socialized medicine programs offered in most European countries.

"It is unacceptable to me that today in America, we end up spending almost twice as much as any other major country on healthcare, while our life expectancy continues to decline and our healthcare outcomes lag behind many other countries," Sander said in his statement. "It is unacceptable to me that we give tax breaks to billionaires and large corporations while people are dying because they can't afford to get to a doctor or buy the medicine they need."

“By clinical guidelines, an artery should be about 70 percent blocked before a stent is placed," said Robert A. Harrington, M.D., FAHA, president of the American Heart Association in a release sent out today about the candidate. "This is a fairly common heart procedure — about 434,000 procedures were done in 2014 in the U.S. Often patients require more than one stent.”

To open an artery narrowed by atherosclerosis plaques, a doctor may perform a percutaneous coronary intervention (PCI) or angioplasty. In this procedure, a balloon-tipped catheter is inserted into an artery and moved to the point of blockage. Then the balloon is inflated. This compresses the plaque and opens the narrowed spot. Stents are then usually placed to help keep the artery from collapsing after the balloon procedure. The stent stays in the artery permanently and holds it open to improve blood flow to the heart muscle and relieves the chest pain.