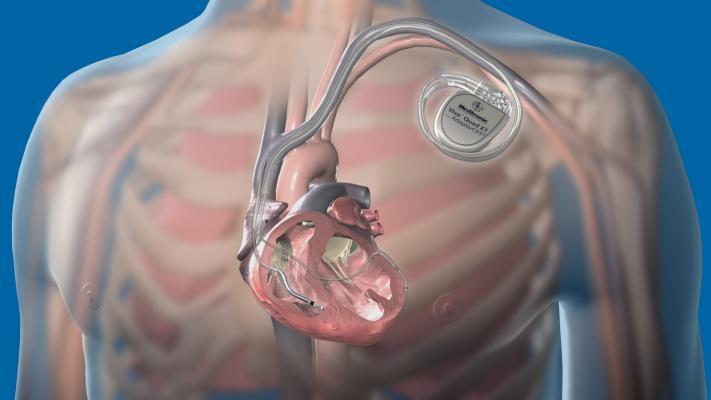 January 4, 2016 — Johns Hopkins has demonstrated in animals that applying a pacemaker’s mild electrical shocks to push the heart in and out of normal synchronized contraction for part of each day may be an effective way to slow down the progression of heart failure.

In the study published online in the Dec. 23 issue of Science Translational Medicine, the researchers say recent experiments in dogs show that the therapy — called Pacemaker Induced Transient Asynchrony, or PITA — reverses cellular damage to the heart’s response to hormones, like adrenaline, and fixes the damage to the motor proteins in the heart muscle that generate force. Essentially, the therapy uses a pacemaker over several hours to alternately “zap” a region of heart muscle with electrical shocks so it beats out of sync, and then reverses this so the heart beats again in synchrony for the rest of the day.

“It’s the process of going back and forth that is important. In a way, we’ve attached a light-switch timer to a pacemaker — like the automatic timers used in homes to turn lights on and off — but here it flips the pacemaker between synchronous and out-of-sync states each day,” said David Kass, M.D., a professor of medicine and biomedical engineering at the Johns Hopkins University School of Medicine. “We’re very excited about prospects for this therapy because if further research confirms its effectiveness and safety, it’s relatively easy to implement. The pacemaker hardware already exists, and with some software upgrades, we may have a treatment that would benefit many, many people.”

According to Kass, congestive heart failure, marked by enlargement and weakness of the heart muscle, affects tens of millions of people worldwide and remains a leading cause of hospitalization and death. In approximately 25 percent of patients, the disease is worsened by so-called dyssynchronous contraction resulting from delays in electrical activation between the two sides of the heart.

“For heart failure patients who develop dyssynchrony, the heart ends up out of tune, like a car with a broken timing belt,” said Kass. A decade ago, his team pioneered cardiac resynchronization therapy, which uses a pacemaker to deliver electric pulses to both sides of the heart so it’s retuned, or synchronized. Over the years, they discovered that resynchronization therapy also improves the heart’s tissue, including changes in the way that calcium flows through heart muscle cells, the way that receptors on the heart respond to hormones, like adrenaline, and the way that the heart’s force-generating fibers performed.

“We discovered that this wasn’t just tuning the engine — the engine itself wasn’t the same anymore,” said Kass. “At a very basic level, the molecular processes that control heart contraction had improved.”

These observations led Kass and his colleagues to develop PITA and begin their latest animal experiments. They would ultimately be aimed at the 75 percent of heart failure patients who do not have dyssynchrony and so are not eligible for a resynchronizing pacemaker.

In the new experiments with dogs, the researchers first induced heart failure in the animals — 10 received PITA, and 13 served as heart failure controls — by delivering atrial pacing, or small electrical pulses to the right atrium of the heart, 200 times per minute, 24 hours a day for four weeks. After four weeks, the PITA treatment group received six hours of electrical pulses per day to the right ventricle at the same 200-times-per-minute rate and then atrial pacing for the remaining 18 hours of the day. The control group received an additional four weeks of continuous atrial pacing. An additional eight dogs received no atrial pacing at all and were kept as controls.

The investigators found that, relative to the heart failure control group, four weeks of PITA treatment reduced progressive enlargement of the heart, boosted its response to adrenaline stimulation by 38 percent, reversed dysfunction and structural damage of motor proteins that occurred in about 40 percent of the heart failure group, and increased the force-generating ability of the muscle also by about 40 percent. There were no apparent adverse side effects from PITA.

“We liken PITA to immunization, where you’re given just a bit of a bug to help you mount a robust immune response that protects you against a more serious infection. Too much dyssynchrony exposure is also bad for the heart; we knew that, but here we show that a little bit each day can stimulate beneficial effects,” said Kass.

Kass speculates that the ideal patient for PITA would be one with heart failure who has normal synchronous heart contractions and is a candidate for an internal defibrillator; this covers about 75 percent of heart failure patients. A defibrillator is an insurance policy that is only helpful if you have a lethal arrhythmia, but by itself, it does not change heart function or symptoms. Used in conjunction with PITA, though, the defibrillator has the potential to improve symptoms now as well. PITA was not compared to any drug therapies in this animal study, and long-term risks remain to be determined.

The study was funded by grants from the National Heart, Lung, and Blood Institute; Abraham and Virginia Weiss and Michael and Janet Huff Endowments; the National Institute of Arthritis and Musculoskeletal and Skin Diseases (R01-AR034711); the Department of Health and Human Services (HHSN268201000032C); the American Heart Association (14SDG20380148); and the Burroughs Wellcome Fund.

Kass, who has a patent pending for PITA in accordance with Johns Hopkins University policies, said clinical trials with PITA could begin in 2017 in selected patients.