New data show 4 gram dose of icosapent ethyl may be new, cost-effective way to prevent CV complications among patients with elevated triglycerides who have heart disease or diabetes 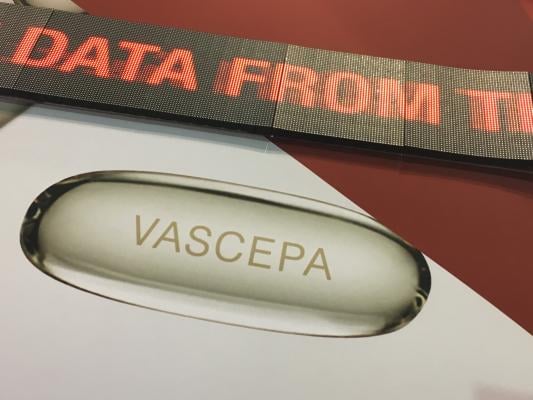 March 29, 2019 — Taking a high dose of icosapent ethyl significantly reduces the occurrence of first, subsequent and total ischemic events, including heart attacks, strokes and related deaths, among people at high cardiovascular risk despite already being on statin therapy. These findings came from research presented at the American College of Cardiology’s (ACC) 68th Annual Scientific Session, March 16-18 in New Orleans.

Compared with placebo, icosapent ethyl — a pure and stable prescription form of the omega-3 fatty acid known as EPA — cut the combined rate of first and subsequent cardiovascular deaths, nonfatal heart attacks or strokes, procedures for coronary artery disease such as stenting, or hospitalizations for unstable angina (the study’s primary endpoint) by 30 percent, demonstrating the drug may be more protective than previously reported. Earlier analyses of the Reduction of Cardiovascular Events with Icosapent Ethyl–Intervention Trial (REDUCE-IT), which were primarily focused on the first occurrence of a major adverse cardiovascular event, found a 25 percent reduction. This latest analysis aimed to determine the extent to which the drug reduced the total burden of (first and subsequent) cardiovascular events.

“In looking at the totality of events — not just the first ones, but subsequent ones too — we see that the drug provides even greater reductions in ischemic events. By looking only at first events, we underestimate the true underlying treatment benefit offered,” said Deepak L. Bhatt, M.D., MPH, executive director of interventional cardiovascular programs at Brigham and Women’s Hospital, professor of medicine at Harvard Medical School and the study’s lead author. “From a patient’s perspective certainly, and from a physician’s point of view, icosapent ethyl’s impact on total events is what matters most.”

Watch the VIDEO: REDUCE-IT Trial Shows New Therapy Option for Patients With Uncontrolled Triglycerides, an interview with Bhatt at AHA 2018.

Bhatt said that patients with high triglycerides who also have atherosclerosis or diabetes are especially vulnerable to repeat cardiovascular complications, so finding ways to prevent subsequent events is important and potentially lifesaving. Over a median follow-up period of approximately five years, there were nearly 3,000 events; 1,606 first events and 1,303 subsequent events, which included 762 second events, 272 third events, and 269 fourth or more events. For patients taking icosapent ethyl, first events were reduced by 25 percent, second events by 32 percent, third events by 31 percent, and fourth or more events were cut nearly in half (48 percent). The drug also prevented 1 in 5 cardiovascular-related deaths, as previously reported.

“With this drug, we are not only preventing that first heart attack but potentially the second stroke and maybe that third fatal event,” Bhatt said. “Prevention of such subsequent cardiovascular events could improve patient outcomes and quality of life and may lower the total cost burden of medical care.”

The primary endpoint occurred in 17.2 percent of patients taking icosapent ethyl versus 22 percent of patients taking the placebo — an absolute risk reduction of 4.8 percent. For every 1,000 patients treated for five years with icosapent ethyl vs. placebo, about 159 events could be prevented, including 12 cardiovascular-related deaths, 42 heart attacks, 14 strokes, 76 coronary revascularizations and 16 hospitalizations for unstable angina.

“That’s a striking impact not only for that individual, but also if we consider the public health implications and potentially cost-effective ways to lower risk, this could be an appealing strategy,” Bhatt said. “We were surprised by how large an effect size there is and how much of an impact the drug is having on these patients over time, especially in the context of patients who are already well treated with background therapy.”

Baseline use of antiplatelet therapy, ACE-inhibitors/ARBs, beta blockers, aspirin and statins were all very high in REDUCE-IT, which Bhatt said provides reassurance that icosapent ethyl is providing separate and incremental benefits. “These are not undertreated patients, but they are really well treated and still remain at high cardiovascular risk,” he said, adding that this drug could potentially benefit tens of millions of patients worldwide.

Researchers also reported consistent cardiovascular benefits across subgroups of patients, including across a range of triglycerides levels, such as those with baseline or achieved triglycerides above or below 150 mg/dL, which is considered the threshold for normal by current guidelines. Bhatt said this suggests there are likely additional cardioprotective effects unique to icosapent ethyl besides triglyceride-lowering, including anti-inflammatory properties, anti-thrombotic mechanisms and cell membrane stabilization. As previously reported, the drug had a good safety profile albeit with an increased incidence of atrial fibrillation and numerically more patients with serious bleeding episodes; however, Bhatt said the overall rates were low. He reported there was no increase in the risk of stroke, the most serious complication of atrial fibrillation, but rather a statistically significant 28 percent reduction with icosapent ethyl versus placebo, as well as significant reductions in heart attacks, cardiac arrest and sudden cardiac death.

Icosapent ethyl (Vascepa) is currently approved by the U.S. Food and Drug Administration (FDA) for people with triglycerides above 500 mg/dL. Bhatt said the study drug is a prescription medicine and that the results do not apply to dietary supplement formulations, which are not approved or strictly regulated by the FDA. The high dose of EPA, which in studies appears to be more cardiovascular protective than DHA, is comparable to what one would get after eating over 20 servings of fish a week but without the related saturated fat and other components of fish, he said.

The study received funding from Amarin Pharma Inc. It was simultaneously published online in the Journal of the American College of Cardiology at the time of presentation.1