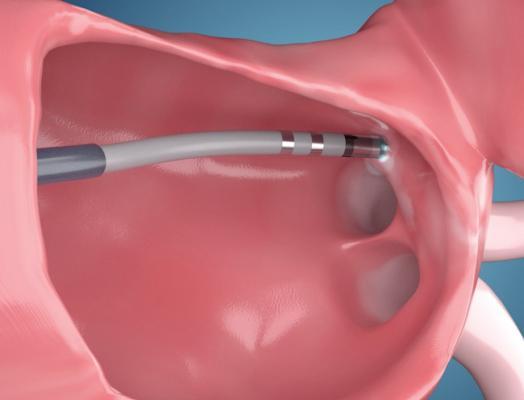 August 9, 2021 – Results from an international clinical trial show a significant reduction in risk of ventricular tachycardia (VT) recurrence, cardiovascular hospitalization, and sudden cardiac death (SCD) death when catheter ablation is used as an early first-line treatment for patients with structural heart disease. Led by study coordinating center, the University of Chicago, The PAUSE-SCD trial is the first VT ablation trial to include patients with nonischemic cardiomyopathy and to be conducted across Asia. Findings of this landmark trial were presented today as late-breaking science during Heart Rhythm 2021, the annual meeting of the Heart Rhythm Society (HRS).

Sudden cardiac death is one of the leading causes of death around the world,[1] occurring when blood flow to the brain is restricted due to a malfunctioning electrical system in the heart and is not treated within minutes. Patients with VT – a heart rhythm disorder that involves a dangerously fast heartbeat – and other structural heart diseases are at an increased risk of SCA.[2] As the study was conducted in Asia, the largest populous continent at risk of SCD, VT patients with nonischemic cardiomyopathy were included due to higher prevalence relative to ischemic cardiomyopathy. Nonischemic cardiomyopathy is a condition with decreased heart muscle function related to causes other than a prior heart attacks or coronary artery blockage.

The international, multi-center, randomized controlled trial was conducted in 11 sites across China, Japan, Korea, and Taiwan in collaboration with University of Chicago Medicine, who served as the study coordinating center. A total of 121 patients with structural heart disease or monomorphic VT indicated for implantable defibrillator (ICD) therapy were enrolled. Patients were randomized 1:1 to either ablation within 90 days of ICD implantation or medical therapy. Patients who refused ICD therapy were followed in a prospective registry after stand-alone ablation treatment. The primary outcome included a triple composite of VT recurrence, cardiovascular hospitalization, and death. The study was conducted over a six-year period with a median patient follow-up of 31 months.

Key findings of the trial reveal catheter ablation as a first-line treatment within 90 days of ICD therapy reduced the relative risk of VT recurrence, cardiovascular hospitalization, and death by 42% across varied etiologies of structural heart disease. Over the median follow-up period, the primary outcome occurred in 45% of patients who underwent ablation and 59% in those managed with conventional medical therapy (hazard ratio 0.58, 95% confidence interval, 0.35-0.96; P=0.036). Ablation was performed a median of two days prior to ICD implantation (IQR 5 days prior-14 days after). There were 8% procedural-related complications in the ablation group.

"This is only one of three clinical trials to provide an in-depth look at catheter ablation as a preventive measure for patients at risk of life-threatening sudden cardiac events," said Roderick Tung, M.D., FHRS, University of Chicago and lead author. "Ablation has historically been viewed as a palliative, last-resort strategy and bringing it upfront as concurrent therapy with ICD implantation is a potentially meaningful paradigm shift. It is also the first to include patients with VT without prior myocardial infarction as well as the first to include more contemporary procedural strategies, such as high-resolution mapping and epicardial approaches. We hope that these results will influence future guidelines that are trending toward earlier use of catheter ablation over medical therapy in the course of patient treatment."

Additionally, study results showed the ablation registry that enrolled patients who did not receive an ICD had higher freedom from recurrent VT compared to medical therapy with no significant differences in mortality. The authors express that this opens the door for scientific questioning as to whether ablation without defibrillator therapy may be acceptable in highly selected patients. Further, they note that defibrillator therapy is not affordable for many around the world, reinforcing the importance of a future studies that could potentially randomize patients with nonischemic cardiomyopathy, a group that has not shown consistent survival advantage with ICD implantation, to stand-alone ablation therapy.