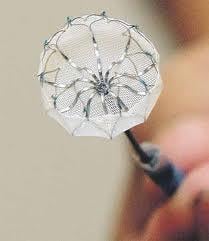 May 14, 2012 — Boston Scientific announced results from the ASA Plavix (ASAP) study, which studied the Watchman Left Atrial Appendage (LAA) Closure device. The data showed a reduction in the risk of ischemic stroke by 75 percent in patients with atrial fibrillation who have a contraindication to oral anticoagulants such as warfarin. Vivek Reddy, M.D., director of cardiac arrhythmia service at Mount Sinai Medical Center in New York and coordinating investigator of the study, presented results during a late-breaking session at the Heart Rhythm Society (HRS) 2012 Scientific Sessions in Boston.

"Findings from the ASAP Study are promising in that closure of the LAA with the Watchman device produced a significant reduction in the expected ischemic stroke rate for this patient population," said Reddy. "These results are very impressive and show potential for an effective device-based solution for higher-risk patients with limited pharmacologic options to reduce their risk of stroke."

Stroke rates in the ASAP study were similar to those observed in the PROTECT AF study, which assessed similar subjects not contraindicated to warfarin. In the multi-center, randomized PROTECT AF trial, the Watchman device proved to be non-inferior to warfarin and demonstrated a 38 percent relative risk reduction for stroke, cardiovascular death and systemic embolism compared to long-term warfarin therapy in 707 patients.

The prospective multi-center ASAP Study evaluated 150 patients with contraindications to warfarin, who were implanted with the Watchman device and treated with dual antiplatelet therapy for six months post-procedure. Subjects were followed for a mean average of 14.4 months. The study employed the widely recognized CHADS2 risk stratification score, which provides a clinical prediction tool for estimating the risk of stroke in patients with atrial fibrillation. The CHADS2 score has been validated by numerous studies and is regularly used to determine whether treatment is required with anticoagulation or antiplatelet therapy.

"Watchman is the most studied LAA closure device with more than 2,000 patients enrolled in prospective studies and nearly 4,000 patient-years of follow up," said Keith D. Dawkins, M.D., global chief medical officer for Boston Scientific. "This novel device has been well received in more than 30 countries where it offers a safe and effective alternative to long-term treatment with oral anticoagulants."

Atrial fibrillation affects approximately 15 million patients worldwide and is a disorder that disrupts the ability of the heart to beat regularly and pump blood efficiently. Patients in atrial fibrillation are at greater risk for stroke due to the migration of clots formed in the left atrial appendage (LAA). Anticoagulants such as warfarin have traditionally been the only therapy for reducing stroke risk in these patients. The Boston Scientific percutaneously-delivered Watchman device is an alternative to long-term anticoagulation in patients eligible for anticoagulant therapy. It is designed to close the LAA, thereby preventing clots forming within the appendage and being dislodged into the bloodstream where they can potentially cause a stroke.

The Watchman device was approved for marketing in Europe in 2009. Boston Scientific is currently enrolling U.S. patients in the PREVAIL study, a confirmatory study designed to gain U.S. Food and Drug Administration (FDA) approval. Enrollment is expected to be completed in the second quarter of 2012. The Watchman device is contraindicated in patients who are not eligible for anticoagulation therapy. In the United States, the Watchman device is an investigational device. The device was developed by Atritech, which Boston Scientific acquired in March 2011.