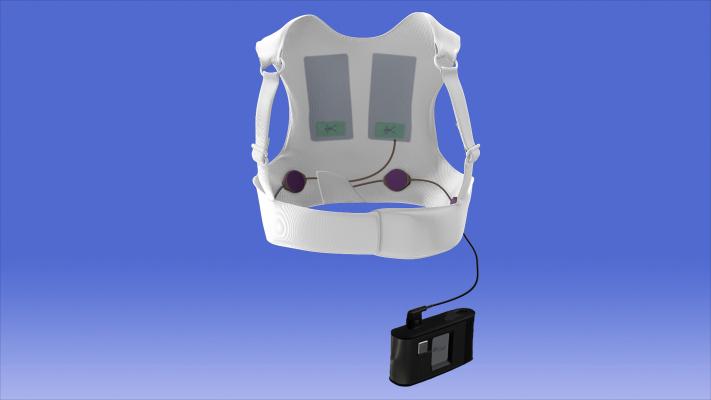 May 14, 2013 – Wearable cardioverter defibrillators (WCD) can be an effective therapy option for patients with a transient or undefined arrhythmic risk, according to the WEARIT-II Registry, the largest prospective study to track patients with the device in a real-world setting. The new findings show that the Zoll LifeVest WCD can serve as a bridging therapy and help avoid unnecessary permanent implantation of defibrillators in patients who ultimately may not need them. Findings were released at Heart Rhythm 2013, the Heart Rhythm Society’s 34th Annual Scientific Sessions.

WCDs provide continuous arrhythmia monitoring and automatic defibrillation within a minute of detection of a potentially fatal heart rhythm. These devices are worn under the patient’s clothes and have a response button that the patient can use during a cardiac event if a life-saving shock is not needed. The device can be part of an arrhythmia management strategy for a variety of patients at risk of sudden cardiac arrest and ultimately help determine if a patient needs permanent therapy through an implantable cardioverter defibrillator (ICD).

“While ICDs provide critical life-saving treatment, not all patients with an ICD receive appropriate therapy from their device,” said lead author Ilan Goldenberg, M.D., University of Rochester Medical Center. “A wearable device can provide the same level of protection without the need for an immediate invasive procedure, which allows a more reliable risk assessment and the patient’s cardiac function to improve before a decision to implant a defibrillator is made.”

The WEARIT-II study reviewed data from 882 patients between August 2011 and April 2013.

A total number of 70 sustained ventricular tachyarrhythmic events occurred in 21 patients. Of these events, 24 percent were treated with appropriate shocks from the device, and 76 percent terminated spontaneously because patients intentionally withheld shock therapy with a response button on the wearable device, thereby preventing unnecessary shocks from being delivered. The rate of inappropriate WCD therapy and death were low, 0.3 percent and 0.5 percent respectively.

Upon termination of WCD use, LVEF was found to improve in 41 percent of patients to the point that an ICD was no longer indicated, whereas only 42 percent of the patients required permanent implantation of an ICD. Therefore, without the WCD risk assessment strategy, many patients would be more likely to receive an unnecessary ICD. The WEARIT-II United States Registry is currently extending to Europe and Israel.