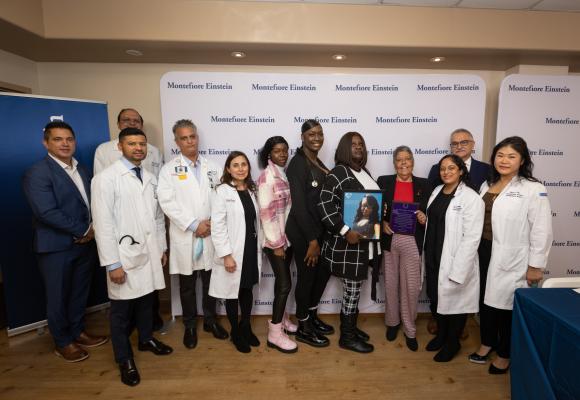 December 2, 2022 —  Westchester resident, 62-year-old Miriam Nieves, is especially grateful this Thanksgiving season. Earlier this year, she became the first HIV-positive person in the world to receive a lifesaving heart from an HIV-positive donor. Now, seven months after her surgery at Montefiore Health System, she is meeting her donor’s family for the first time and raising awareness about the need for more people to become organ donors.

Ms. Nieves’ story is one of struggle and triumph. After overcoming drug addiction, which resulted in her contracting HIV, Ms. Nieves went on to have a successful career, three children, and six grandchildren.

After years of recovery and effectively controlling her HIV, she experienced another health issue in 2006, when she was diagnosed with kidney cancer and needed to have one kidney removed. Nine years later, her remaining kidney started to fail, eventually requiring nightly dialysis. Her kidney function was so poor it was determined that she would need a kidney transplant. When a match became available, Ms. Nieves and her husband of 27 years, Julio, were relieved and overjoyed. However, devastatingly, when she was being assessed for the kidney transplant surgery, it was apparent that her heart function had deteriorated significantly, making it unlikely that she would survive the operation. Now Ms. Nieves would need a heart transplant too. She thought her chances were impossible.

Thankfully, her team of specialists at Montefiore had the experience and determination to find a solution. In 2013, the HIV Organ Policy Equity (HOPE) Act enabled people who had HIV to donate their organs to a HIV-positive recipient, but a HIV-to-HIV heart transplant had never been successfully performed. Montefiore infectious disease specialist, Vagish Hemmige, M.D., spearheaded efforts to develop the protocol and navigate the regulatory requirements, making Montefiore one of only two centers in the United States eligible to perform this novel surgery, and becoming the first in the country to make the surgery happen.

“Our experience with patients who had received other organs from HIV-positive donors convinced us that a HIV-positive heart donation could be carried out successfully,” said Dr. Hemmige, who is Ms. Nieves’ HIV care provider at Montefiore and associate professor of medicine and director of Medical Student Research at Albert Einstein College of Medicine.

“Sadly, many people with HIV waiting for a heart never receive one,” said Ms. Nieves’ cardiologist at Montefiore, Omar Saeed, M.D., M.S., who is also an associate professor of medicine at Einstein. “By successfully managing Ms. Nieves’ care, we have shown that HIV-positive donors are a lifeline, and we encourage more people to consider sharing this lifesaving gift.”

Once Ms. Nieves was listed for an HIV-positive heart, she was the only person on the transplant list eligible for such an organ, which meant she didn’t have to wait very long. Just a few days later, she was told there was a match. 1,500 miles away in Louisiana, 30-year-old Brittany Newton tragically passed away. Brittany was an aspiring nurse who, according to her family, had a heart of gold. In choosing to be an organ donor, and with the assistance of the Louisiana Organ Procurement Agency, Brittany became a hero, giving the gift of life to Ms. Nieves.

On November 22, surrounded by her medical team at Montefiore, Ms. Nieves met Brittany’s family for the first time.

“I am so grateful to the Newton family, and to Montefiore for taking a chance and extending my life,” said Ms. Nieves. “I hope other people see my story and start the conversation about organ donation as they gather with their families this Thanksgiving. I hope to inspire more people to become organ donors and see that they have the power to save lives.”