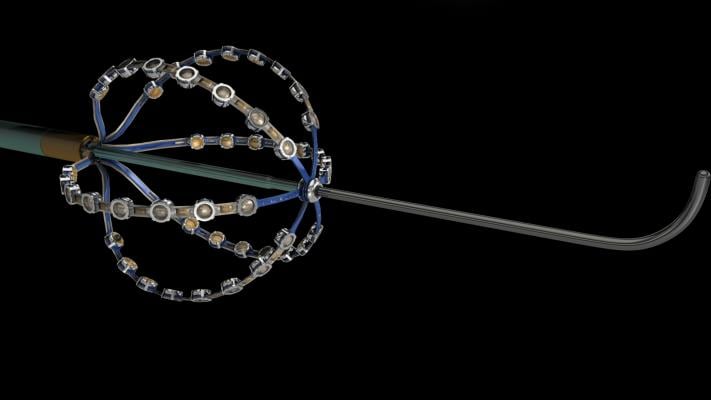 October 24, 2017 — Acutus Medical announced that the U.S. Food and Drug Administration (FDA) has cleared the AcQMap High Resolution Imaging and Mapping System and the AcQMap 3-D Imaging and Mapping Catheter for use in patients for whom electrophysiology procedures have been prescribed. The company plans to introduce initial commercial systems to U.S. customers in early 2018.

The AcQMap System has been used in Europe over the past two years in a number of clinical trials and commercial settings. Clinical safety results from the DDRAMATIC-SVT trial were used to support the company’s 510(k) clearance.

“We are extremely excited to have participated in the early clinical work and are now using the technology as part of a patient-specific strategy to assess and treat complex arrhythmias,” said Tom Wong, M.D., from the Royal Brompton Hospital in London, England. “The AcQMap System is able to provide global dipole density mapping of irregular and chaotic activation in the atrial chambers, whereas conventional sequential mapping may struggle to provide us with the information that is required. In the cases we have performed thus far, real-time mapping of complex arrhythmias has allowed us to focus on areas of interest and terminate the arrhythmia using ablation therapy. We can now offer individualized, tailored therapy, and are one step closer to identifying the mechanisms of complex arrhythmias.”

The AcQMap High Resolution Imaging and Mapping System detects and displays both standard voltage-based and higher resolution dipole density (charge-source) maps. The AcQMap System combines ultrasound anatomy construction with an ability to map the electrical-conduction of each heartbeat to identify complex arrhythmias across the entire atrial chamber. Following each ablation treatment, the heart can be re-mapped in seconds to continually visualize any changes from the prior mapping.

Watch a VIDEO demonstration of the system in a patient case.