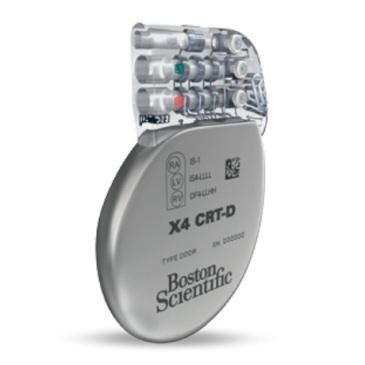 March 4, 2016 — Boston Scientific has received U.S. Food and Drug Administration (FDA) approval for the Acuity X4 quadripolar left ventricular (LV) leads. The FDA approval of the quadripolar leads, the wires that connect cardiac resynchronization therapy (CRT) devices to the heart, marks the first time the company will offer a full X4 CRT system – both the device and the leads – to the U.S. market.

The family of Acuity X4 quadripolar LV leads is engineered with four electrodes along a unique 3-D shape. The leads are designed to enable physicians to place them in the vasculature easily and to allow pacing at an optimal site to improve the patient response to CRT therapy.

FDA approval of the leads was based on data from the NAVIGATE X4 study, a prospective, non-randomized, multicenter clinical trial that enrolled 764 patients. The study successfully met the primary safety and efficacy endpoints through six months of follow-up.

"Data collected in the NAVIGATE X4 study demonstrate that these leads are safe and effective for use with CRT devices," said Suneet Mittal, M.D., principal investigator, director of the electrophysiology laboratory for Valley Hospital Health System in Ridgewood, N.J. "The approval is a testament to the strength of the data in this trial, which also demonstrated fast lead implant times, stable lead placement and improved pacing performance resulting from the unique design of the Acuity X4 leads."

Earlier this month, the company initiated the global ENABLE MRI study, which is intended to support FDA approval for magnetic resonance imaging (MRI) across the company's currently approved implanted cardiac defibrillation (ICD) and CRT systems. The newly approved family of Acuity X4 quadripolar LV leads will be used in this study, which is expected to enroll as many as 500 patients at approximately 60 sites worldwide. Trial findings will be submitted to regulatory authorities in Asia and the United States when the company requests updated labeling for MRI-conditional use on ICD and CRT systems, including those that have previously been implanted.

The MRI-conditional labeling in the U.S. would include current and future families of Extended Longevity (EL) and Mini ICDs and the X4 cardiac resynchronization therapy defibrillator (CRT-D) systems, including leads. In August of 2015, the company received CE Mark on MRI conditional labeling on its EL and Mini ICDs and X4 CRT-D systems, as well as the Acuity X4 quadripolar LV leads, Ingevity and Fineline II pacing leads and Reliance 4-Site and 4-Front defibrillator leads. The X4 line of CRT-Ds includes the Dynagen X4 and Inogen X4 in the U.S.