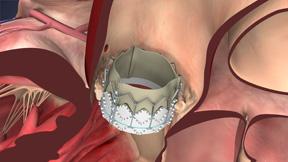 October 19, 2012 — Edwards Lifesciences announced today it received approval from the United States Food and Drug Administration (FDA) to treat high-risk aortic stenosis patients with the Edwards Sapien transcatheter aortic heart valve delivered both transfemorally and transapically (through the ribs). With the addition of high-risk patients to those eligible for the transcatheter procedure and with the approval of the transapical approach, a considerably broader group can now be treated with the Sapien valve.

Previously, Sapien was approved in the United States only for the treatment of inoperable patients via the transfemoral approach. “Any procedure to replace the aortic valve carries the risk for serious complications, but for some patients with coexisting conditions or diseases, that risk may be especially high,” said Christy Foreman, director of the Office of Device Evaluation at FDA’s Center for Devices and Radiological Health. “The transcatheter heart valve serves as an alternative for some very high-risk patients.”

The FDA first approved the Sapien in 2011 for patients with inoperable aortic valve stenosis, a progressive, age-related disease. Clinical studies to support the expanded approval included a clinical study of 348 surgical patients who received the Sapien and 351 similar patients who received aortic valve replacement (AVR) through open-heart surgery. Both groups had similar death rates at one month, one year and two years after the procedures.

"We are thankful to the multidisciplinary heart teams who worked diligently throughout the PARTNER Trial to bring new treatments to U.S. patients at high risk for surgical aortic valve replacement," said Larry L. Wood, Edwards' corporate vice president, transcatheter heart valves. "It is extremely rewarding for us and our clinical partners to know that high-risk patients suffering from this often debilitating disease will now have access to this life-saving therapy."

In performing the transcatheter aortic valve replacement (TAVR) procedure, the valve is crimped onto the catheter-based delivery system and inserted into the body in one of two ways: transfemorally or transapically. Once delivered to the site of the patient's diseased valve, the Sapien valve is expanded with a balloon and immediately functions in place of the patient's native aortic valve.

The Edwards Sapien valve is indicated for the treatment of patients with severe symptomatic calcified native aortic valve stenosis who have been examined by a Heart Team, including an experienced cardiac surgeon and a cardiologist, and found to be inoperable or at high risk for traditional open heart surgery, and in whom existing co-morbidities would not preclude the expected benefit from the procedure.

The safety and effectiveness of the Sapien valve were evaluated in a randomized, controlled pivotal study called the PARTNER Trial. Edwards submitted a Premarket Application (PMA) in April 2011 based on data from the high-risk cohort (Cohort A) of the PARTNER Trial. Cohort A compared the outcomes of patients at high risk for traditional open-heart surgery randomized to receive either surgical aortic valve replacement or the Sapien valve via transfemoral or transapical delivery. The trial was successful in meeting its primary endpoint at one year, concluding that survival of high-risk patients treated with the Sapien valve was equivalent to those treated with traditional open-heart surgery.