FDA Expands Use of CoreValve for Aortic Valve-in-Valve Replacement 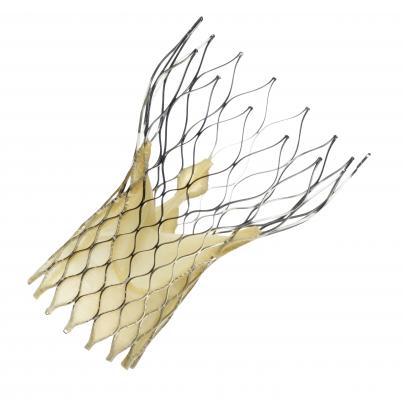 March 31, 2015 — The U.S. Food and Drug Administration (FDA) expanded the approved use of the CoreValve self-expanding transcatheter aortic valve replacement (TAVR) system to treat certain patients who have previously had a surgically implanted tissue aortic valve replacement and are in need of a second one. This is the first transcatheter heart valve approved in the United States for valve-in-valve procedures in both high and extreme risk patients who have limited options or may otherwise go untreated.

Each year, approximately 200,000 people worldwide receive surgical aortic valves, which typically last 15 years or more.[1]  When a surgical valve degenerates over time, patients may require another valve replacement. However, some patients are too sick or frail for a second open-heart surgery and the transcatheter valve-in-valve (VIV) procedure may now provide them with a new treatment option.

“The CoreValve System offers a less invasive treatment option for a significant number of patients with failed tissue aortic valves whose medical teams determine that the risks associated with repeat open-heart surgery are high or extremely high,” said William Maisel, M.D., deputy center director for science and chief scientist in the FDA’s Center for Devices and Radiological Health. “The approval is an important expansion of the authorized use of the transcatheter aortic valve replacement technology.”
Valve-in-Valve Procedures
During the VIV procedure, the CoreValve is placed inside a failing surgical heart valve with an inner diameter from 17-29 mm through a low-profile, 18 French delivery catheter, which is approved for use with all four CoreValve sizes (23, 26, 29 and 31 mm), as well as three delivery approaches (transfemoral, subclavian and direct aortic). The CoreValve is then released from the end of the catheter and expands on its own so it anchors to the old valve. Once the device is in place, it opens and closes properly, restoring the aortic valve function.
The CoreValve is an artificial heart valve made of tissue obtained from the heart of a pig. For support, it is attached to a flexible, self-expanding metal frame made of nickel-titanium alloy. It is engineered with a supra-annular valve design, which helps maximize blood flow for patients whose artificial heart valves have shown either stenosis, regurgitation, or both.
Clinical Data
To evaluate the safety and efficacy of the CoreValve system for aortic VIV replacement, the FDA reviewed clinical data collected from a clinical trial conducted in the United States of 143 participants. Outcomes from an Expanded Use Study, an observational arm of the CoreValve U.S. Pivotal Trial, demonstrated low rates of mortality and stroke (for a combined rate of 4.2 percent at 30 days and 10.7 percent at six months) and significant improvements in hemodynamics and quality of life in patients with failed surgical heart valves. Results from the largest global VIV registry also showed the VIV approach resulted in considerable hemodynamic improvements, including a decrease in blood flow resistance. In this registry, positive procedural outcomes were maintained at one year follow-up with 89 percent survival, which was comparable with other non-VIV TAVR studies.[2]  The data compares well to the corresponding rate reported previously for trial participants who received the same device to replace their own, native diseased or damaged aortic valve.
The major risks observed in the clinical trial included death, stroke, acute kidney injury, heart attack, bleeding, complications with the arteries used to insert the valve and the need for a permanent pacemaker. Bleeding and major complications with the arteries were the most frequently observed early adverse events. Medtronic, the manufacturer of the CoreValve System, will continue to follow study participants up to five years in a required post-market study to assess the long-term performance of the device.
FDA Indications
The FDA said the aortic VIV use of the CoreValve should be limited to patients who need replacement of a failed tissue aortic valve, but are at extreme or high risk of death or serious complications from traditional open-heart surgery. The decision regarding whether the product and procedure is appropriate for a particular patient should only be made after careful evaluation by the patient’s heart medical team, including a cardiologist and a cardiac surgeon. The CoreValve System should not be used in patients who have any infection; have a mechanical aortic heart valve; cannot tolerate blood-thinning medicines; or have sensitivity to titanium, nickel or contrast media.
The FDA previously approved the CoreValve in 2014 to treat patients whose own aortic valve has become severely narrowed as a result of aortic stenosis and who are considered to be at extreme risk for surgical aortic valve replacement. Last June this was expanded to include high-risk sugical patients. The system received European CE mark for VIV procedures in May 2013.  The CoreValve system has been implanted in more than 75,000 patients in more than 65 countries since receiving CE mark in 2007.
For more information: www.medtronic.com
References:
1. Brown JM et al. The Journal of Thoracic and Cardiovascular Surgery. V.137; No.1; 1/09; p82
2. Dvir, D. et al. “Transcatheter Aortic Valve Replacement for Degenerative Bioprosthetic Surgical Valves: Results From the Global Valve-in-Valve Registry.” Circulation. October 2012.