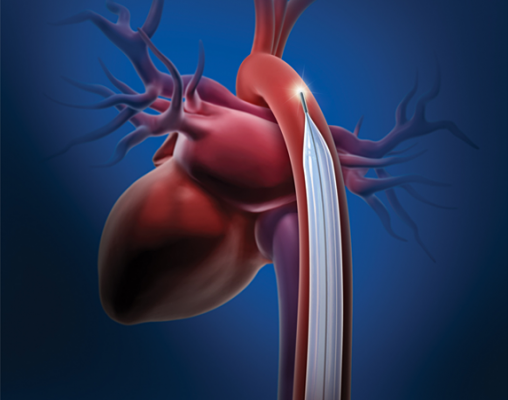 October 30, 2012 — Maquet Cardiovascular received 510(k) clearance from the U.S. Food and Drug Administration (FDA) and CE mark approval for its new Sensation Plus 7.5 French 40 cc intra-aortic balloon (IAB) catheter. This new larger-volume, fiber-optic IAB catheter will allow clinicians to provide a higher-efficacy IAB counterpulsation therapy “at the speed of light” to smaller patients. It will be available for sale in the United States and in Europe in October.

“Over the last 12 months, Maquet has launched two new families of IAB catheters, as well as a new balloon pump, Cardiosave — all of which are designed to revolutionize counterpulsation therapy, from both an efficacy and safety perspective,” said Christian Keller, president and CEO of Maquet Cardiovascular.

Since October 2011, Maquet has added new sizes to its higher efficacy IAB product lines to improve the delivery of hemodynamic support to the most critically ill patients. In addition to the Sensation Plus 8 French 50 cc catheter, Maquet has launched the Sensation Plus 7.5 French 40 cc IAB for patients 5 feet to 5 feet 4 inches (152 to 162 cm). Earlier this year, the company introduced its new Mega IAB catheters, a family of larger volume catheters (30 cc, 40 cc and 50 cc) that allow clinicians to provide a significant increase in hemodynamic support to patients at any height. In 2012, Maquet also launched Cardiosave, the company’s new fiberoptic IAB pump designed with a large touch screen display and is smaller, lighter and quieter than other pumps.

Features and Benefits of Sensation Plus IAB Catheters

Sensation Plus IAB catheters are a technological first in improved hemodynamic support, offering all of the benefits of Maquet’s easy-to-use IAB fiberoptic technology with the increased clinical effectiveness that larger volume IABs offer. Larger volume balloons displace more blood in the aorta during diastole, resulting in improved diastolic augmentation and systolic unloading.

The Senstaion Plus IAB catheters automatically calibrate in the patient after insertion and automatically recalibrate in vivo every two hours or sooner if patient or environmental conditions change. The result is faster time to therapy, ongoing consistency and accuracy of the arterial blood pressure waveform, and improved ease-of-use.

Like Maquet’s Mega IAB catheters, the Sensation Plus IAB catheters come with two Statlock IAB stabilization devices, which allow the catheter to be secured to the patient's leg without sutures. This is more comfortable for the patient and eliminates the risk of suture needle sticks for the clinician when initiating counterpulsation support.