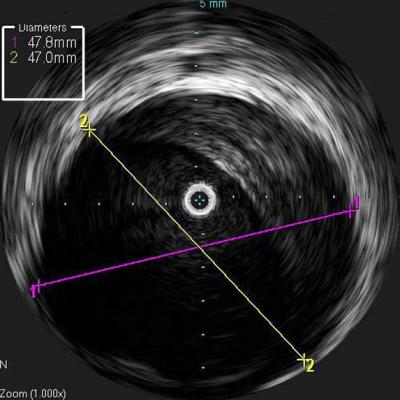 October 19, 2012 — Volcano Corp., a developer and manufacturer of precision-guided therapy tools designed to enhance the diagnosis and treatment of coronary and peripheral vascular disease, announced it has received both U.S. Food and Drug Administration (FDA) clearance and CE mark to market its new Visions PV .035 digital IVUS catheter in both the United States and Europe. The new IVUS (intravascular ultrasound) catheter is designed to image large vessels and facilitate the use of less iodinated contrast in endovascular procedures.

"Endovascular repair is preferred over open surgical repair by many patients because of its less invasive nature, shorter recovery times and lower complication rates for patients with suitable anatomy," said David Sheehan, chief operations officer and intravascular imaging business unit leader for Volcano. "However, precise device sizing and placement is critical for positive outcomes. Volcano believes IVUS can play an important role in guiding endovascular and other peripheral therapies. The development of this new catheter is just one example of our advancing commitment to this area.

"Another challenge in endovascular repair is renal insufficient patients," he added. "These patients are susceptible to acute kidney injury – a condition associated with high cost, morbidity and mortality – due to intraoperative use of iodinated contrast. Using our Visions PV .035 catheter with new centimeter markers reduces the amount of contrast needed, thus minimizing risk and creating more options for these patients."

Scott Huennekens, president and CEO, added, "Our share leadership in worldwide intravascular and peripheral imaging is because we innovate products that are clinically relevant and improve outcomes for our physicians. Moreover, we continue to add new and improved peripheral products that all work on our existing multimodality platform."

Company officials point to a study conducted in Osaka, Japan, published in the European Journal of Vascular and Endovascular Surgery that demonstrated the use of IVUS resulted in significantly less contrast needed during endovascular aortic repair (EVAR). The new centimeter markers make these procedures faster and easier and eliminate the need for additional marker catheters or a sterile ruler.