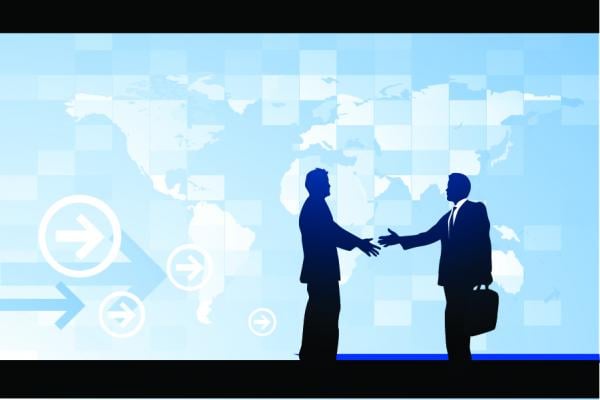 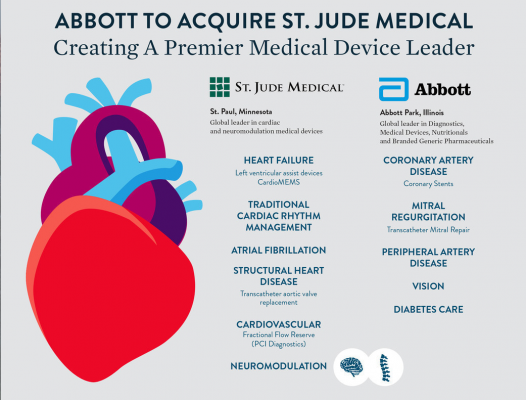 With combined annual sales of approximately $8.7 billion, Abbott's cardiovascular business and St. Jude Medical will hold the No. 1 or 2 positions across large and high-growth cardiovascular device markets and will compete in nearly every area of the market — with an aggregate market opportunity of $30 billion.

"Today's announcement is an exciting next chapter for St. Jude Medical, bringing together two industry leaders with a shared passion for innovation, culture and patients," said Michael T. Rousseau, St. Jude Medical president and chief executive officer. "Our combined scale will expand the global reach, competitiveness and impact of our medical device innovation for physicians and hospitals. This transaction provides our shareholders with immediate value and the opportunity to participate in the significant upside potential of the combined organization. I'd like to thank our 18,000 employees whose hard work and commitment help us deliver leading medical technologies to patients around the world."

Under the agreement, St. Jude Medical shareholders will receive $46.75 in cash and 0.8708 shares of Abbott common stock, representing total consideration of approximately $85 per share. At an Abbott stock price of $43.93, this represents a total transaction equity value of $25 billion.

The acquisition of St. Jude Medical is expected to be accretive to Abbott's adjusted earnings per share in the first full year after closing and increasing thereafter, with approximately 21 cents of accretion in 2017 and 29 cents in 2018. Abbott said the combination is anticipated to result in annual pre-tax synergies of $500 million by 2020, including both sales and operational benefits. One-time deal-related costs and integration costs will be provided at a future date.

St. Jude Medical's net debt of approximately $5.7 billion will be assumed or refinanced by Abbott. Abbott said it intends to fund the cash portion of this transaction with medium- and long-term debt.

Since 2008, Abbott and St. Jude Medical have been in a sales alliance that provides mutual U.S. customers access to both companies’ portfolios of interventional cardiology, cardiac rhythm management, EP and intravascular imaging and diagnostic technologies. The companies renewed and enhanced that alliance in 2012, where both companies agreed to jointly promote each other's product offerings when developing contract solutions with hospital customers in the United States. A separate distribution agreement between the two companies granted Abbott the rights to distribute the St. Jude Medical Ilumien PCI Optimization System, the only integrated FFR and OCT platform in the United States.

Abbott purchased Alere Inc. in February for $5.8 billion. Alere offers the handheld, point-of-care Triage MeterPro testing system, which is similar to Abbott’s i-STAT system. The MeterPro can measure, among other things, troponin level in cardiac patients. Once the transaction is completed, Abbott's total diagnostics sales is expected to exceed $7 billion after the close.

Abbott is a leader in interventional cardiology, offering the market leading Xience V drug-eluting stent and an array of tools for access, catheter guidance and vascular closure. The Absorb stent is the first bioresorbable stent to face U.S. Food and Drug Administration (FDA) review, with a final decision possible later in 2016. The Abbott MitraClip is the first and only transcatheter mitral valve repair system approved in the United States.