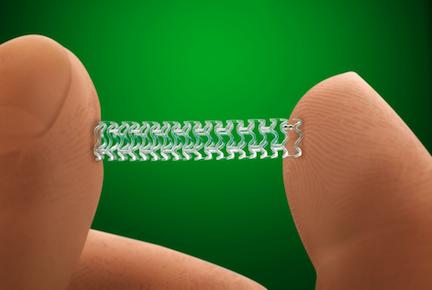 October 16, 2015 — Results from a clinical trial showed that Abbott's Absorb everolimus-eluting bioresorbable vascular scaffold was non-inferior after one year compared to Abbott's Xience V, the best current generation metallic drug-eluting stent (DES) on the market. The trial compared the two stents in patients with coronary artery disease and measured target lesion failure (TLF) was the primary endpoint. Findings from the ABSORB III trial were presented at the 2015 Transcatheter Cardiovascular Therapeutics (TCT) scientific symposium. The study was also published in the New England Journal of Medicine.

As the largest and pivotal clinical trial designed for regulatory approval, data from the ABSORB III trial will be reviewed by the U.S. Food and Drug Administration (FDA) as it considers whether or not to approve this device. With the positive trial results, it is possible the FDA may consider approval of the stent for the U.S. market in the coming months. If approved, it would be the first fully bioresorbable vascular scaffold (BVS) on the U.S. market.

BVS have been developed to provide mechanical support and drug delivery functions similar to DES for approximately one year, followed by complete absorption back into the body over about three years, potentially improving long-term clinical outcomes. However, whether BVS are as safe and effective as DES within the first year had not yet been established.

• A primary endpoint of target lesion failure (TLF) of 7.8 percent for Absorb and 6.1 percent for Xience (non-inferiority p<0.007, no statistically significant difference), demonstrating that both devices are comparable in treating people with CAD. TLF is a composite of heart disease-related deaths, heart attacks attributed to the treated vessel, and repeat procedures within the treated lesion caused by ischemia (lack of oxygen in the treated vessel).

• All pre-specified secondary endpoint results were not statistically different.

• There was no statistically significant difference in the rate of definite and/or probable stent thrombosis (ST).

“Bioresorbable vascular scaffolds are the newest generation of stent technology aimed at improving long-term outcomes in patients,” said lead investigator Dean J. Kereiakes, M.D., medical director of The Christ Hospital Heart and Vascular Center and the Lindner Research Center in Cincinnati, Ohio. “Results from the ABSORB III trial showed that treatment of non-complex obstructive coronary artery disease with BVS was non-inferior to the best in class CoCr-EES for target lesion failure at one year. Long-term follow-up data from this and other large-scale trials are required to determine whether these findings translate into improved longer-term clinical outcomes beyond one year.”

Gregg W. Stone, M.D., study chairman of the ABSORB III trial noted, “This device may be an attractive alternative for young patients, for those with acute coronary syndromes in whom metallic stents heal poorly, and for patients and physicians wishing to avoid a permanent implant. The real potential advantages, however, are expected to emerge over time as the device dissolves, restoring the normal functioning of the coronary artery.” Stone is co-director of the Cardiovascular Research Foundation’s Medical Research and Education Division. He is also professor of medicine at Columbia University College of Physicians and Surgeons and director of cardiovascular research and education at the Center for Interventional Vascular Therapy at New York-Presbyterian Hospital/Columbia University Medical Center.

At this year's TCT, Abbott also presented positive one-year results from ABSORB China, a prospective, randomized, single-blinded, controlled trial that compared Absorb to Xience to support Absorb approval in China. The trial met its non-inferiority primary endpoint of in-segment late loss at one year, with Absorb at 0.19±0.38 mm and Xience at 0.13 ±0.38 mm (P non-inferiority=0.01). The trial enrolled 480 people at 24 sites throughout mainland China. The results were published simultaneously in the Journal of the American College of Cardiology. During TCT Abbott will present additional data from the Absorb family of trials, which have collectively involved more than 13,000 people.