Passive and active technologies are being used in combination with compression to speed hemostasis, ambulation and improve efficiency 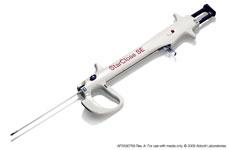 Manual compression remains the gold standard of care in sealing interventional access site wounds, but there is a trend toward newer technologies that promise to simplify post-operative care for nursing staff, requiring less monitoring time, helping increase patient throughput and maximizing the use of staff time. Hemostatic pads impregnated with substances to speed the clotting cascade can cut manual compression times to as low as three minutes. Compression bands, especially for radial access procedures, increase patient comfort and eliminate the need for nursing staff to maintain wound compression. Vascular closure devices can instantly plug, suture or clip the arteriotomy closed.

Approximately 7 million invasive cardiovascular procedures are performed worldwide each year, and this number is expected to increase with the aging of the population.[1]  According to a 2010 American Heart Association scientific statement on closure devices, vascular access complications in these procedures are reported to be as high as 6 percent in some studies and are the leading cause of morbidity after a cardiac catheterization procedure.[1,2]  For this reason, vendors have developed several approaches to vascular closure devices in an attempt to lower these complication rates.

Several types of passive devices (such as clamps for assisted compression, coagulant patches and sealants) and active devices (clips, sutures) have been introduced to the market.

Vascular closure devices (VCDs) were introduced to reduce access site bleeding complications and reduce the time to hemostasis and ambulation. There are two types of VCDs. Passive devices include clamps for assisted compression and newer technologies, like assisted coagulant patches and sealants. Active devices use sutures, collagen plugs, nitinol clips and other mechanisms to achieve hemostasis.[1]
According to a Life Science Intelligence report entitled “2008 Global Vascular Closure Device Markets: U.S., Europe, Rest of World,” the global market for vascular closure devices is expected to reach nearly $1 billion in 2013.[3]

New Vascular Closure Devices
The AccessClosure Mynx Cadence is an improved version of the Mynx device, launched in January 2011. Three design changes on the device make it easier and more consistent to deploy. A definitive shuttle stop when deploying the sealant reduces the possibility of over-shuttling. Additionally, a single marker on the advancer tube removes any guesswork about sealant compression. Finally, a new sealant sleeve protects the sealant during deployment and shortens the procedure time by eliminating the need to pre-soak during device preparation. These changes result in more consistent sealant delivery.

The Arstasis Axera device, commercially launched in May 2011, creates a shallow-angle needle pathway through the wall of the femoral artery. This results in significantly more tissue-on-tissue overlap through the artery. When the sheath is withdrawn, the shallow-angle pathway collapses from the normal pressure of the patient’s femoral artery blood flow and approximately three to four minutes of mild, non-occlusive finger-pressure seals the access site.

The Axera is a second-generation device from Arstasis. It replaced the first-generation Arstasis One device, which underwent a recall in October 2010 due to components of the device fracturing and/or separating during use.

The Cordis Exoseal VCD was granted U.S. Food and Drug Administration (FDA) clearance in June 2011. It uses a bioabsorbable polymer (polyglycolic acid – PGA) plug to seal femoral artery punctures. To help with the positioning and deployment, the delivery system incorporates two markers to determine the location of the plug relative to the outside of the vascular wall prior to deployment.

Coated Pads Speed Hemostasis
Several types of impregnated dressings have been introduced as an adjunct to manual compression.

The QuikClot Interventional dressing made by Z-Medica uses a kaolin (a mineral extracted from clay) impregnated bandage to achieve hemostasis for femoral access site bleeding within three minutes. The pad comes with a Tegaderm transparent dressing to hold it in place. The U.S. military uses QuikClot bandages with troops serving in combat zones overseas. Originally developed in 2002, the technology was expanded for several specialty uses, including interventional cardiac procedures.

Both Marine Polymer and HemCon offer dressings impregnated with a chitosan compound to help clot blood. Marine Polymer uses cultures of marine micro algae, while HemCon uses chitosan derived from shrimp shells. Marine Polymer sells, among other hemostatic products, the SyvekPatch, which has been used in more than 3 million cardiac catheterization procedures in hospitals throughout the country. HemCon obtained FDA clearance to sell its own products, using the SyvekPatch as a predicate device, primarily to the military. However, HemCon made inroads into the civilian market, directly competing with Marine Polymer in the interventional cardiology market.

In 2006, Marine Polymer filed a lawsuit against HemCon, alleging violation of a patent covering its chitosan compound. A jury awarded damages of $29.4 million against HemCon for patent infringement. However, in September 2011, the U.S. Court of Appeals, Federal Circuit reversed the decision based on a technicality of Marine Polymer’s original patent language and the claims it asserted in the case.
Another agent used to promote rapid hemostasis is Biolife’s BioSeal Advanced. Rather than impregnating a dressing with its potassium ferrate polymer agent, it is poured onto the wound site as a powder.

Radial Access Site Closure
The small size of the radial artery and the ease in which it can be compressed eliminates the need for VCDs. The wrist is also small enough to facilitate the use of inexpensive compression band bracelets. There are numerous types of bracelets and all offer ways to adjust the amount of compression on the wound.

The Zoom 2010 Transradial Compression Bracelet from Zoom Co Medic can be adjusted by tightening the knob to increase or decrease the pressure as needed.

Several bands come with dressings attached to the wound side of the device, many using coated hemostatic pads. The Bengal Radial Compression Band (introduced in September 2010, sold by AccessClosure) combines a compression pad with a soft polymer gel that ensures patient comfort while the band is on the wrist.

Terumo Interventional Systems offers the TR Band, which uses a transparent band and pressure balloons to enable unobstructed visualization and monitoring of wound.