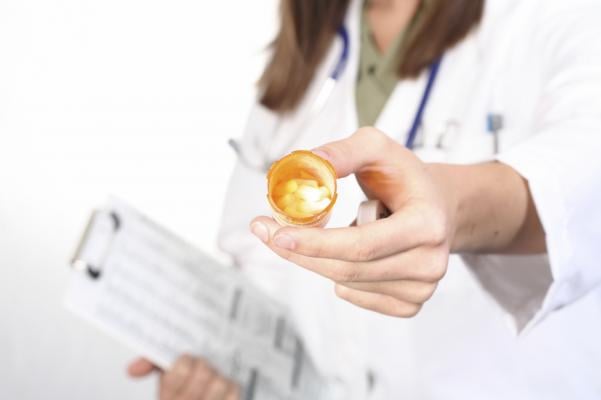 With the recent introduction of several novel oral anticoagulants (NOACs) on the U.S. market that have been billed by the drug makers as possible replacements for warfarin (Coumadin), there are several clinical considerations when comparing these agents.

There was a lot of interest in the introduction of NOACs for the prevention and treatment of thrombosis. These novel agents include dabigatran (Pradaxa) approved by the U.S. Food and Drug Administration (FDA) in 2010, rivaroxaban (Xarelto) cleared in 2011, apixaban (Eliquis) cleared in 2012 and edoxaban (Savaysa) approved in 2015. Dabigatran is a direct thrombin inhibitor. Rivaroxaban, apixaban and edoxaban are all factor Xa inhibitors.

NOACs have major pharmacologic advantages over warfarin, which is a vitamin K antagonist, including rapid onset/offset of action, few drug interactions and predictable pharmacokinetics. Warfarin has a narrow therapeutic window that can be affected by factors such as diet, so an issue for patients on warfarin is that they need to have their INR monitored regularly.  This monitoring may take place at anticoagulation (Coumadin) clinics. Although NOACs do not require regular laboratory monitoring, some patients may be referred to anticoagulation clinics for agent selection/initiation, transition to or from warfarin, or peri-procedural management.

The results of clinical trials demonstrated efficacy and safety for these agents are at least as good as warfarin (for stroke prevention in atrial fibrillation and treatment and secondary prevention of venous thromboembolism). However, the adoption of this new therapeutic class into clinical practice has been slower than expected due to several factors including concerns regarding medication adherence without laboratory monitoring, uncertainty about dosing in some patient populations (including renal dysfunction or extremes of body weight), and higher drug costs compared with warfarin.

(UPDATED 2019 information) In January 2019, the atrial fibrillation (AFib) treatment guidelines were updated to now recommend NOACs as the preferred alternative to warfarin for reducing the risk of stroke. This change was made in a focused update this to the 2014 American Heart Association (AHA), American College of Cardiology (ACC) and Heart Rhythm Society (HRS) Guideline for the Management of Patients With Atrial Fibrillation.[1]

The question of whether one agent is better than another was a topic of sessions at the 2016 American College of Cardiology Annual Scientific Sessions (ACC.16) in April. Bernard Gersh, M.B., CH.B., D.Phil, Mayo Clinic, Rochester, Minn., discussed the 2013 meta-analysis by Ruff et al., that compared the efficacy and safety of NOACs and warfarin. In this analysis, NOACs showed a reduction in hemorrhagic stroke (51 percent), all-cause mortality (10 percent) and intracranial hemorrhage (52 percent). However, they also increased gastrointestinal (GI) bleeds 25 percent when compared to warfarin. Gersh said NOACs are at least non-inferior to warfarin with regards to reduction of ischemic stroke.

If you take the available data from the clinical trials for these agents at face value, it is possible to come up with some niches where one agent appears to be better than the others.  See Table 1.

“We’re all in search of the ideal anticoagulant.  If you’re looking for the ideal oral anticoagulant, you’re going to die disappointed. The drug does not exist,” said Paul Dobesh, Pharm.D., FCCP, BCPS, professor, Department of Pharmacy Practice, College of Pharmacy, University of Nebraska Medical Center, Omaha. At ACC.16, he took a closer look at the potential differences between the NOACs and discussed some thought-provoking facts.

Dobesh noted all NOACs have been shown to be equal to or superior to warfarin using intent-to-treat or per protocol methods.[2-5]  All NOACs also have shown a statistically significant reduction in hemorrhagic strokes when compared to warfarin.[2-5] So, he explained the data for these newer agents do not differentiate one agent from another in these areas.

Apixaban and edoxaban were shown in trials to be safer than warfarin with regards to major bleeding,[4,5] and rivaroxaban and dabigatran showed no difference in major bleeding when compared to warfarin, he said.[2,3]  However, the ARISTOTLE and ENGAGE AF-TIMI 48 trials only counted a bleeding event if it occurred within two or three days after stopping the study agent. Dobesh said this raises the question if apixaban and edoxaban are safer, or if the difference is related to how bleeding events were counted.

Apixaban demonstrated a significant decrease in all-cause mortality compared to warfarin,[2] and all NOACs have shown about 10 percent reduction in all-cause mortality.[1-5] The ARISTOTLE study looked at 4,000 more patients than the other studies.[3] Dobesh raised the question of whether dabigatran, rivaroxaban and edoxaban would have reached statistical significance with larger study populations.

Regardless of which agent is used, clinical practice and research has shifted focus to decreasing the risk of bleeding for patients on oral anticoagulants and antithrombotics. While the newer agents might be better than warfarin on several points, the more effective ability to prevent clotting also results in the unwanted consequence of increased bleeding. This sentiment was echoed multiple times by speakers at ACC.16. The most common bleeding complication with NOACs compared to warfarin is gastrointestinal (GI) bleeding.  The results of the Ruff meta-analysis favored warfarin over NOACs for rates of GI bleeds (whether results from dabigatran trials were included or not).

“Major bleeds, as well as minor bleeds, may be a problem because patients stop their treatments — not only their antithrombotic treatment, but also the ACE inhibitors, statins and all other life-saving therapies,” explained Freek Verheugt, M.D., FESC, FACC, FAHA, professor of cardiology, Heart-Lung Centre of the University Medical Centre of Nijmegen and chairman of the Department of Cardiology at Onze Lieve Vrouwe Gasthuis, The Netherlands.

Several speakers said bleeding itself has now become an endpoint that cardiologists aim to avoid.

“The pendulum is shifting towards thinking about bleeding as an important aspect to think about in the patient who presents with atrial fibrillation or is in need of an oral anticoagulant and has to undergo a PCI [percutaneous coronary intervention],” said Roxana Mehran, M.D., FACC, FACP, FCCP, FESC, FAHA, FSCAI, professor of medicine and director of interventional cardiovascular research and clinical trials at the Zena and Michael A. Weiner Cardiovascular Institute at Mount Sinai School of Medicine, N.Y.

Below is a summary of trials currently investigating NOACs in patients with atrial fibrillation that need to undergo PCI. Of note, the primary outcome for each trial is related to safety and bleeding. See table 2. 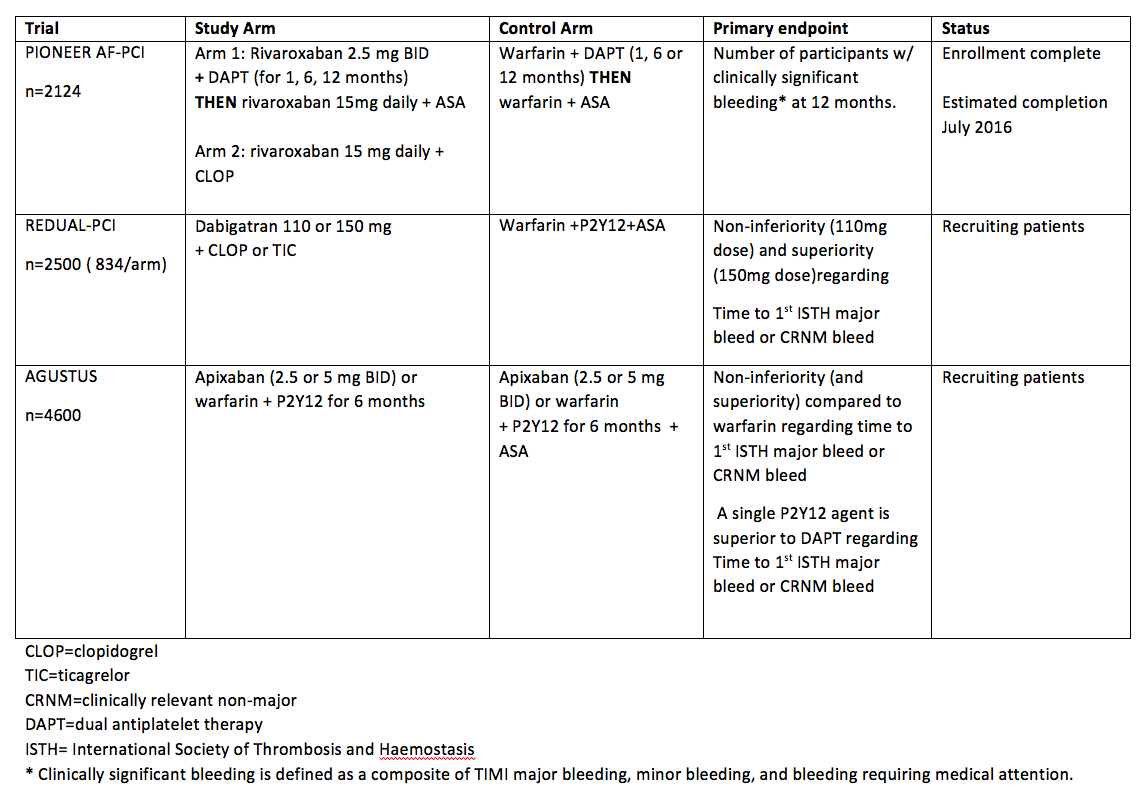 Evolution of the Anticoagulant Nomenclature

Read the article “Warfarin Use May Not Bring Long-Term Stability for Atrial Fibrillation.”