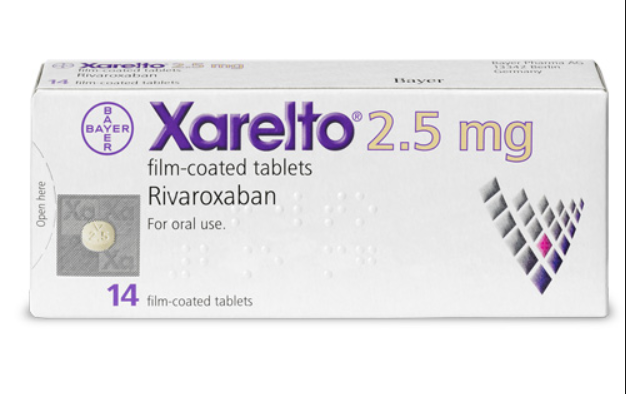 Rivaroxaban is among four new oral anticoagulants (NOAC) now recommended by atrial fibrillation guidelines over the old standard of warfarin.

January 30, 2019 — Updated atrial fibrillation (AFib) treatment guidelines released this week now recommend new oral anticoagulants (NOACs) as the preferred alternative to warfarin for reducing the risk of stroke. This change was made in a focused update this week to the 2014 American Heart Association (AHA), American College of Cardiology (ACC) and Heart Rhythm Society (HRS) Guideline for the Management of Patients With Atrial Fibrillation.[1] The focused update was published simultaneously in the AHA journal Circulation, Journal of the ACC and the HRS journal, HeartRhythm.
Anticoagulants have long been recommended to reduce the risk of stroke in patients with AFib who have an increased risk of thromboembolism. Warfarin has been used as the standard of care in these patients for years, but the drug has a very narrow therapeutic window requiring regular blood tests to ensure the level of warfare in the blood remains therapeutic. The protective effects of the drug also is impacted by vitamin K, so foods rich in vitamin K like green leafy vegetables can decrease its effect.
The newer class of non-vitamin K oral anticoagulants offers several advantages, such as eliminating the need for regular blood tests and not being impacted by vitamin K levels. NOACs are now the preferred recommended drug class over the traditional warfarin, unless patients have moderate to severe mitral stenosis or have an artificial heart valve. NOACs include dabigatran (Pradaxa), rivaroxaban (Xarelto), apixaban (Eliquis) and edoxaban (Savaysa).
“Patients with AFib are at increased risk of stroke, which can be devastating. A goal of treating AFib patients is to make blood less likely to form clots, which reduces the risk of stroke. New scientific studies show that NOACs may be safer for patients because there is less risk of bleeding, and they may also be more effective at preventing blood clots than warfarin,” said Craig T. January, M.D., Ph.D., co-chair of the focused update group. He is a professor of cardiovascular medicine at the University of Wisconsin in Madison.
The guidelines rank recommendations as strong, weak or harmful on the basis of the quality and quantity of the scientific research that supports each recommendation. Recommendations with the highest level of evidence have more than one randomized controlled trial reporting similar results, whereas the lowest-ranked recommendations are based on the clinical experience of experts.
Weight Loss Added to Guidelines
The new guidelines now include recommending weight loss for overweight or obese AFib patients. Studies find that losing weight can reduce the health risks associated with or even reverse AFib. It can also help lower blood pressure. High blood pressure is often associated with AF.
Reveral Agents Available for NOACs
The guidelines also point out that new drugs are now available to reverse the effect of NOACs. These reversal agents, while used infrequently, are helpful when there are signs of severe bleeding caused by a NOAC or when a patient on a NOAC needs an emergency surgical procedure
“AFib patients should talk to their healthcare provider about any concerns they have about their prescribed medications and whether or not losing weight would benefit their health,” said January.
The new guidelines also suggest that NOACs could even be used in people at lower risk of stroke than previously thought. Although the evidence for this recommendation is not yet definitive, emerging research is beginning to suggest that the benefit of NOACs for reducing stroke risk outweighs the risk of taking them, said January.
Co-authors of the guideline update include L. Samuel Wann, M.D. (co-chair); Hugh Calkins, M.D.; Lin Y. Chen, M.D.; M.S., Joaquin Cigarroa, M.D.; Joseph C. Cleveland, Jr., M.D.; Patrick T. Ellinor, M.D., Ph.D.; Michael Ezekowitz, MBChB, D.Phil.; Michael E. Field, M.D.; Karen Furie, M.D.; MPH, Paul Heidenreich, M.D.; Katherine T. Murray, M.D.; Julie B. Shea, M.S.; RNCS, Cynthia M. Tracy,  M.D. and Clyde W. Yancy, M.D.
How AFib Causes a Stroke
AFib is a type of irregular heartbeat in the atria, or upper chambers of the heart. Because the heartbeat is irregular, blood can pool and then clot inside the atria, particularly in the left atrial appendage (LAA), a pouch that is part of the anatomy of the upper left chamber of the heart. If the clots formed within the left atrium migrate within the blood and reach the brain, a stroke caused by a blocked artery can occur even in people with no obvious symptoms of A-Fib.
Blood-thinning medications called anticoagulants have long been recommended to reduce the risk of stroke in patients with AF who have an increased risk of thromboembolism (a blockage of a blood vessel by a clot travelling in the bloodstream) and/or stroke caused by narrowed or blocked arteries.
Related NOAC Content:

Most Atrial Fibrillation Patients Do Not Get Preventive Drug Before Stroke

Warfarin Use May Not Bring Long-Term Stability for Atrial Fibrillation