Is Cardiac Cell Therapy Worth Another Look? 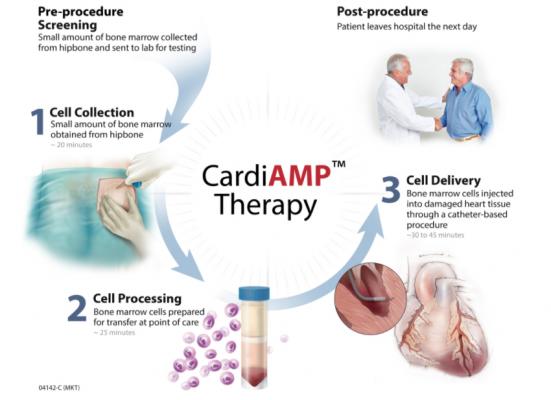 The BioCardia cardiac stem cell CardiAMP trial is a Phase III study looking at the efficacy of using stem cells to improve heart function in heart failure patients. It is the first trial for this technology to reach Phase III trial.

Heart failure remains an unheralded global pandemic, costing society billions of dollars each year.[1,2] Projections indicate that the incidence of heart failure will continue to increase.[3] The unprecedented growth in cardiac failure in aging populations will challenge existing systems of care and should cause us to re-examine adjunctive and alternative types of therapy.

On the spectrum of current heart failure treatments, there are essentially only four pharmaceutical recommendations that exist for the treatment of heart failure: SGLT2 inhibitors and loop diuretics, angiotensin-neprilysin inhibitors, beta blockers, and mineralocorticoid antagonists.[4] These agents control aspects of this progressive disease, but do not fundamentally address critical pathways in the pathogenesis of the syndrome.

At the other end of the therapeutic spectrum, open-heart surgical procedures, involving left ventricular assist devices (LVAD) insertion and/or heart transplantation, are potential options but are drastically invasive and not uniformly accessible because of morbidity, quality of life concerns, cost and a paucity of donors. Although all these FDA-approved pharmaceutical and surgical treatments exist in the heart failure armamentarium today, there remains a pressing need for the majority of heart failure patients for whom medical therapy is not enough, and surgery is inappropriate. Those patients could benefit from a treatment modality that specifically addresses the problem in a different, and statistically significant, manner. The advent of directly injected cell therapy might represent this new and unique opportunity.

There have been a myriad of research efforts in the field of myocardial regenerative cell therapy over the last several decades that have held promise, but it remains frustrating that not a single cell or gene therapy designed for local delivery to the heart for congestive heart failure (HFrEF or HFpEF) has yet met criteria for approval by the FDA.

Initial attempts at developing cell therapies were inconclusive, an outcome that has generated skepticism and confusion regarding the potential efficacy of this approach.[5] However, positive paracrine effects and other sub-cellular signaling pathways induced by adequate numbers of critical stem cells (or their components)[6] have suggested the potential for profoundly positive effects in heart failure patients via mechanisms other than regenerating new myocardium.[7,8]

Conflicting, and perhaps confusing, initial results should have been expected due to differences in cell type and dosage, stage of disease, endpoint evaluation, and route of delivery. For example, in studies incorporating coronary arterial infusion, small freely circulating cells have generally failed to enter and remain in intra-myocardial tissue,[9] whereas larger culture-expanded cells have tended only to occlude the microvasculature.

Cell Therapy is not a Mechanical Fix for Heart Disease

At this point in time, it is critical to recognize that cell therapy is not a mechanical fix for the diseased heart. It is not analogous to coronary angioplasty, which mechanically widens a narrowed coronary artery, or the TAVR procedure, which physically replaces a diseased valve. The effects of stem cell therapy cannot be measured or observed immediately after the procedure, as is the case with the foregoing examples of intervention. The results are indeed more nuanced, and require special approaches to clinical assessment.

A particular approach that has historically received significant attention is the attempt to create new myocardial cells either by 1) directly transplanting them, or by 2) otherwise inducing the growth of neo-myocardium.[10] Work alleging that bone marrow cells are capable of becoming new heart cells,[11] has been publicly discredited, perhaps negatively impacting the credulity of later, more rigorous research efforts. Additionally, research into the effect of nuclear bomb testing on human DNA undertaken during the Cold War established the age of cardiomyocytes in humans[12] and showed that heart tissue repopulates very slowly.

Nonetheless, a number of research groups continue to explore the approach of creating new heart cells, in the face of such realistic obstacles as arrhythmia pathology and immunological rejection. These challenges underscore the current difficulty of cellular integration into heart muscle, the electro-physiologic circuitry obstacles being perhaps the most significant barrier.

Currently, excitement has been generated within the cell therapy landscape by companies whose stated purpose is to genetically modify cells into those that can repair or replace tissue in the body, including cardiac cells.

Blue Rock Therapeutics, which was acquired by Bayer for $1 billion, also seems to have created market expectations ostensibly based solely on animal work.

These extraordinary monetary commitments to cell therapy technologies indicate that cell therapy efforts to repopulate the diseased heart still hold commercial and biological interest, despite the very prolonged timelines required for their fruition.

While this pre-clinical work in cell regeneration continues, the magnitude of the heart failure problem grows exponentially worldwide, including both ischemic cardiomyopathy and heart failure from chronic myocardial ischemia. Despite current treatment modalities, heart failure patients continue an ineluctable decline in quality of life, physical function and life expectancy. Regrettably, millions of these patients will succumb to end-stage congestive cardiac failure while decades pass in attempting to regenerate the myocardium by direct cell-creation technology.

Today, there is ongoing robust clinical work into the science of cells that are not intended to become new myocardium. In both animal and human studies, these cells have shown clinical benefits after direct myocardial injection in the absence of transformation into neo-myocardium.

This parallel approach to cell therapy is in the clinic today in Phase III trials, and thus closer to reality. Research is exploring whether directly implanted cells can improve the state of the failing heart muscle in HFrEF and chronic ischemia by means of a paracrine effect (i.e. exosomes, cytokines, intracellular signaling, etc.). This intervention relies upon intrinsic cellular mechanisms to improve heart function.

A variety of cell types are being explored in this therapeutic strategy, including allogeneic mesenchymal stem cells and autologous mononuclear cells. The cells are not producing more heart muscle cells, but through paracrine effects and intracellular signaling, they are creating improved myocardial function, especially in low ejection fraction heart failure.

A leading approach that appears to have significant promise — and the only one currently enrolling patients in a Phase III clinical trial - combines minimal processing of autologous cells with a delivery system that has been shown to work well in delivering viable cells into the heart muscle.[13]  In Phase I[14]   and II[15,16] trials, and recently in an early cohort of the Phase III CardiAMP Heart Failure Trial,[17] this approach developed by BioCardia has shown that it can mitigate heart failure morbidity (and perhaps, hospitalization and mortality) by the aforementioned paracrine effects induced by direct cell implantation into the heart muscle, without open chest surgery.

What suggests that this intervention shows such promise? It may be the first to incorporate a specialized, selective bone marrow assay to qualify patients. This eliminates those candidates whose marrow has inadequate stem cell populations to elicit the positive paracrine response.

Minimally processing cells at the bedside rather than sending them out for intensive manipulation could also alter the efficacy outcome. Delivering a high dosage of specific stem cells directly into the weakened myocardium may magnify the positive paracrine effect. Indeed, it is doubtful that intravenous, coronary venous or coronary artery injection can be as efficient as targeted intra-myocardial injection.

There may be something about this unique combination of incorporating both a biological and mechanical approach that could offer a more salutary result than previously flawed attempts. The Phase III trial results, when available, should provide a definitive answer.

If the Phase III trial yields positive safety and efficacy evidence, it would be of monumental importance to the treatment of heart failure worldwide. It could be as transformative as the first angioplasty in 1977.

There is also a potential cost implication of the autologous stem cell approach. Cell therapy to date has been shown to be extremely expensive due to the need to process cells off-site and away from the patient. Using a patient’s own cells for therapy and moving processing to the bedside could significantly reduce the costs of direct heart cell therapy.

While these two approaches – attempted cell regeneration and stem cells with paracrine effects only – are very different, they may one day be able to operate synergistically.

Autologous or allogeneic (donor) stem cell therapies that do not become heart cells clearly have the potential to become the bridge between pharmaceuticals and intrinsic myocardial regeneration. A patient could come into the hospital for a day, and theoretically, with local anesthesia like a heart catheterization, have their own, or a donor’s cells safely implanted in their hearts with the expectation of improvement in longevity and quality of life. This does not alter the therapeutic advances made by the four cardinal medicines for heart failure already alluded to. It is clearly adjunctive.

Recognizing that a Phase III trial of this promising approach is underway, the jury remains out in the verdict on stem cell therapy.

FDA approval of early cardiac cell therapy for heart failure could facilitate the use of cells in broader cardiac indications (e.g., HFpEF, heart failure with preserved ejection fraction), as well as expand the possibilities for cell therapy in other tissues of the body.

About the author: Simon H. Stertzer, M.D., FACC, FAHA, FACP is professor emeritus, Stanford University School of Medicine. He is an innovator in interventional cardiology, having performed the first balloon angioplasty in the U.S. and pioneered such interventional procedures as selective coronary arteriography, cardiac pacemakers, rotational atherectomy, balloon aortic valvuloplasty and sheathless coronary stenting. He is founder of several innovative cardiac companies, such as Arterial Vascular Engineering (acquired by Medtronic), Quanam Medical Corp. (acquired by Boston Scientific) and BioCardia Inc., a manufacturer of devices and cell processes for direct cardiac implantation.

Disclosures: Stertzer is co-founder and former chairman of the board of BioCardia Inc.