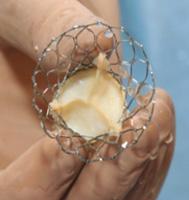 January 19, 2011 – The U.S. Food and Drug Administration (FDA) granted conditional approval to modify the CoreValve U.S. pivotal clinical trial to eliminate the medical management arm of the study. In the revised trial design, patients deemed at extreme risk will not be randomized to optimal medical management, where outcomes for these patients have been shown to be significantly worse than those treated with transcatheter valves.

The modification to the CoreValve trial allows for a single arm study with a primary endpoint of all?cause death or major stroke within 12 months. The revision also includes the evaluation of alternate implantation routes for delivering the transcatheter valve, such as the subclavian approach.

The modified trial will now include the assessment of alternative implantation routes, including the subclavian approach, in both patient populations. Transcatheter aortic valves traditionally are delivered through the femoral artery in the groin. These alternative routes will allow patients with poor peripheral vasculature (blood vessels) to be considered for treatment, thereby expanding the potential patient population.

“For some patients, transfemoral access simply is not feasible due to vessel size or impairment. Studying these patients will provide meaningful experience and data on the use of CoreValve via alternate access routes,” said David H. Adams, M.D., chair of the department of cardiothoracic surgery at The Mount Sinai Medical Center and national co?principal investigator of the CoreValve U.S. clinical trial.

The first implants in the Medtronic CoreValve U.S. pivotal clinical trial occurred last month. Overall, the trial will enroll more than 1,300 patients at 40 U.S. clinical sites, which are identified on www.clinicaltrials.gov. Additional information for patients and referring physicians can be found at www.aorticstenosistrial.com.

“We have taken extensive input from the medical community, our investigators and the FDA, and we are very pleased to proceed with modifications to the trial design based on these discussions,” said John Liddicoat, M.D., vice president and general manager of the Structural Heart division at Medtronic.

The CoreValve System is designed to provide a minimally invasive, nonsurgical treatment option for patients with symptomatic, severe aortic stenosis who are at high risk, or are ineligible, for open?heart surgery. Worldwide, approximately 300,000 people have been diagnosed with this condition, and approximately one?third of these patients are deemed at too high a risk for open?heart surgery,(1) the only therapy with significant clinical effect that is currently available in the U.S. The Medtronic CoreValve System is not yet commercially available in the U.S.