October 6, 2021 — Data presented during the late-breaking science session at the European Society of Cardiology (ESC) 2021 Congress showed the integration of perivascular fat attenuation in coronary vessels using computed tomography (CT) scans has the potential to significantly advance the prognostic utility of cardiac CT analysis in the investigation and management of coronary artery disease risk.

Although it has been known for decades that atherosclerosis is an inflammatory disease and that plaque rupture is driven by inflammation, thus far there have not been any noninvasive imaging tools to detect and monitor coronary inflammation.

CaRi-Heart analysis, developed by start-up vendor Caristo Diagnostics, builds on scientific work undertaken at the University of Oxford that has highlighted the biological importance of perivascular adipose tissue surrounding the coronary artery. Analyzing this in coronary CT angiography (CCTA) imaging offers the ability to “sense” the presence of coronary inflammation. Cytokines released by an inflamed coronary artery cause changes in the size and composition of adipocytes surrounding the artery. Importantly, these changes can occur before any atherosclerotic plaques are visible in the coronary artery itself. This can be visualized on a routine CCTA by using perivascular fat attenuation index (FAI) mapping to detect spatial changes in perivascular fat composition induced by the inflamed vascular wall.

The prognostic value of FAI mapping was initially demonstrated in the landmark CRISP-CT study.[1] It showed in an unselected real-world population undergoing CCTA that an abnormal FAI was associated with a six- to nine-fold increased risk of cardiovascular death and a five-fold increased risk of suffering a non-fatal MI. More recent analysis of CRISP-CT, published in JACC, has shown that the predictive power of FAI was independent of high-risk plaque features (HRP).[2] The presence of HRP does not predict increased risk in people who have a low inflammation (normal FAI), whereas people with a high inflammation have a higher risk (abnormal FAI), even in the absence of HRP.

How the Perivascular Fat Index Works

CaRi-Heart is a CT vendor-agnostic, cloud-based software device that calculates FAI, a crude measure of coronary inflammation measured in Hounsfield units, and FAI-score, which corrects FAI for technical, biological and anatomical characteristics, giving the physician a vessel-specific coronary inflammation index.  FAI-score is then incorporated into a risk prediction algorithm, together with clinical risk factors and information extracted from plaque analysis derived from CCTA interpretation, to generate the CaRi-Heart Risk Score, which is the risk for a fatal cardiac event in the next eight years. Studies have shown that up to one third of people have their cardiovascular risk reclassified after a FAI analysis, thereby allowing refinement of treatment strategies to take place.

In the new data analysis presented at ESC 2021, and simultaneously published in Cardiovascular Research, the prognostic output produced by FAI was compared against traditional cardiovascular risk factor-based models.[3] The analysis showed a significant net clinical benefit using CaRi-Heart-based evaluation over and above traditional cardiovascular risk factor-based models in two independent CCTA cohorts. The analysis also showed that the prognostic performance of FAI risk for cardiac mortality was superior to coronary calcium score (CCS) in a head-to-head comparison. The metrics provided by CaRi-Heart also have the advantage of being dynamic in nature, giving physicians the opportunity to monitor an individual patient’s responsiveness to treatments. This is particularly important in patients receiving statins, which are known to increase CCS.

In addition to an improved absolute risk assessment, FAI analysis reports include the FAI-score for each main coronary vessel, an individualized quantification of coronary inflammation adjusted for technical, biological and anatomical characteristics that provides a measure of disease activity. Using the percentile value of the FAI-score provides the patient’s relative risk, compared with people of the same age and gender, and is particularly useful in estimating cardiovascular risk in younger patients, where traditional cardiovascular risk scores are often less helpful.

As stated by the latest ESC cardiovascular disease (CVD) prevention guidelines, “Relative risks may be high in young persons, even if 10-year absolute risks are low, because events usually occur later in life. The relative risk chart, or estimating risk age, may be helpful in identifying and counselling such persons.”

“I’m enthusiastic about a practical method for assessing inflammation in coronary arteries noninvasively in intact humans. Assessment of peri-arterial fat status is very exciting in this respect, including by the Oxford-developed technology,” said Peter Libby, M.D., Mallinckrodt Professor of Medicine at Harvard Medical School and Cardiovascular Specialist at Brigham and Women’s Hospital. 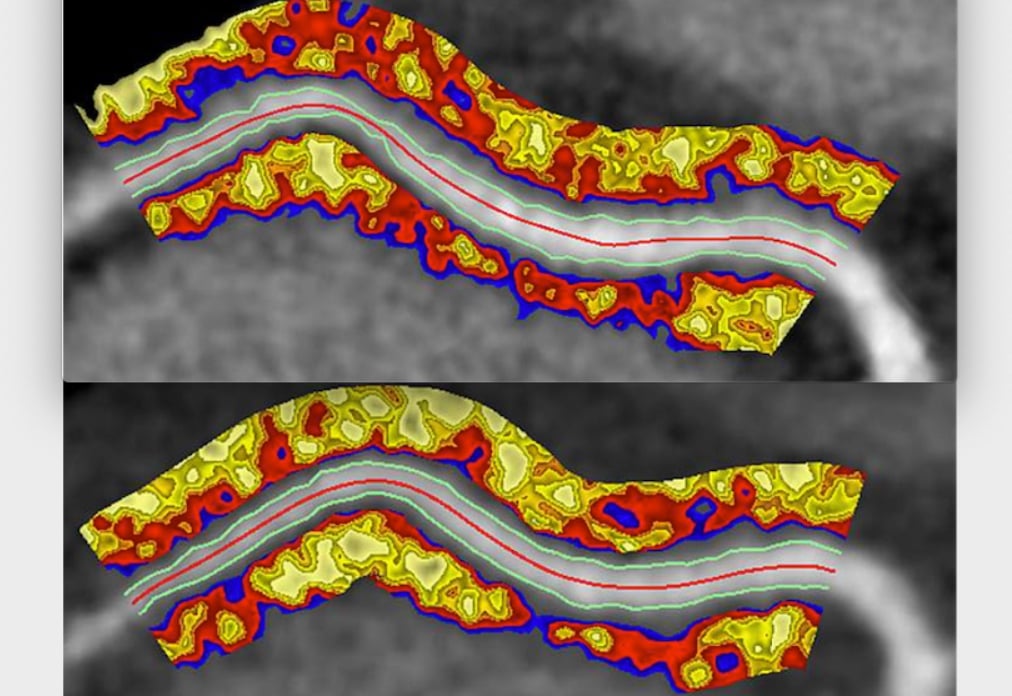 A comparison CT scan of a coronary artery with inflammation before and after one year of taking psoriasis biologic drug therapy. The top image shows areas of red inflammation and the bottom shows a year later with reduced inflammation. This NIH study may pave the way for new ways to risk assess patients using CT and to treat them using existing drug therapies. Image from the Oxford Academic Cardiovascular CT Core Lab and Lab of Inflammation and Cardiometabolic Diseases at NHLBI.