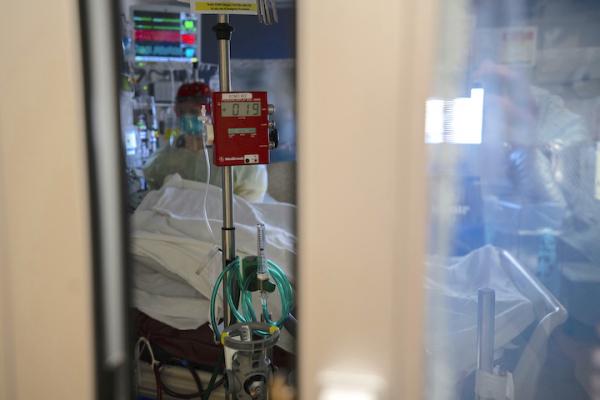 ECMO unit in use to support a severely ill patient at the University of Michigan. ECMO was shown to imporve survival and neuro outcomes in sudden cardiac arrest patients who do not respond to standard therapy.

May 19, 2021 — A subgroup of patients who experienced an out-of-hospital cardiac arrest (OHCA) that did not respond to standard advanced cardiac life support (ACLS), were immediately transported to a cardiac care center and placed on extracorporeal membrane oxygenation (ECMO) were more likely to have survived with good brain function six months later. The outcomes in these patients were better than similar patients who received standard care.

The findings of the late-breaking Prague OHCA Study was presented as a at the American College of Cardiology (ACC) 2021 scientific session.

“This study—the largest randomized clinical trial that has been conducted to address this question—shows that a hyperinvasive approach is a feasible and effective treatment strategy for OHCA,” said Jan Bělohlávek, M.D., PhD, professor of medicine at Charles University in Prague, Czech Republic, and lead author of the study. Although the primary endpoint (six-month survival with good brain function as assessed by a validated scale for measuring cerebral performance after a cardiac arrest) was not met, the trial was stopped prematurely because the hyperinvasive approach showed efficacy in subgroups of patients.

Sudden cardiac arrest occurs when a sudden malfunction of the heart’s electrical system causes the heart to begin beating very erratically, which interrupts blood flow to the heart and brain. According to the Centers for Disease Control and Prevention, about 375,000 people have an OHCA every year in the U.S. The survival rate after an OHCA is about 12%. To survive, the patient must receive immediate cardiopulmonary resuscitation (CPR) to increase blood flow to the heart and brain and an electrical shock from a defibrillator to stop the abnormal heart rhythm.

The study involved 256 patients who experienced a witnessed OHCA. The patients’ median age was 57 years and 92% were men. About 45% had high blood pressure and 20% had a history of coronary artery disease. They were randomly assigned to receive either standard advanced cardiac life support or hyperinvasive support.

Patients in the standard-care group (the S group) were treated at the site where the OHCA occurred with manual CPR, defibrillation, medications to reverse the cardiac arrest and other elements of usual care for a cardiac arrest. Patients in the hyperinvasive group (the H group) received mechanical CPR using a device that provided automatic chest compression and were transported immediately to a cardiac center where — if their heartbeat was not restarted en route — they were placed on an ECMO machine. This machine temporarily takes over the work of the heart and lungs by infusing fresh oxygen into the blood and pumping blood to the body’s organs and tissues.

After six months, 31.5% of patients in the H group and 22% of those in the S group had survived with good brain function, a difference that was not statistically significant. As secondary outcomes, Bělohlávek and his colleagues looked at the proportion of patients in each group who had recovered neurological and cardiac function at 30 days after the OHCA. In the H group, 34.7% had good neurological function at 30 days, compared with 22.7% in the S group, a statistically significant difference. Recovery of cardiac function was similar in the two groups.

The main benefit of the hyperinvasive approach was evident in a subgroup of patients who were resuscitated for more than 45 minutes; 20 patients in the H group survived, compared with six in the S group. Moreover, four of the six survivors in the S group had been crossed over to the H group and had therefore received hyperinvasive rather than standard treatment.

The study’s data safety and monitoring board decided to stop the study after 256 subjects had been enrolled, when it became clear that survival and neurological recovery were superior in the H group, Bělohlávek said. For this reason, the study did not reach its prespecified enrollment target of 570 patients.

Patient survival in the S group, at 22%, was more than twice as high as the researchers had expected. “A byproduct of training the emergency medical teams to conduct the hyperinvasive protocol is that they also achieved extraordinarily good results among patients who received standard [advanced cardiac life support],” Bělohlávek said.

“Timely transport to a hospital and treatment with ECMO should be considered for patients whose hearts do not regain spontaneous activity with standard advanced cardiac life support,” Bělohlávek said. “However, this may be viable only in circumstances where there is absolutely optimal prehospital care, including the ability to have a bystander perform chest compressions at the scene of the arrest with direction via telephone from the emergency dispatch center, and the ability to quickly transport the patient to a dedicated cardiac center where highly trained specialists are available.”

The study was funded by the Ministry of Health of the Czech Republic.