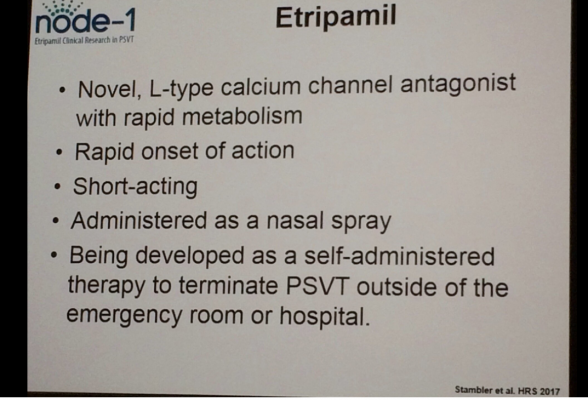 May 16, 2017 – Results of a groundbreaking clinical trial demonstrate the effectiveness of a novel, fast-acting nasal spray therapy called Etripamil to stop a common rapid heart rate condition known as paroxysmal supraventricular tachycardia (PSVT). The multicenter, randomized trial enrolled of 104 patients from more than 35 centers across the U.S. and Canada and the results were presented today at Heart Rhythm 2017, the Heart Rhythm Society’s 38th Annual Scientific Sessions.

PSVT is a rapid heart rate condition that affects approximately 500,000 Americans resulting in more than 50,000 hospital visits every year. In order to restore normal heart rhythm, patients are often treated with adenosine, calcium channel blockers or beta-blockers, which must be administered through an IV in a hospital or monitored setting. There are no existing therapy options that can be administered by a patient at their home or without the presence of a trained medical professional. Etripamil, made by Milestone Pharmaceuticals, is a novel, potent, short-acting calcium channel blocker and is being developed as a fast-acting nasal spray that can be administered by the patient to acutely terminate PSVT episodes wherever and whenever they occur.

The NODE-1 Trial is a phase two, multicenter, randomized, parallel-group, double-blind placebo-controlled study designed to evaluate the efficacy of different doses of Etripamil in terminating PSVT. The study included 104 patients that were randomized and received the drug in an electrophysiology (EP) lab setting. Following a 5-minute induced atrioventricular re-entry tachycardia (AVRT) or atrioventricular nodal reentrant tachycardia (AVNRT), types of PSVT, patients received a placebo or one of four doses of Etripamil at 35 milligrams (mg), 70 mg, 105 mg or 140 mg. The primary endpoint was the termination rate of PSVT within 15 minutes of study drug administration.

Etripamil at doses of 70 mg, 105 mg and 140 mg yielded conversion rates of 87%, 75% and 95%, respectively that were all significantly better than the 35% conversion rate in the placebo group. The mean conversion time ranged from 2.60 minutes to 3.37 minutes in the Etripamil groups. Times were faster with patients given higher doses. The most common adverse event that occurred to patients who used the Etripamil therapy was transient nasal congestion or irritation.

“This study introduces a completely novel therapy that has never been used before, and has the potential to alter how we treat patients with PSVT,” said lead author Bruce Stambler, M.D., a cardiac electrophysiologist at Piedmont Heart Institute in Atlanta, Ga. “Many patients who suffer from PSVT can experience sudden episodes anytime and anywhere. This fast-acting nasal spray therapy could give patients the convenience to self-administer treatment no matter the location and without having to go to the hospital.”

The authors of this study call for further assessment to test Etripamil in a “real-world” situation of patient self-administration outside of the hospital environment.