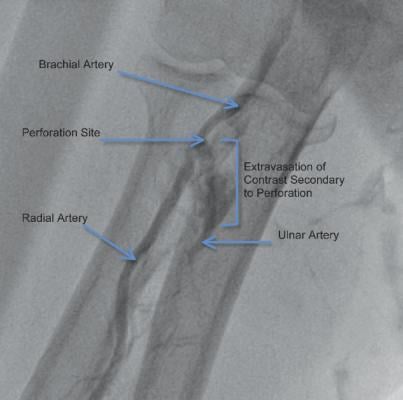 The radial artery approach is exceptionally well-suited for diagnostic angiography and, with a lower incidence of bleeding complications, is a favorable alternative for femoral percutaneous coronary intervention (PCI). The most common complications with the transradial approach are asymptomatic radial artery occlusion (3-5 percent) and radial artery perforation (less than 1 percent).

Here, we will describe a case of a planned intervention using the transradial approach that was complicated by a perforation of the radial artery. We will discuss various management options available when dealing with this complication.

A 62-year-old female presented to clinic with typical angina, and myocardial perfusion imaging demonstrated anterior and antero-lateral ischemia. Coronary angiogram revealed an ostial 50 percent lesion of the left main stem that was confirmed with intravascular ultrasound (IVUS). Surgical revascularization was recommended, but the patient opted for PCI.

Our strategy for the procedure was access via the right radial artery with the use of a 10 cm 6 French radial-specific hydrophilic sheath. A radial-specific sheath provides the smoothest transition from wire to sheath, and its tapered dilator is critical to ease sheath placement with minimal discomfort to the patient. Hydrophilic-coated sheaths facilitate sheath insertion and decrease radial artery spasm. A drug-eluting stent would be deployed with bivalirudin used as our anticoagulant. Post-PCI IVUS would be performed, and dual antiplatelet therapy would consist of aspirin and clopidogrel.

The procedure began with an uncomplicated front wall puncture of the right radial artery. A straight 0.021-inch wire was advanced into the forearm without resistance. A 6 French hydrophilic sheath was then inserted into the radial artery with no excessive manipulation required. The patient did not report pain or discomfort. Intra-arterial nitroglycerin (200 mcg) and diltiazem (200 mcg) were given as anti-spasmodic agents and bivalirudin was started with an IV bolus of 0.75 mg/kg followed by an IV infusion at 1.75 mg/kg/hr. The 6 French guiding catheter, over a standard, non-hydrophilic 0.035-inch J-tip wire, was inserted.

Resistance to wire passage was observed at the level of the radio-humeral joint, and at that time the patient also reported pain. The wire could not be advanced further and the guiding catheter and wire were both withdrawn. Selective radial artery angiography was performed, revealing perforation of the radial artery at the bifurcation with the brachial artery (Image 1).

Immediately, an attempt was made to cross the site of the perforation with a 0.014-inch coronary wire, but this was unsuccessful. The bivalirudin infusion was discontinued. At that time, the ACT was measured at 350 seconds, the radial artery sheath was removed and a radial artery occlusion device applied. To aid in hemostasis at the perforation site, a blood pressure cuff was placed over the perforation site and inflated to 20 mmHg below systolic blood pressure. An interpretable waveform or saturation reading could not be obtained from pulse oximetry. The patient continued to develop further neurovascular compromise with decreased sensation in her fingers and loss of capillary refill. With an expanding hematoma developing along the patient’s forearm along with symptoms of severe pain, an emergent vascular surgery consultation was made. The patient was taken to the operating room for a right forearm fasciotomy, mechanical thrombectomy and vein patch angioplasty of the radial artery.

The patient was discharged from the hospital four days later and made an uncomplicated recovery with the development of only a small forearm scar. Two months later she underwent uncomplicated PCI, with stent insertion, to the left main coronary artery via the femoral approach.

Operators performing transradial artery diagnostic or interventional procedures must be familiar with recognizing and managing complications specific to this access site. Early recognition of a perforation is crucial and reported symptoms and/or difficulty in manipulating the equipment should immediately alert the operator to this rare, but serious, complication. As is true for any transcatheter procedure, one should never force a guidewire or catheter, and also have a low threshold for radial artery angiography to identify anatomical abnormalities.

This case nicely illustrates the importance of anticoagulation choices for transradial procedures. Although in radial PCI the type of anticoagulation appears to have little or no impact on access site-related bleeding, the timing of anticoagulation administration is critically important. In this case, the operator chose to administer bivalirudin, an anticoagulant without an available reversal drug, prior to engaging the coronary arteries with the guiding catheter. Radial artery perforation occurred at the time of the sheath insertion and was likely caused by the straight 0.021-inch wire. Had the perforation been diagnosed prior to administration of bivalirudin, it is conceivable that the outcome would have been more favorable. Alternatively, had heparin been administered prior to guide advancement, in this scenario, protamine reversal might have been helpful in reducing the extent of the hematoma expansion.

Typically, when a radial artery perforation is diagnosed, an attempt to pass a coronary wire (0.014-inch hydrophilic or non-hydrophilic) can be made and, if successful, the guiding catheter can be advanced and left in place to seal the perforation. Often, the planned procedure can be continued with careful, repeated monitoring of signs or symptoms of the perforation, including   physical examination of the perforation site. In this case, a 0.014-inch coronary wire could not cross the lesion, therefore the option of sealing the lesion with a guiding catheter was not available.

Other Options to Achieve Perforation Hemostasis

Other recommended options include recrossing the radial artery from the contra-lateral side and occluding the vessel temporarily with a balloon until hemostasis is achieved. Experienced interventionists have been successful in managing a perforation using this technique but have recommended recrossing the radial artery using the femoral approach, as opposed to contra-lateral radial access, since this can be an easier and faster technique.

Tizon-Marcos et al. have proposed a method using a blood pressure cuff inflated over the site of the perforation to achieve hemostasis (Table 1). Another important aspect of management of this complication is to seek urgent advice from the vascular surgery team if neurovascular signs or symptoms develop.

In summary, this case demonstrates that it is imperative to administer anticoagulation after engaging the coronary arteries. This can “make or break” a case.

• Consider protamine, if heparin in use

• If persistence of swelling, pain or induration
after two inflations of 15 minutes, consider
urgent surgical consultation