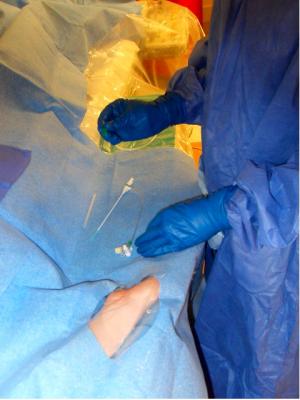 (Watch an  October 2019 update on this article with radial adoption rates nearing 50 percent in the U.S. in the VIDEO: Trends in Radial Access for Percutaneous Coronary Interventions)

The use of transradial artery vascular access for percutaneous coronary intervention (PCI) in the United States has seen a rapid rise in the past few years. However, it still only accounts for around 27 percent of PCIs, with the majority still being performed using traditional femoral artery access. While use of radial access has been shown to help lower bleeding and other access site complications, experts say there are still some barriers to its wider U.S. adoption.

“I think there has been a dramatic adoption of radial access in the U.S.,” said Sunil Rao, M.D., associate professor of medicine and a member of the Duke University Clinical Research Institute. He is one of the leading U.S. proponents of radial access.

Rao has conducted research studies into U.S. radial adoption rates. The first study he conducted, using American College of Cardiology (ACC) National Cardiovascular Data Registry (NCDR) CathPCI Registry data from 2004-2007, showed radial was only used in about 1.32 percent of PCI cases. This translated into about 7,804 out of 593,094 cath lab patients in the United States during the study period.[1]

“It has continued to climb, but it also tells us we have a tremendous opportunity to educate physicians and cath lab teams about the benefits of using radial access,” Rao said. “I think we are going to continue to see the use of radial access grow. There are a lot of fellows now training in the use of radial and are getting jobs specifically because of their expertise in radial. Ultimately we will all be replaced, and they will really be the ones who will continue to push it forward.”

The need for access to radial education programs is one of the key factors in being able to expand radial usage, Rao said. This was cited in a study of 200 interventional cardiologists a few years ago who were asked what the barriers to radial were. “We found some very interesting trends,” he said. “A lot was centered around the lack of training opportunities, so when physicians are out in practice and they want to adopt radial access, how can we bring that training to them.”

Institutional support was another key factor in that survey for the lack of adoption. Rao said a value proposition case needs to be made for why a hospital should create a radial program.

“Lastly, some physicians [in the survey] just did not believe the data,” Rao said. “I think we have largely overcome that third barrier, because the data has been very consistent, whether you look at small observational studies or large randomized trials, so that leaves the other two things that we need to address.”

Rao said the need for training is being addressed, with both the Cardiovascular Research Foundation (CRF) and the Society for Cardiovascular Angiography and Interventions (SCAI) initiating strong transradial access training programs. He noted vendors and the industry also offer a lot of opportunities today that were not available a few years ago.

“And when I talk about training, I am not just talking about physicians, it also needs to include nurses and cath lab staff,” Rao said.

Value of Radial Programs for Institutions

“In a cost-conscious environment, institutions are looking for ways to create value,” Rao explained. “Remember, value is healthcare outcomes per dollar spent, and I think in that equation, radial access is very attractive and we are seeing a lot more impetus to adopt radial right now.”

“It’s pretty clear that changing to radial access does have a significant impact on reducing bleeding complications,” Rao said. “What does that mean in terms of dollars and cents? We know that there is an association between these PCI-related complications and an increased length of stay and an increased cost. That is the easy, low-hanging fruit.”

“In an era when the majority of PCI procedures are being billed as outpatient procedures, the way to realize profit margins is by reducing costs. And, you reduce cost by adopting strategies that are more efficient and safer. So in that context, radial makes a lot of sense,” he said.

For hospitals that are referral centers, they want to open up beds for people who really need them, like heart failure and left ventricular assist device (LVAD) patients or others with critical conditions. “You don’t want people post-PCI who are very stable and could be going home sitting in that bed overnight,” Rao explained.

Today, many centers are also working toward same-day discharge PCI programs, and radial access can play a role.

“Same-day discharge programs is not solely a radial approach, the studies that have been done in the United States, many have been looking at femoral access and use of rapid hemostasis, whether that is with use of a vascular closure device or manual compression,” Rao explained. “However, radial access certainly does help facilitate rapid hemostasis so the process is much, much faster.”

Investments to Start a Radial Program

Rao said cath labs looking to start a radial program do need to make a modest investment up front to purchase radial-specific supplies, including sheaths and radial access site hemostasis bands. Staff training is another consideration, but he pointed out many radial training programs today are free.

Radial Use in STEMI

A 2012 study found the use of transradial PCI in patients with ST-elevation myocardial infarction (STEMI) also is on the rise in the United States.[3] Compared with the femoral approach, radial access was also found to be associated with reduced bleeding and in-hospital mortality. Rao led researchers in analyzing data from 90,819 STEMI patients treated at 541 centers in the NCDR CathPCI Registry who underwent PCI for between 2007 and 2011. A total of 6,159 patients (6.8 percent) within this cohort were treated using transradial access, with the proportion varying from 0.2 to 76.6 percent depending on the hospital.

The study found the average door-to-balloon times, 78 vs. 74 minutes, and fluoroscopy times of 12.8 vs. 10.4 minutes, were both higher for radial access. But, the data also show contrast volume was lower with radial (180 vs. 185 mL), as were vascular complications requiring treatment (0.13 vs. 0.49 percent).

Rao tracks international transradial usage statistics to compare U.S. rates. In the United Kingdom, he said transradial was used in about 50 percent of PCI cases around 2011, and today that number is closer to 70 percent. France has a radial access usage rate of about 80 percent. Several Asian countries such as Japan have similarly high rates, he said.

“It’s hard to get accurate numbers for some countries, because not all of them have national registries. But, where we do have data, it shows that the U.S. is one of the few countries that lags behind in terms of its use of radial access,” Rao said.

Rao speculates radial adoption rates have a lot to do with individual provider volumes. There are a large number of U.S. operators, which translates into lower procedural volumes for most. However, in many other countries with fewer providers, their volume is much higher.

“If you are not doing that many cases, there may not be any incentive to change what you are doing,” Rao explained, pointing to U.S. operators as an example. “However, if you are in a country that only has a handful of PCI operators and each operator has a very high volume, that may motivate you to adopt new strategies to increase throughput, just because you have to get through the day and get through all those patients.”