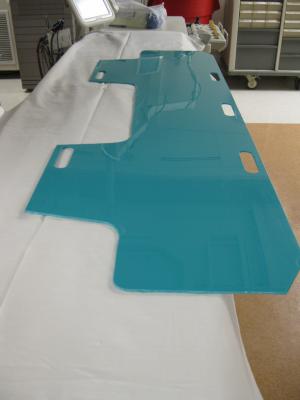 The cath lab table, along with a slide board, provides more surface area to work during radial procedures. UIC and the Jesse Brown VA Medical Center both use a slide board they modified in-house with a saw.

The femoral artery approach for cardiac catheterizations has been used as the gold-standard in the United States, but there is growing interest in the transradial approach. One of the main advantages of radial access is increased safety with fewer bleeding complications. The preparation for radial access differs significantly from femoral access, so the following suggestions are offered based on the experience of the cath labs at both the University of Illinois Medical Center and the Jesse Brown VA Medical Center in Chicago.

Prior to a transradial catheterization, the patient should be screened for the following:
• Abnormal Allen’s test
• Planned use of the intra-aortic balloon pump
• Upper extremity vascular disease, such as subclavian stenosis and fistulas
• Buergers, Raynauds disease
• Dialysis access planned
• Caution action site with bypass grafts
• Interventions requiring 7 French in females and 8 French in males. The mean radial artery size in men is 3.1 mm and women 2.8 mm.

Patient preparation for a transradial catheterization is a considerable part of the procedure. The patient must be adequately educated and prepped. This will allow the patient to make an informed decision regarding the procedure and allow enhanced cooperation during the event. Patients should be informed about the limitation of movement of their hand and wrist during the procedure. The immobilization should be explained as a safety measure. Also, the patient should be educated on the use of sedation medications and the initial discomfort related to the local Lidocaine injection and sheath introduction. If the patient feels any discomfort in the forearm, they should be instructed to inform the healthcare team and they need to evaluate the cause of the pain.

Prior to the procedure, in a same day surgery unit or pre-cath preparation unit, the patient should have an IV started in the contra-lateral arm of the access site. If the right radial artery is to be cannulated, the IV should be started in the left hand or arm. This allows for free access to the right wrist/arm for the radial artery access. If for some reason the left arm cannot be utilized for intravenous access, the staff should take special precautions to start the IV away from the radial access site or around the wrist area.

Hair is removed from the access site area, usually on the right wrist. In many institutions the left wrist and groin areas are also prepared as alternative access sites.

One of the most important clinical assessments is the evaluation of the radial and ulnar artery circulation. The collateral circulation to the hand can be tested by the following methods:

Allen’s Test: To perform this test, occlude the right radial artery for several minutes and compare both hands’ color. The access hand has adequate collateral circulation through the ulnar artery if there is no difference in hand color. Release the right radial artery and then occlude the right ulnar artery. Again assess the compressed hand’s color in comparison. If there is a color change with ulnar circulation, this is said to be a “positive” Allen’s test and a contraindication to a radial artery puncture. The limitation to this test includes an assessment of color change and the use of the wording “positive” vs. “negative” Allen’s test, which is confusing terminology for the team.

Modified Allen’s Test: The patient should elevate their hand and clench his fist. Occlusive pressure is applied over the right radial and ulnar arteries simultaneously. Have the patient then relax his hand and you should note blanching of the palm and fingers. Release the occlusive pressure on the ulnar artery and you should notice a “pinking/flushing” up of the hand within five to 10 seconds. When you see the pinking/flushing of the hand, the hand has adequate ulnar artery flow. This is considered a “positive” modified Allen’s test. If the color does not return within eight seconds, then the ulnar circulation is insufficient and the radial artery should not be used.

Plethysmography: A pulse oximeter probe is placed on the first finger or thumb of the hand where access is to be obtained. A waveform should be noted on the monitor and a saturation number should be recorded. The radial and ulnar arteries are occluded and the waveform should be dampened. The ulnar artery should be released with a return of the waveform and an oximetric reading recorded. The occlusive oximetric reading should be within three points of the baseline saturation reading. This is a “normal” Allen’s test.

If the waveform remains dampened after the ulnar artery is released and the occlusive oximetric reading is more than three points lower than the baseline, the test is considered “abnormal,” thus the radial artery should not be punctured. The advantage of this test is there is objective documentation of oximetric blood flow with the waveform assessment and objective saturation numbers are obtained. This is the standard of care that should be assessed prior to arterial puncture.

Objective waveforms should be visualized and oximetric readings charted. The radial pulse quality should be rated both before and after the procedure. The character of the pulse is usually noted on a three-point scale. A Doppled pulse indicates the use of a Doppler to locate the artery site; +1 indicates a weak and thready pulse; +2 is a normal, easy to palpate pulse; +3 is a bounding pulse. The radial pulse should have a similar character before and after the cardiac event. Distal finger color, temperature, sensation and oxygen saturation reading should be assessed pre- and post-procedure and documented.

In preparing for a radial catheterization, appropriate lab equipment facilitates the ease of the procedure. A big enhancement is an extension of the cath lab table to provide more surface area to work. This can be accomplished by the use of a slide board.

The patient’s arm should be supported on the table and should remain as close to the body as possible. This will reduce radiation exposure to the operators and provide a more comfortable position for the patient. The first finger or thumb of the access site must have an oximetric probe attached. A natural fall of the wrist may be accomplished with the use of a cushion device that will allow for the hyperextension of the wrist and provide a cushion for the elbow. The hand/fingers may be secured to prevent pronation of the hand with the needle stick.

The wrist area is prepped following sterile technique with a standard antiseptic scrub solution. The wrist should be prepped from the upper palm to the right and left lateral points, to five-finger breadths above the radial artery pulsation.

A special transradial drape may be utilized that allows for radial and femoral access in a single drape. This is superior to lapping drapes for there is no break in the sterile field. A single drape can be used for either access site. The drape over the site should be clear for visualization of the surrounding area and occlusive to the prepping points noted above.

Understanding the anatomy of the radial access points, the preparation of the client and the room will provide for a smoother transition for the team from a primary femoral lab to a transradial lab.

Editor's note: Bernadette Speiser, RN, MSN, CCRN, is the cardiology department manager at the cardiac catheterization lab at the Jesse Brown VA Medical Center in Chicago. She can be reached at [email protected]