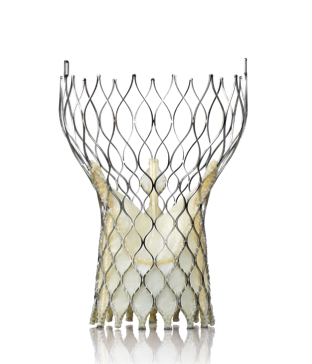 October 30, 2013 — The first results from the CoreValve U.S. pivotal trial, the first U.S. data presented on the Medtronic CoreValve system, were very positive. The data on the self-expanding transcatheter aortic valve replacement (TAVR) device were presented as a late-breaking clinical trial session of the 25th annual Transcatheter Cardiovascular Therapeutics (TCT) conference. The trial met its primary endpoint in patients who were considered too ill or frail to have their aortic valves replaced through traditional open-heart surgery, with a rate of death or major stroke at one year of 25.5 percent. This result is highly significant (p < 0.0001) as it was 40.7 percent lower in patients treated with the CoreValve system than was expected with standard therapy (a pre-specified performance goal of 43 percent).

At one month, the major stroke rate was 2.4 percent, and it remained low over time with a one-year rate of 4.1 percent. Of the 487 patients enrolled in the study, 471 had an attempted implantation and were designated as the primary "as treated" analysis population. Patients were elderly (83.1 years), and were severely symptomatic (NYHA class III or IV, 91.9 percent). The Society for Thoracic Surgery Predicted Risk of Mortality was 10.3 percent ± 5.6 percent and was > 15 percent in 17.6 percent of patients.

“The fact that nearly three-quarters of patients were alive and free of strokes at one year is remarkable, given the complex medical conditions and extreme frailty of this population,” said Jeffrey Popma, M.D., director of interventional cardiology, Beth Israel Deaconess Medical Center, Boston, co-principal investigator and presenter of the trial at TCT. “Not only do the results meet the CoreValve study’s safety and efficacy endpoints for patients at extreme risk for surgery, but the positive clinical outcomes and low complication rates set a high standard for what transcatheter valves can achieve.”

The device also performed as well or better that the Edwards Lifesciences Sapien valve, which is currently the only U.S. Food and Drug Administration (FDA)-cleared TAVR device in the United States. One-year data from Sapien's PARTNER pivotal FDA trial showed a stroke rate of 6 percent, compared to surgical valve replacement with only 3.2 percent. The higher stroke rate has been the main concern for TAVR, but CoreValve's one-year stroke rate was 4.1 percent, which has caught the attention of market analysts and physicians.

The all-cause mortality rates were comparable, with Sapien at 24.3 percent, CoreValve at 25.5 percent and to surgical valve repair at 26.8

CoreValve Improved Quality of Life
The study also found significant and sustained functional and quality-of-life improvements, with the heart failure symptoms of most patients (90 percent) improving at least one class at one year (as measured by NYHA classification), and quality-of-life scores improving 27.4 points at one year (as measured by the Kansas City Cardiomyopathy Questionnaire (KCCQ) 100-point scale, in which a 20-point change is considered highly significant).

Overall hemodynamic performance was strong with mean gradients of 8.5 mmHg at one month and 8.8 mmHg at one year, similar to gold standard surgical valves. Paravalvular leak (PVL) rates were low and improved over time with only 11.5 percent of patients having more than mild PVL at one month, which improved to only 4.1 percent at one year. Notably, more than 80 percent of patients with moderate PVL at one month had a reduction in the severity of PVL by one year, an improvement that has not been reported in other major transcatheter aortic valve replacement (TAVR) trials. Furthermore, CoreValve patients with moderate PVL had no greater mortality risk than patients with less PVL.

“In the recent past, these patients had no good treatment option and a 50 percent chance of death at one year,” said John Liddicoat, M.D., senior vice president of Medtronic and president of Medtronic's structural heart business. “Along with the clinical community, we are very encouraged by the results in this rigorously conducted trial and look forward to continuing our effort to bring this transformational therapy to patients with life-threatening aortic valve disease in the United States. In particular we wish to commend the 40 enrolling sites and their heart teams for their exceptional commitment to patients and for the meticulous conduct of this trial.”

In the study, 471 patients were treated with the CoreValve system, a self-expanding, low 18 French profile system with three valve sizes (26, 29 and 31 mm) delivered via the femoral artery. Patients were monitored by independent core labs and evaluated against a performance goal developed in partnership with the FDA. In the CoreValve Continued Access Study, 830 extreme-risk patients have been treated with CoreValve system.

Medtronic has three FDA IDE trials evaluating the Corevalve for high-risk, extreme-risk and  intermediate-risk surgical patients (SURTAVI Trial). The FDA has determined it will conduct separate reviews for the trial’s extreme-risk and high-risk studies. Upon reviewing the CoreValve trial’s results for extreme-risk patients, the FDA determined it has sufficient information to evaluate the safety and efficacy of the Medtronic CoreValve system for this patient group without the need for an external expert panel.

Medtronic anticipates receiving FDA approval of CoreValve system for extreme-risk patients by the end year 2014. It is widely expected the CoreValve will become the second TAVR device to achieve FDA clearance.

The Rocky Road Ahead

As with the "stent wars" in the late 1990s through the past decade where key stent vendors were involved in extensive patent litigation and counter suits to block competition, the same is already happening in Europe with TAVI devices and it is expected to spill over into the U.S. market.

In September, a German injunction against sales of Medtronic's CoreValve went into effect, the result of a patent challenge by Edwards Lifesciences. The District Court of Mannheim ruled that Medtronic is infringing Edwards' Spenser patent for transcatheter heart valve technology and issued an injunction prohibiting the sale of CoreValve and CoreValve Evolut systems in Germany, and ordered a recall of these products
Since receiving CE mark in 2007, the CoreValve system has been implanted in more than 45,000 patients in more than 60 countries.
New Directions
In October, Medtronic announced the first European implants in the CoreValve Evolut R clinical study, which will evaluate the safety and effectiveness of the CoreValve Evolut R recapturable system. This recapture-enabled valve and delivery system is designed to advance deliverability and valve performance while providing the option to recapture and reposition the CoreValve Evolut R valve during deployment, if needed, while performing TAVR.