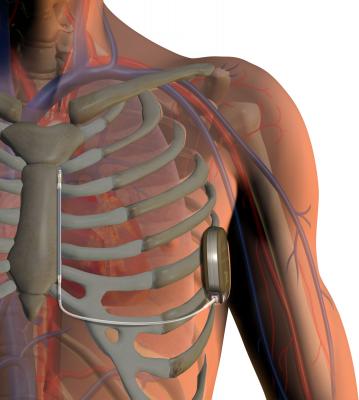 May 22, 2014 — A study presented at Heart Rhythm 2014, the Heart Rhythm Society’s 35th Annual Scientific Sessions, reports significant gender and health insurance disparities in implantable cardioverter defibrillator (ICD) procedures. For the first time in nearly a decade, the new analysis of ICD implants in the United States shows a majority of implants are performed on people with insurance and more commonly in the male population.

ICDs are small devices, about the size of a small cell phone, that are placed below the collarbone. Via wires or leads, these devices continuously monitor the heart’s rhythm. If the heart beats too quickly or too slowly, the ICD issues a jolt of electricity to restore the heart’s normal rhythm. People with heart muscle damage or “heart failure” have greater chance of having a dangerously fast heart rhythm that ICDs treat. ICDs are very effective in stopping life-threatening arrhythmias and considered one of the most successful therapies to treat arrhythmias.

The authors of the study queried data from the National Inpatient Sample from 2000-2011 using ICD-9 procedure codes for ICD implantation. ICD utilization was assessed in the following four groups: male insured, male uninsured, female insured and female uninsured. More than 160,000 (160,296) estimated ICD implants were identified in people over the age of 18. Almost all (95 percent) of the ICD implants identified were performed in the insured population. The male population with insurance (70.8 percent) had significantly higher implants compared with the female population with insurance (24.2 percent). Only 5 percent of the procedures were performed on people who did not have insurance.

“The striking results show that major disparities are present with ICD implants and this further highlights the importance of adhering to guidelines, so best possible candidates have access to the life saving device,” said lead author Nileshkumar Patel, MBBS, Staten Island University Hospital in New York. “We are presented with the challenge to look for new ways to enhance the quality of care and continue to educate on the safety and effectiveness of these devices.”

Abhishek Deshmukh, co-author of the study, cardiologist at University of Arkansas for Medical Sciences added, “On the surface, efforts are made toward the mitigation of disparities, but closer examination shows that there is still more work to be done especially in current challenging healthcare landscape.”