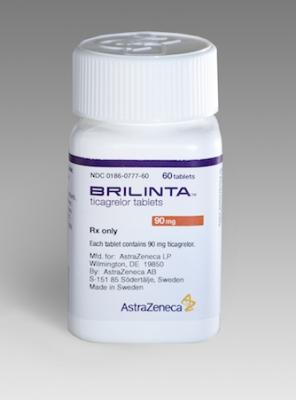 Ticagrelor is the newest agent on the market. It has a different chemical structure than clopidogrel, so it has no cross sensitivity with other drugs in the class. It has a rapid absorption, faster onset than clopidogrel and is more potent.

The standard-of-care for dual antiplatelet therapy (DAPT) for more than a decade has been clopidogrel (Plavix) plus aspirin. This standard is now being challenged by new agents — ticagrelor (Brilinta) and prasugrel (Effient). While the new agents are more effective at preventing platelet aggregation than clopidogrel, each has unique characteristics. Plavix went generic earlier this year, which may also impact decisions about which therapies to use.

“Physicians should be thrilled to bring these medications to patients today,” said Kirk Garratt, M.D., MSc, director of clinical research at Lenox Hill Heart and Vascular Institute of New York. “It is easy to lose sight that we are doing an incredible job for patients who have, or are at risk of having, a myocardial infarction or stroke, and it is due in part to these effective medication options.”

However, physicians have not rushed to switch to the newer agents, partly because they are already familiar with clopidogrel. Some cardiologists are using the newer, more potent agents for the first 30 days after percutaneous coronary interventions (PCI) or an acute coronary syndrome (ACS), but then switch to clopidogrel.

A major issue with clopidogrel is that one-third of patients are nonresponders because they lack the enzymes to metabolize it. While nonresponders can be identified with testing, this adds cost. So with the introduction of the newer drugs, which are metabolized differently, some hospitals and physicians are opting for ticagrelor or prasugrel.

This article summarizes details on each agent and briefly reviews their clinical data.

Clopidogrel is an irreversible, P2Y12 receptor antagonist that prevents signal transduction and platelet activation. It has been on the market since 1997 and became available in generic form as of May 2012.

Clopidogrel must be metabolized by CYP450 enzymes to produce the active metabolite that inhibits platelet aggregation. CYP2C19 is involved in the formation of the active metabolite required for antiplatelet effects. Variations in CYP2C19 genotype can lead to poor CYP2C19 variations and poor antiplatelet response.  The ADAPT trial looked at ADP platelet response and the CYP2C19 gene. It suggested that poor response in heterozygote patients could be overcome by increasing the clopidogrel dose.  The U.S. Food and Drug Administration (FDA) has created a black box warning about the diminished response in poor metabolizers.

Cigarette smoking induces CYP1A2 activity, which may increase concentrations of the active metabolite of clopidogrel. Known as the “smokers paradox,” it was shown in the CREDO, CLARITY, CURE and CHARISMA trials.

Proton pump inhibitors (PPIs), omeprazole and esomeprazole, should be avoided with clopidogrel. These PPIs significantly reduce the drug’s antiplatelet activity due to CYP2C19 inhibitory effects. When a PPI is required, consider using another acid-reducing agent with minimal or no CYP2C19 inhibitory effects. Some experts say the data to support clinical drug-drug interaction with PPI at best is shaky because there is only one trial on this interaction. However, that was evidence enough for the FDA, which requires a black box warning to discuss PPI interactions with patients.

The CURE trial looked at clopidogrel vs. placebo in PCI patients and found a 31 percent relative risk reduction.  The DAPT trial compared clopidogrel to ticagrelor and found they were about the same for bleeding risk.

With clopidogrel going generic, it may seem reasonable to prescribe the generic versions to reduce costs. However, according to Garratt, generic products are not all made the same way as brand names. While generics are supposed to work the same, they tend to be a little different. He said this is OK for drugs that reduce stomach acid, but these drugs are given to reduce serious life-threatening events. There is no guarantee that a generic form of the drug will work as well as the brand name for every patient. Garratt said ticagrelor and prasugrel have already been shown to be superior to brand clopidogrel and wonders if they are even more superior to some of the generic forms. From a cost analysis perspective, he said, “The more expensive drug is the one that does not work,” if it puts the patient at increased risk of stroke, myocardial infarction (MI) or death.

Ticagrelor is a reversible nonthienopyridine P2Y12 receptor antagonist that prevents signal transduction and platelet activation. It is the newest player on the market (approved in July 2011) and only recently began getting endorsements in guidelines during 2012 revisions.

Ticagrelor has a different chemical structure than clopidogrel, so it has no cross sensitivity with other drugs in the class. It has a rapid absorption and is metabolized by CYP450 enzymes 3A4 to an active metabolite with 30–40 percent of activity. It has a faster onset than clopidogrel and is more potent.

The agent is contra-indicated in moderate to severe hepatic impairment and in intracranial hemorrhage. The drug carries a black box warning from the FDA about its increased bleeding risk and it should not be used in patients with active bleeding disorders or a history of intracranial hemorrhage.  Therapy should not be initiated in patients undergoing urgent coronary artery bypass graft (CABG) surgery and should be discontinued five days prior to any surgery.

A study showed that maintenance doses of aspirin above 100 mg reduce the effectiveness of ticagrelor. The OASIS 7 trial suggests that 81 mg of aspirin was not different from 325 mg for stroke prevention effects. This resulted in a change from 325 mg dosing of aspirin to 81 mg in PCI patients.

Garratt is concerned with ticagrelor’s odd interaction with high-dose aspirin, where the benefit of ticagrelor goes away. Studies have shown patients still take 325 mg of aspirin despite being told to take 81 mg.  This could occur for many reasons, such as the patient’s level of understanding or cost issues.

It has a Class IB recommendation in the new American College of Cardiology 2011 guidelines.

The PLATO trial looked at subgroups of diabetic patients, who were found to have an increased benefit from ticagrelor. In diabetic mellitus patients, benefits were so high that they may outweigh bleeding risks, even in the elderly.

Garratt said from his experience ticagrelor has a side effect where the patient feels shortness of breath.

Prasugrel is a thienopyridine, which irreversibly binds to adenosine diphosphate receptors on platelets and causes inhibition of platelet aggregation. Garratt said in trials, prasugrel had more predictable outcomes than clopidogrel and had better outcomes in death, nonlethal MI and stroke.

Prasugrel has a more rapid onset of 15 minutes and better response with less variation than clopidogrel. There is more consistency with dosing due to lack of genetic variation effects of poor metabolizers. Also, prasugrel has no drug-drug interactions with 3A4 or p-glycoprotein. For example, there is no change in efficacy with PPIs. However, an increase in serum creatine may lead to some drug-drug interactions since this could decrease tubular secretion, which is a route of elimination for prasugrel.

An advantage of prasugrel over ticagrelor is its once-daily dose, as compared to a twice-daily dose for ticagrelor, which Garrett said could lead to a compliance issue.

The pivotal TRITON-TIMI 38 trial suggested a greater benefit from prasugrel than clopidogrel for ACS patients. Prasugrel reduced the rate of MI from spontaneous stent thrombosis. When looking at subgroups, the study showed that diabetic patients might benefit more from prasugrel.

Occurrences of MI, stroke and death in ST-elevated myocardial infarction (STEMI) patients were less with prasugrel, but there was an increase in bleeding. Lower body weight, elderly age and prior stroke history places a patient at increased bleeding risk.

The FDA has a black box warning on prasugrel due to its increased bleeding risk.

“I don’t think there is a free lunch,” explained Sarah Spinler, PharmD, FCCP, FAHA, FASHP, BCPS (AQ cardiology), professor of clinical pharmacy, University of the Sciences in Philadelphia. Speaking at a pharmacology session at ACC 2012, she said the newer agents offer much better antiplatelet effect, but while patients have better protection from MI, their risk of bleeding also increases.

During an ACC 2012 panel discussion on cardiac pharmacology, participants said caution is needed when switching patients’ therapies. One real-world case cited was a patient known to be a clopidogrel nonresponder, who was switched to a new agent. The newer agent carries a higher bleeding risk, and that was shown when the patient suffered an intercranial hemorrhage soon after being put on the new drug.