Trends and recent advances in stents for peripheral artery disease 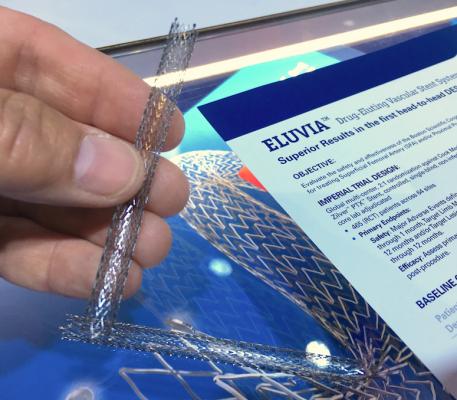 In recent years, there has been a lot of focus by vendors on developing better stenting technologies to treat peripheral artery disease (PAD). Part of this has been fueled by the rising numbers of peripheral interventional procedures for PAD, critical limb ischemia (CLI, also called chronic limb-threatening ischemia) and limb salvage to prevent amputation. But new technology development also has been spurred by the need to reduce extremely high restenosis rates.

The Peripheral Anatomy is Hostile to Stenting

Unlike the coronary arteries that are protected by the rib cage from outside pressures and blunt trauma, the arteries in the legs are not. The Illiac, femoropopliteal and intrapopliteal arteries above the knee, and the tibial, peroneal and dorsalis pedis arteries below the knee are all exposed to twisting, bending and crushing pressures from outside the body, and from muscles in the legs due to normal body movement. These heavy pressures and torsion forces can break or crush the stent struts of conventional, rigid coronary stents, so flexible, self-expanding stents have been developed to survive in this environment.

Additionally, peripheral arteries also have very high rates of restenosis, which often leads to the strategy of revascularizing patients with the expectation that many will return for repeat procedures. For stents to be successful in this anatomy, they need to show lower restenosis rates in clinical trials.

Due to high rates of restenosis, the need to preserve options for future revascularization and issues with stents in this anatomy, much focus has been put into the development of specialized peripheral balloon angioplasty devices. This includes the development of new atherectomy systems and drug-coated balloons (DCB). DCBs use the same antiproliferative drugs as drug-eluting stents (DES), but without the permanent scaffold left behind. However, drug-eluting peripheral stents are available and recently made major news as one of the late-breaking trials presented at the 2018 Transcatheter Cardiovascular Therapeutics (TCT) annual meeting last fall.

The Cook Medical Zilver PTX was the first drug-eluting, self-expanding peripheral stent approved by the U.S. Food and Drug Administration (FDA) in 2012. Five-year data for the Zilver PTX showed a primary patency of 66.4 percent in the superficial femoral artery (SFA), compared to 43.4 percent treated with angioplasty or provisional bare metal stent placement.[1] This was a big improvement over the standard of care and the Zilver became the market-leading peripheral DES.

However, the Boston Scientific Eluvia stent outperformed the Zilver PTX on all accounts in the IMPERIAL Trial,[2] the first head-to-head drug-eluting stent trial in the superficial femoral artery (SFA). Results from the 465-patient study were presented at TCT 2018, where it was one of the biggest news items from the conference.

"In the IMPERIAL trial, the Eluvia stent demonstrated landmark vessel patency and freedom from target lesion revascularization rates, preventing more than 95 percent of patients from needing a reintervention after one year," said William Gray, M.D., system chief, Division of Cardiovascular Diseases and president, Lankenau Heart Institute at Main Line Health in Wynnewood, Pa., and co-principal investigator of the IMPERIAL trial. "The Eluvia stent is a breakthrough therapy that marks a significant step forward in the treatment of peripheral artery disease, and now with its approval and commercial availability, it has the potential to make an immediate impact on the quality and value of care that physicians can provide to their patients."

Boston Scientific announced FDA approval for Eluvia the week of TCT 2018. The stent uses a drug-polymer combination to offer sustained release of the drug paclitaxel for a one-year timeframe. The Eluvia is built on the bare metal stent Innova stent platform, a self-expanding nitinol stent that has been designed for use in the superficial femoral and proximal popliteal arteries.

Other self-expanding peripheral stents have been cleared by the FDA over the past few years from Biotronik and Medtronic.

The latest stent to join the U.S. market is the Veryan Medical Ltd. BioMimics 3D Vascular Stent System, cleared in October 2018. The stent is indicated for the treatment of symptomatic de novo or restenotic lesions in the native superficial femoral artery and/or proximal popliteal artery. It has a three-dimensional helical shape designed to impart natural curvature to the diseased femoropopliteal artery and promote swirling flow and elevate wall shear. The company said this has a protective effect on the endothelium. The helical shape of the stent is also designed to facilitate shortening of the stented segment during knee flexion and mitigate the risk of stented segment compression causing localized strains that in a straight stent may lead to stent fracture and chronic vascular injury. FDA clearance was based on data from the MIMICS-2 IDE study.

New Approaches to Stenting Below the Knee

There are two new devices in trials that aim to address issues with vessel dissection due to angioplasty, and a completely transcatheter method of implanting a new arterial conduit to prevent foot amputation.

LimFlow SA developed a minimally invasive technology for the treatment of end-stage CLI when patients have no other options except for foot amputation. The LimFlow System uses an ultrasonic catheter placed in the tibial vein and another catheter in the tibial artery that are advanced toward each other. The ultrasound systems can detect the proximity of the other catheter to find a suitable crossover point between the vein and artery above the tibial chronic total occlusion (CTO). The valves in the vein are then cut using a special catheter to prop them in the open position. Self-expanding, covered stents are then used to line the entire vein and transfer point into the artery to create a bypass circuit to restore blood flow to the foot.

The FDA also accepted the LimFlow System into its Breakthrough Device Program, which is intended to speed patient access to breakthrough technologies that provide for more effective treatment of life-threatening or irreversibly debilitating diseases.

“This is the biggest advance I've seen for people at risk of amputation in my 25 years in practice,” said Daniel Clair, M.D., chair of the Department of Surgery at the University of South Carolina and the Palmetto Health-USC Medical Group, who performed the tenth case in the feasibility study on Jan. 25. “In the past, the only thing we had to offer these no-option patients was a segmental amputation of parts of their foot, and most patients ended up losing their entire foot. Major amputation has a very poor overall prognosis in terms of mortality and quality of life for patients and must be improved."

LimFlow completed its 10-patient U.S. feasibility study enrollment in early 2018, and the FDA expanded the study by an additional 15 patients and three new sites.

Intact Vascular Inc. has developed the Tack Endovascular System to repair artery wall tears that frequently occur as a complication of balloon angioplasty. It is designed as an alternative for repair of dissections while leaving a minimal amount of foreign material in the artery, which reduces mechanical stress on the artery and preserves future treatment options. Rather than using a full-sized stent, this system "tacks" the vessel wall with a very short stent of only a few millimeters. Several of these tack stents can be used to repair the vessel and avoid encasing the vessel with metal, which can lead to high restenosis rates.

A new appropriate use criteria (AUC) for PAD was released in December 2018 by a group of cardiovascular professional societies to provide guidelines for peripheral artery interventions.[3] It was jointly released by the American College of Cardiology (ACC), American Heart Association (AHA), Society for Cardiovascular Angiography and Interventions (SCAI) and the Society for Vascular Medicine (SVM).

The full guidelines are published in the Journal of the American College of Cardiology — http://bit.ly/2UoduWM.

These are the key highlights:

• Emphasis was placed on adhering to and exhausting medical therapy to achieve maximal benefit in situations where symptom management was desired or incidental disease was discovered. Other factors that were considered included symptom burden, anatomic distribution and ischemic burden.

• Factors to consider when evaluating appropriateness for intervention for hemodynamically significant renal artery stenosis include: the indication (i.e., chronic kidney disease, hypertension, cardiac destabilization or incidentally discovered), the severity of symptoms (including the rapidity of decline in renal function and/or response to antihypertensive medications), and whether renal artery stenosis is unilateral versus bilateral or affecting a solitary viable kidney.

• Factors to consider when evaluating appropriateness of lower extremity intervention for claudication include: previous medical therapy, lesion location (aortoiliac, femoral-popliteal or below knee), and whether the lesion is stenotic versus a chronic total occlusion.

• Both endovascular and surgical treatment for critical limb ischemia were considered "appropriate" by the rating panel for all anatomic subsets (aortoiliac, femoral-popliteal or below knee). Continuation or intensification of medical therapy is not considered a reasonable treatment in patients with this diagnosis.

• Appropriate peripheral procedures for asymptomatic disease were based on expert consensus and included specific scenarios where arterial access would facilitate other necessary cardiovascular procedures, some of which may be life-saving (e.g., transcatheter aortic valve replacement [TAVR], hemodynamic support devices, etc.).

• Factors that should be considered when choosing between endovascular treatment options include the anatomic location and length of the lesion, and presence of discrete/focal stenosis, diffuse stenosis or chronic total occlusion.

• Factors that should be considered when evaluating appropriateness of secondary lower extremity intervention for in-stent restenosis or bypass failure include presence of diffuse versus focal stenosis, whether the bypass is stenotic versus thrombosed, and whether the bypass graft is a vein or prosthetic conduit.