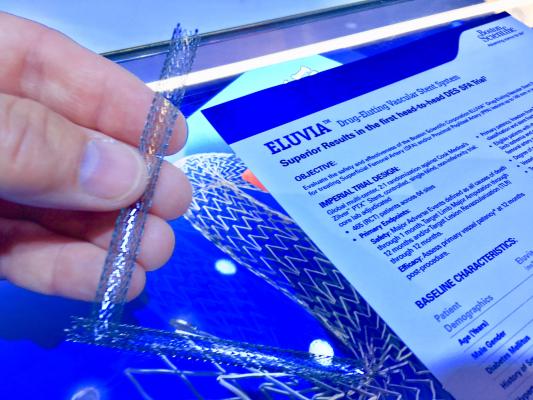 September 26, 2018 — Positive 12-month data from the late-breaking IMPERIAL trial was presented at the 2018 Transcatheter Cardiovascular Therapeutics (TCT) conference. This is the first head-to-head drug-eluting stent trial in the superficial femoral artery (SFA). Results were also presented at the annual Cardiovascular and Interventional Radiological Society of Europe (CIRSE) congress in Lisbon, Portugal. The clinical findings will be published in The Lancet.[1]

The IMPERIAL trial evaluated the Eluvia Drug-Eluting Vascular Stent System versus the Zilver PTX Drug-Eluting Peripheral Stent in patients with symptomatic peripheral artery disease (PAD). PAD occurs when fatty or calcified plaque builds up on the walls of the arteries of the legs, restricting blood flow and causing pain, swelling, ulceration and in some cases, the need for amputation of the affected limb. Stents are commonly used to restore and maintain blood flow, reducing symptoms and improving quality of life.

In the IMPERIAL trial, the Eluvia stent — which utilizes a drug-polymer combination to offer sustained release of the drug paclitaxel — exhibited superior rates of primary patency, a measure of the target vessel remaining unobstructed at 12 months, and thus able to provide sufficient blood flow to the lower limbs.[2] Patients in the Eluvia arm of the study also experienced higher rates of freedom from target lesion revascularization (TLR), thus reducing their need for repeat procedures at one year, when compared to those treated with the drug-coated Zilver PTX.

Key findings from the IMPERIAL trial include:

"These impressive clinical outcomes suggest that sustained elution of paclitaxel, delivered by the Eluvia stent, better matched the timing of restenosis in the SFA that can occur months later, thereby reducing the need for repeat interventions," said William Gray, M.D., system chief, Division of Cardiovascular Disease at Main Line Health, president, Lankenau Heart Institute in Wynnewood, Pa., and co-principal investigator of the IMPERIAL trial. "Based on these findings, we believe that the Eluvia stent can be a preferred therapy option when treating patients with arterial blockages in the superficial femoral or proximal popliteal arteries."

The IMPERIAL trial is a global, multi-center, randomized controlled trial that included 465 patients with SFA and proximal popliteal artery (PPA) lesions up to 140mm in length. It is the first head-to-head trial comparing two different drug-eluting stent systems for the treatment of PAD.

The Eluvia Stent System received CE mark in February of 2016. In the U.S., it is an investigational device and is not available for sale.